People say that if you like cars, you must love the car show Top Gear. Even more so when hosts like Jeremy Clarkson, James May, and Richard Hammond were on it. After Jeremy punched a Top Gear producer last year, he was fired from BBC and the three of them moved to Amazon.

Now that the new car show is on Amazon, the first episode will come out on November 18. The three of them will work together again on a car show called “The Grand Tour.” For 12 weeks, the episodes will be shown on Amazon Prime Video every Friday. Next month, the pilot episode of The Grand Tour will be shot in California for 70 minutes. 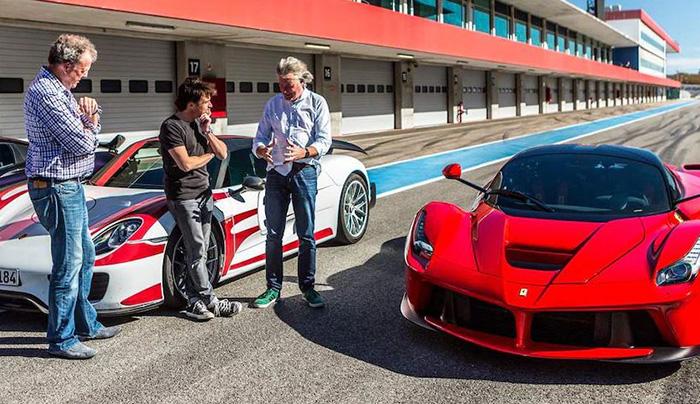 Since this car show will be filmed all over the world, the studio scenes will be filmed in a big tent that will travel with the production team. So far, the tent has been to Johannesburg, and for the launch episode, it will soon be in California. We still don’t know where the other studio scenes take place.

Amazon has put a 30-second teaser video on YouTube to go with the news of the launch date. Reports say that Hollywood stars like Charlize Theron and Matt Damon will be among the first season’s guests. Check out the official sneak peek-

Jay Marine, Vice President of Amazon Prime Video EU, said, “Customers have been dying to know when they can watch their favourite team back on screen, so we are very excited to announce the premiere date of one of the most anticipated shows in the world in 2016.” He also said, “The guys are having a great time shooting the show all over the world.”

“The Grand Tour” was a name that took a lot of time and money to come up with. The name “Gear Knobs” was also thought of at first, but they had to drop it because Top Gear had a clause that said the new car show couldn’t have the word “Gear” in it.

What Is A Control Arm Bushing ?
Top 6 Pickup Trucks Longest Beds That You Need Know
Tire Pressure Guide What Is The Recommended Tire Pressure For 51 Psi Max
Nebraska Tint Laws That You Should Know