Most of us don’t give much thought to the plastic caps on our car tyres, but they are very important because they keep rain and dirt out of the valves. They also make sure that your tyres don’t lose air as you drive.

A green cap on the stem of a tyre valve means that nitrogen was used to fill the tyres instead of just air. Nitrogen has been shown to keep tyres inflated longer and at a more stable pressure.

Many people who work with cars, like tyre dealers or technicians, repair shops, and some gas stations, say that nitrogen is the better choice.

These claims are based on the fact that nitrogen takes longer to leak out and that the tyres stay fully inflated for longer. Let’s look at what makes this gas so important. Normal air, which we breathe and use to fill up our car tyres, is made up of 78 percent nitrogen, 21 percent oxygen, and 1 percent other gases. Carbon monoxide and argon are two of the other gases.

When you add nitrogen to the tyres, the level of nitrogen goes up to 93 or even 95 percent. People just call this amount of nitrogen “pure.”

Consumer Reports says that nitrogen tyres lose 2.2 pounds per square inch (PSI) of pressure every year. This is more reliable than the loss of 3.5 PSI in tyres with air in them.

This is because the molecules in nitrogen are much bigger and move much more slowly than the molecules in compressed air. This means that nitrogen-filled tyres will keep their pressure for a lot longer.

Nitrogen is inactive, which means that it only has gas particles in it. The nitrogen that is pumped into the tyres is clean and dry. There are no water molecules in the tyre that could damage the aluminium parts.

More Benefits of Filling Our Car Tires with Nitrogen

When the air pressure in the tyres is right and stays the same, it’s easier to control the fuel.

Since the pressure stays the same and there is no water vapour in the tyres, they wear out a little less.

Nitrogen can’t be burned. Even though this isn’t as important, it’s still useful.

The Disadvantage of Using Nitrogen in Tires

Nitrogen has been shown to help tyres last longer, but it costs more to fill a tyre with nitrogen than with regular air.

Compressed air can be bought at many gas stations for a dollar or less.

Nitrogen is important for some cars, yes. Nitrogen is often used to fill car tyres. This is a common practise in the auto industry.

Some people think that nitrogen is the best choice for a smoother ride and less wear and tear on the tyres, even though it costs more.

Why The Valve Cap Is Important 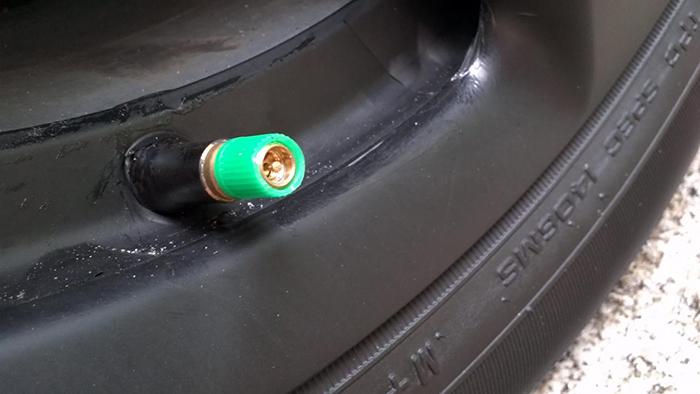 No matter what colour it is, the tyre valve cap keeps grease, ice, or road dust from getting on the valve stem.

When this junk gets stuck in the valve stem, it’s hard to pump air into the tyre. If the tyres don’t have a cap, air or nitrogen will slowly leak out, which will lead to a flat tyre in the end.

Here are some of the most frequently asked questions about these green caps.

How Do I Remove a Tire Cap?

Turn the wheel so the valve cap is on the bottom.

Use snub-nosed pliers to hold the bottom of the valve stem tightly.

Use a different pair of pliers to turn the cap until it comes off.

Where Can I Get a Nitrogen Refill for My Tires?

All of the tyre shops around the country. They can either sell a tyre that is already full or fill an empty one.

Nitrogen is often put into the tyres of some cars at car lots.

Can I Purchase Nitrogen for My Tires?

In the vehicle’s manual, automakers will write down the exact amount of air in each tyre. A sticker is also on the doorjamb of the driver’s door. On the sticker, you can also find information about how much weight the car can hold.

Use a pressure gauge to figure out how full your tyres are. This gives you the right PSI readings.

When the tyres are cool is the best time to check on them. Ideally before starting the engine in the morning.

Depending on how hot or cold it is outside, the tyre pressure could change by about 1 PSI for every 10 degrees.

When the temperature is high, the PSI records are high because black tyres absorb heat. The most important times to check tyre pressure are in the fall and winter.

As the days get shorter, the average temperature drops during these times.

The Rubber Manufacturers Association, which is a trade group for tyre makers, agrees that nitrogen helps keep tyre pressure up for longer. They also emphasize that using nitrogen should not replace regular tire pressure maintenance.

Even though nitrogen-filled tyres may need to be filled more often, we recommend regular tyre maintenance no matter what type of air is in the tyres.

How to Put Car in Accessory Mode?
Are Subarus Made In America
Air In Fuel Line Diesel Symptoms
How Tight Should Spark Plugs Be