All bike fans are in for a treat, because we’re going to show you the Harley-Davidson Road King Special, which the company just showed off in the United States. Well, every time we think about what new thing they might come up with, we’re left speechless, and this one has almost no chrome. Again, I’m speechless.

The first question that comes to mind is, “What would it be then?” A new look with a lot of matte black would be the answer. Places where chrome used to be will now be a colour called “Moody Black.” As we said, it has lost “almost” all of its chrome. The engine rocker boxes, tappet blocks, and push-rod tubes are the only parts that still have chrome. The “Moody Black” is also on the guards, exhausts, shields, engine covers, and airbox covers. The standard handlebars have been replaced with 9-inch-tall ape handlebars, and the windscreen has been taken off completely. 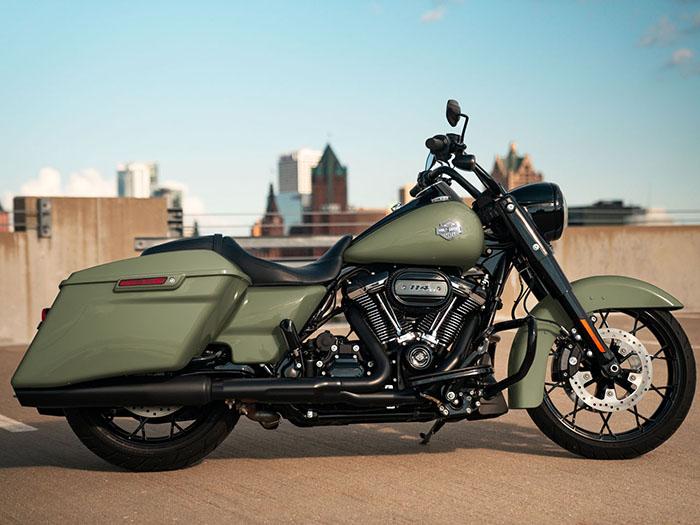 The same engine, the 1.750 cc Milwaukee Eight Engine, powers this beautiful piece. But, according to Harley-Davidson, it has 10 percent more torque and a more refined feel. There are five colours to choose from, and four of them are brand-new. These four are called “Vivid Black,” “Charcoal Denim,” “Olive Gold,” and “Hot Rod Red Flake Hard Candy Custom,” which is a great name for a colour. It’s clear that their creativity isn’t just limited to making motorcycles.

In addition to its new colours and chrome-free look, the Road King also has a brand-new dual-blending valve. The valve was first seen on Harley-Davidson bikes with Milwaukee Eight engines in 2017 itself. The Road King is the lightest Harley-Davidson in the FL range. We hope this one makes it to our shore.