The Honda Cliq is yet another scooter that Honda Motorcycle and Scooter India has put on the market in India. The Activa platform is used for this 110cc scooter, which costs Rs 42,499 (ex-showroom, Delhi). The Honda Cliq is made with the idea that it will be useful. This scooter needs to be tough, useful, comfortable, and easy to use in everyday life. The company plans to roll out Cliq in stages. Because of this, Rajasthan will be the first state to sell the Honda Cliq. The Cliq should be available everywhere in the country before the holiday season. Honda’s Tapukara plant in Rajasthan is where the Cliq will be made.

The Honda Cliq looks like it was made with function in mind as well. It’s made to be useful, so it has a bigger footboard and 14-liters of storage space under the seat. If you still need more space, you can also get an optional rear carrier. The Cliq only weighs 102 kilogrammes, which is 8 kilogrammes less than the Honda Active and the same as the Navi. With durability in mind, the Cliq has tubeless tyres with a block pattern and deep grooves for better grip and control in a variety of terrains. This scooter comes in four colours: Black, Morrocan Blue, Orcus Grey, and Patriot Red. 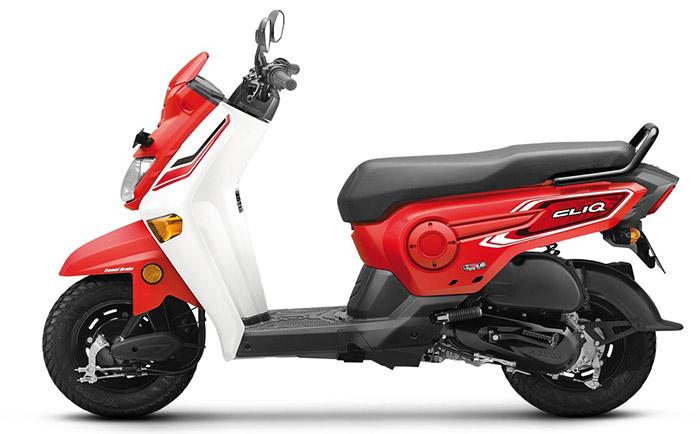 The Honda Cliq is powered by the same 110cc single-cylinder BS-4 engine that is in the Activa and the Navi. At 7,000 rpm, this engine makes 8 bhp and 8.94 Nm of torque. The fact that the Honda is utilitarian does not mean that it has cut corners when it comes to safety. The Honda Cliq has a Combi-Braking System (CBS) that brakes both the front and back wheels evenly even if you only press one lever. It also has a battery that doesn’t need any care.

Minoru Kato, President and CEO of HMSI, talked more about the idea behind Cliq. He said, “In India, six out of ten two-wheelers sold are in the 100-110cc segment. Automatic scooters have grown a lot in this segment and now make up almost half of the total size. This segment is ready for sub-segmentation because customer needs are getting more and more different. Honda, which is the leader in the scooter market, made CLIQ to meet the needs of customers and give them more comfort and convenience.

Who is it for?

The company says it’s a scooter for both men and women. And the low seat height, light weight, and ease of use will make it easy for new riders to get used to. There is also a charging port for people who use smartphones. Some of the parts that can be added to the Cliq are the floor cover, front screen, box centre, cap cover, and rear grip.

How Much HP Does A Dyno Tune Add
All The Cars From "Tokyo Drift Cars"
What Does The Check VSC Lexus?
How Much Does It Cost To Soundproof A Car