If you live somewhere with cold weather, it makes a lot of sense to get ready for icy roads.

Normal tyres and winter tyres are not the same thing.

People usually call them “snow tyres,” and they are made to keep traction on ice. But what’s different about snow tyres from other tyres?

Snow tyres are different from regular tyres because they are designed to work well in snow and ice. Snow tyres are made of rubber that can handle colder temperatures than all-season tyres and are made to give drivers better grip.

Using specific tread designs, they will help you get a better grip on the road in snowy conditions.

Engineers made them with channels that are wider than what you’d find on regular tyres.

How Are Snow Tires Different Than Regular Tires? 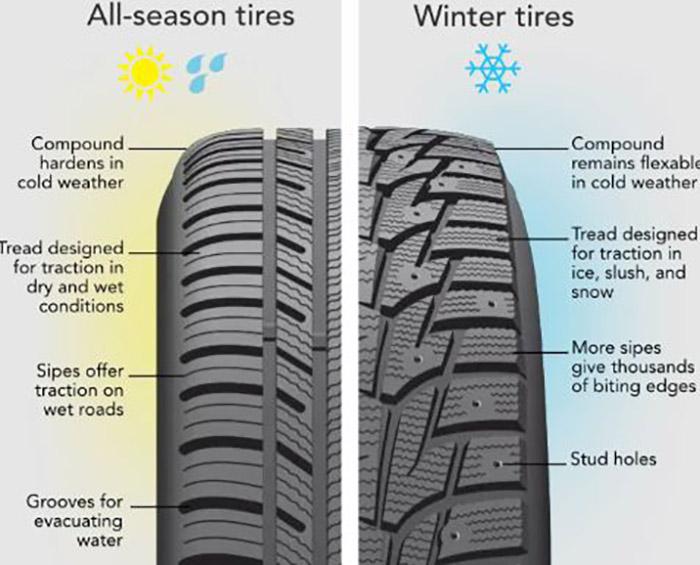 There are several ways in which snow tyres are different from summer tyres and all-season tyres.

To be called snow tyres, they have to pass a test of how well they grip the road. It’s called the Three-Peak Mountain Snowflake test, or 3PMSF for short.

When a tyre passes this test, it gets a special symbol that is put on the sidewall. When you’re comparing tyre brands, look for the symbol to tell them apart.

Manufacturers can’t put this on tyres unless they were made to be driven on in temperatures below 45°F.

In other words, they can keep their grip even if the temperature drops to 7 °C.

Studs are one of the most important things that modern engineers use to make snow tyres. Even cold-resistant ceramic studs have been used to make them.

Some brands put them right into the rubber of the tyre. Because the outside of ceramic is so hard, it can break through icy roads while you’re driving.

Only one thing is wrong with this kind of design, though. If you drive on bare pavement with tyres with spikes, you can do a lot of damage.

Most roads were not made so that cars with these tyres can drive on them. So, you need to check the laws in your area to see if you can use them on your car.

In places where the roads are usually frozen, it usually doesn’t matter if you have them on.

It’s a good idea to check with the government to see if they have laws against them.

You can call your City Hall to talk directly to the people who can help you.

Is There a Difference Between Snow Tires and Winter Tires?

If you look at the treads, you can tell the difference between snow tyres and other winter tyres. A real snow tyre will have a tread pattern that is made to pack snow, making it easier to grip.

Winter tyres don’t all have treads that gather snow as you drive. Some of them keep it from getting on your car.

Outside of snow tyres, all-season tyres are one of the most common types.

Winter tyres have bigger spaces between the treads than regular tyres, but not as big as snow tyres.

So, when you’re driving on a snow-covered road, you won’t hear as much noise. When you hit ice, they won’t help you get a better grip as much.

When the roads are icy, compacted snow makes it easier to hold on. How much it helps you grip the snow depends on how the snow is made.

The snow will help you hold on better the more it is warm and wet.

Some snow tyres even have rubber that likes water. They can keep water from getting in if there is water on the road.

So, driving in a place with both water and ice can be safer.

Most of the time, you can tell if you have a snow tyre by looking at the tread. They have treads with deep pits and a lot of empty space. There should be enough room between each of them to fit a penny on its head.

You can also check to see if your tyres have shoulder blocks.

This is another feature that was made to help pack down snow if you drove your car on an icy road.

Check for short blocks by looking at the outside edge of your tyre.

You can also measure the width of the tread and the diameter of the tyre.

When you do that math, you’ll get its aspect ratio. Most of the time, the aspect ratio of snow tyres is narrower than that of all-season tyres.

If you look closely at its rubber, you might see what looks like a lot of small holes.

This is called “siping,” and it also makes the tyres grip better on roads that are icy.

Even snow tyres won’t help you if the snow on the roads is hard and packed down.

We suggest that you bring either studs or chains with you. When things get rough, they can help you keep your grip when you need it most.

What’s the Difference Between Snow Tires and Regular Tires?

Snow tyres are made of different chemicals than other tyres. Special rubber is used to make tyres that work well in the snow. Because of this, they can keep their grip better when it’s cold outside.

The tread design is another way to tell a regular tyre from a snow tyre. Snow tyres are easy to spot because they have deep treads.

If you look at a regular tyre, its treads won’t look nearly as deep as those on a snow tyre.

If you have a regular tyre, the surface of the rubber won’t have any lines in it.

Siping is something that engineers made to help snow tyres grip the road better when there is water on it.

If you only look at the tyre, you won’t be able to see this.

Snow tyres often have studs on the surface, too.

Many places let you drive on the roads with studded tyres during certain times of the year. When the roads are frozen, they can punch through sheets of ice.

So, it can stop you from sliding when there is a lot of water and ice on the ground.

How Do I Know If I Have Snow Tires?

The best way to figure out what kind of tyre you have is to look at the code on it. Tire codes tell us how they were made to work in different situations.

Manufacturers usually put them on the sidewall, so it’s usually not too hard to find them. Look at the sidewall of your tyre to see if it has any symbols on it.

A capital S would show that it was made to work in snow.

The National Tire Manufacturer’s Association has a tyre code guide that you can look at. It will tell you what each symbol on your tyre stands for. So you can tell what kind it is.

The easiest way to tell which tyres are snow tyres by hand is to look at the tread. You can’t be sure, though, until you check its codes.

Snow tyres have a number of features that make them better for driving on ice and water.

The treads are the biggest difference between them and regular tyres. A snow tire’s tread is usually much deeper and wider than that of a regular tyre.

The tread design of a snow tyre is not the only thing that sets it apart.

When it’s very cold, rubber tends to get a lot harder, which makes it less sticky.

Snow tyres are made from special materials that don’t get as hard when it’s cold.

Some of them even put studs on the surface of the tyre to make it grip the road better.

Even if there is ice on top, the studs can still stay in contact with the surface. By punching through it, they can keep in touch with you, making sure you don’t lose your grip.

Small slices are also cut into the surface of the tyre. This is called siping.

These help the tyre keep water from getting into the middle of the tread. Plus, it can help pack down snow while you’re driving.

Lastly, snow tyres are usually narrower than tyres you would use in the summer.

This change is called a narrower aspect ratio in the world of mechanics. In practise, it makes your tyre cover less of the road.

It might not seem like that would help you keep your grip. But by putting your car’s mass in one place, it keeps it from floating on top of loose snow.

How well a snow tyre works depends on the road, the quality of the tyre, and how good the driver is.

Even on icy roads, having good gear won’t make up for not knowing what you’re doing.

When there is snow and water on the roads, you need to know how to drive a car safely.

Still, there was a lot of science behind how they were made.

When it’s cold outside, a well-made snow tyre will make it safer to drive. Their treads let snow pack into the middle, which gives them traction on ice.

They sometimes have studs.

So, if you’re driving on a thin sheet of ice, they can still touch the road. So, if you have them in your car, you won’t slide around as much.

Why Should You Get Snow Tires During the Winter

If you have all-season tyres on your car, you might not think it’s necessary to get snow tyres.

But an all-season set of clothes won’t help if there’s a lot of snow on the ground.

Snow tyres are made with several features that make them easier to control in the winter.

When the tire’s aspect ratio gets smaller, the area where your car touches the road gets smaller.

So, it can push through deeper layers of snow without losing contact with the road. You should get snow tyres if you live in a place where it gets below 7 degrees F often. They will make it safer for you to drive your car.

How To Rebuild A Transmission
11 Best Car Wax For White Cars That You Need Know
How Much Brake Fluid Do I Need
How Tight Should Spark Plugs Be ?