Wheel-carrying hubs are connected to the chassis by control arms, which are a vital part of vehicle assembly. Rubber bushings and ball bearings are used to connect the control arm (also known as the A arm) to the chassis and the wheel assembly, respectively, to provide a flexible connection.

If you have a faulty control arm bushing, you need to know how long you can keep driving. You’ll learn how far you can go with faulty bushings and whether the danger is worth it by reading this article.

What is a Control Arm? 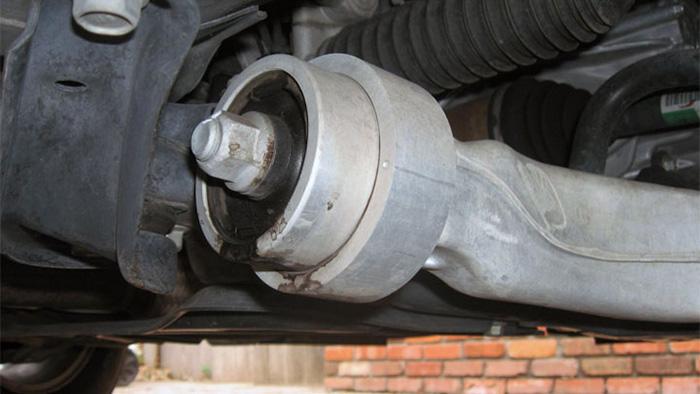 To connect the vehicle’s structure to the steering knuckle, the control arm is used. Because of its resemblance to a capital letter A, A arms have been given this moniker. To steady the vehicle, control arms play a crucial part in the steering system by dampening the ride and coordinating the steering and suspension.

Some feature changeable ball joints and bushings, while others require a complete replacement.

The first type is often more durable and can survive as long as the car itself if protected from corrosion and physical harm. However, because they’re built to last longer, their replacement costs are higher.

Pre-assembled control arms save money since they are durable enough to handle proper vehicle maintenance, but they are also inexpensive to replace if the bushings wear out. Faster bushing deterioration can be caused by driving through potholes, off-road, and accidents.

What are the Control Arm Bushings?

Bushings for control arms are constructed of two metal cylinders sandwiched by a thick layer of rubber. Once the bushing is in position, a bolt is inserted into the inner cylinder to hold it in place.

They’re designed to provide a strong connection between parts, but one that isn’t fully rigid. In general, the ride is more pleasant thanks to rubber’s ability to absorb vibrations and noise from the suspension system. It is only after 40, 000 miles, however, that the rubber becomes brittle and needs to be replaced.

What are the Symptoms of Bad Control Arm Bushings? 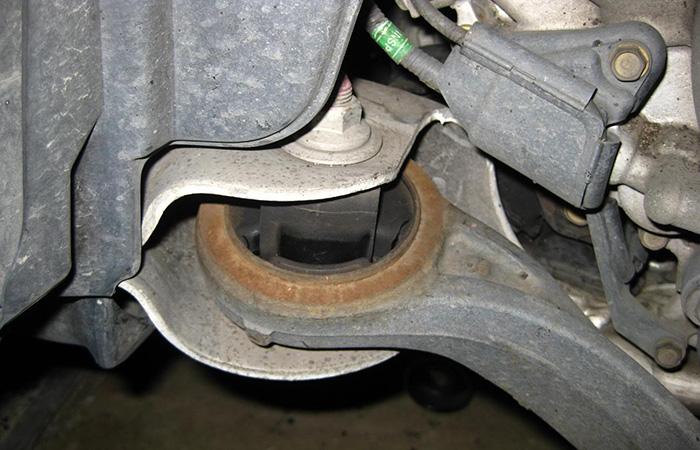 We need to know how bad the control arm bushings are in order to figure out how long you can drive with them. There are several variables to consider when determining how far you can travel.

Driving a vehicle with faulty suspension and braking systems is always a risky proposition. To ensure the safety of yourself and other road users, get your broken bushings fixed as soon as possible.

As previously stated, the control arm is an important component of the steering system. Because there is no dampening mechanism in place when rubber bushings fail, the vibrations are transmitted to the steering wheel. Acceleration will amplify vibrations, so look for an issue with the bushings if that is the case.

Additionally, you may suffer steering drift, which causes the wheel to move to one side or another without your permission. As you have to have a firm hold on the steering wheel to avoid a collision, this will rapidly tire you out.

Because of mismatched wheels, control arm bushings aren’t often to blame for this issue. You can’t correctly align your wheels if your bushings fail, resulting in uneven tire wear.

On the front wheels, tire wear may be easily examined. Turn the steering wheel completely to one side when the automobile is parked. The difference in wear will be noticeable to the naked eye or by moving your palm across the tire if the difference is large enough. The tail spike of a micrometer caliper can be used to measure the depth of tread across the width of your tires for a more precise reading.

It’s impossible to define this condition in any other manner than to term it an unusual sensation. For example, when you step on your breaks, the automobile will bounce back and forth until you release the pedal, generating a vibration.

How Long Can You Drive With Bad Control Arm Bushings? 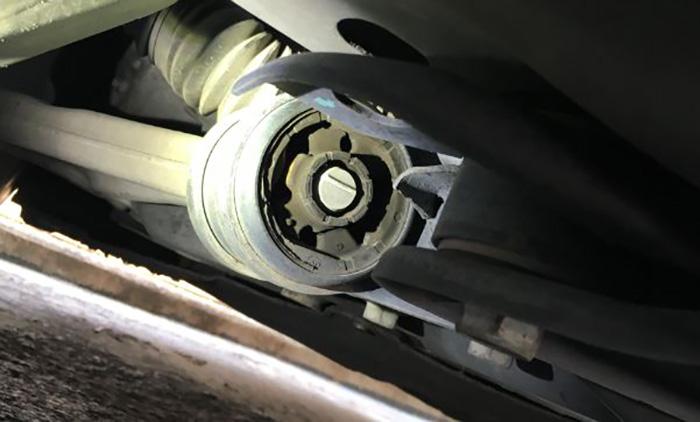 My response may not be as straightforward as you had hoped, but I would be doing you a disservice by providing you with some random number.

Depending on the type of vehicle, manufacturer, and driving conditions, a control arm bushing’s life expectancy might vary greatly. Control arm bushings, based on my research, are projected to endure between 40 and 100 thousand kilometers.

It’s reasonable to expect the bushings to degrade over the course of such a long lifespan. Even if you don’t hit potholes or the curb, or are in a minor accident, your bushings will wear unevenly, so don’t anticipate them to all break at once.

The good news is that they’re long-lasting enough that you won’t have to deal with the same issues on the opposite side. As a rule, it is less expensive and less time consuming to replace bushings in bulk rather than individually.

To be on the safe side, I’m going to tell you to get new control arm bushings as soon as you start experiencing any issues. Having said that, I recognize that funds are limited and that the bushing problem isn’t as critical as some have made it out to be.

My daily driver has been exhibiting the braking issue. It wobbles and clatters a little bit when I hit the brake pedal since the car’s balance is off a little bit. A year and thousands of miles later, it’s still happening. I’m not going to spend the money to replace two double wishbone control arms until I have steering issues.

How much does it cost to replace a control arm?

According to the type of car and suspension type, parts might cost anywhere from $600 to $700 per. Around $200 is expected to be spent on labor. The alignment of the wheels will cost an additional $200, on top of the already high price.

Can control arms cause death wobble?

Death wobble can be traced back in part to the introduction of control arms into the equation. If this happens to you, drive cautiously or have your car towed to a shop for a thorough examination.

How long does a control arm last?

The control arm is only as strong as its weakest component if it lacks replaceable rubber bearings and a ball joint. The lifespan varies, but you can count on getting between 50,000 and 80,000 miles out of it before it needs to be replaced.

Can I drive with a broken control arm?

Technically, you can, but I strongly advise against it, much like with the fractured ball bearings. You may end up stranded on the road with an engine or transmission problem, but suspension issues are more than simply an expensive bill from the technician. You could, in the worst case situation, lose control of the vehicle and cause an accident for which you are solely accountable.

Are control arms hard to replace?

Control arm replacement is a relatively challenging task that varies depending on the sort of control arm you’re working with. It’s far simpler to swap out a single MacPherson strut than a pair of double wishbones. Hydraulic jacks can be used to raise the car, and a substantial object can be used to keep the vehicle elevated. A good socket set and anti-rust oil are a necessity.

For a brief yet thorough explanation of the task, refer to the following guide:

Is it OK to replace only one control arm?

Replacing merely one control arm is perfectly acceptable when dealing with a double wishbone system or a single side of the vehicle. Maybe not the best idea, though. As long as you haven’t been in an accident, it’s acceptable to assume that both sides of the car will eventually fail in a symmetrical fashion.

Control arms should be replaced in pairs, just as tires, brake pads, brake discs, and shocks. A higher overall cost of work and additional trips to the mechanic are the only outcomes of replacing individual parts.

Does the car need an alignment after replacing the lower control arm?

One or both control arms must be replaced to maintain the wheels aligned properly after this procedure. Tires will wear out unevenly and handling will be a problem if you don’t have it.

How much does a control arm bushing cost?

The cost of new bushings can range from $5 to $150 for high-end sports automobiles. There will always be a higher labor cost because the process is so time-consuming and difficult.

Driving a car with worn control arm bushings is a concern, but you may go a long way before the chance of an accident is significant. It’s not just that other parts wear down faster when they’re stressed, but you’re also at greater risk of an accident when they’re completely deteriorated. Replace bushings if necessary after weighing your alternatives carefully!