The engine’s head gasket is the most heavily loaded seal. There are times when the gasket will blow up in an engine that has been well-cared for, but this is rare. It’s rare, but when it does happen, it’s quite dangerous. So, is it safe to drive if your gasket has blown?

No. Don’t even try to get behind the wheel. Any automobile owner knows that repairing a blown head gasket is a huge undertaking that comes at a high price. Due to internal stress and engine damage, driving with it is dangerous. If you have no other option but to drive, only do it in an emergency. When the head gasket isn’t properly maintained, cracks begin to form, which spread over time if they aren’t taken care of. Once you’ve found a crack, all you’ll need is a sealer, which is much less costly. Once you find the leak and seal the crack, you’re good to go.

What Happens If You Drive With A Blown Head Gasket?

The engine block and cylinder head are joined by the head gasket, which is a component of the combustion chamber. In order to convert the fuel and compressed air into energy, it must be contained within the cylinder. Coolant and oil are kept out of the combustion chamber to prevent them from interfering with ignition. Essentially, the head gasket serves as a seal between the bottom and top parts of the engine. When the engine is running, it also serves to channel coolant to keep it at a constant temperature.

When a head gasket blows, fluids and gases are allowed to mix and enter areas they are not supposed to. The coolant can mix with the combustion gases, and the other way around. It can also allow oil to leak into the chamber, which is not the ideal location for it. Liquids and gases can be hazardous if they are placed in the incorrect locations. An additional common query is “How long can you drive on a blown head gasket?” in light of the foregoing. Is there a straightforward answer to this question? Is your head gasket leaking or is it completely ruined? A sealer like K-Seal is a good option if it’s the former. You can’t get very far when it blows, and continuing is perilous as well.

This means that the engine’s pistons lose their ability to move due to a drop in pressure caused by an engine head gasket blowout. The lack of power is immediately apparent to an experienced driver. One or both of the following issues may arise for you: 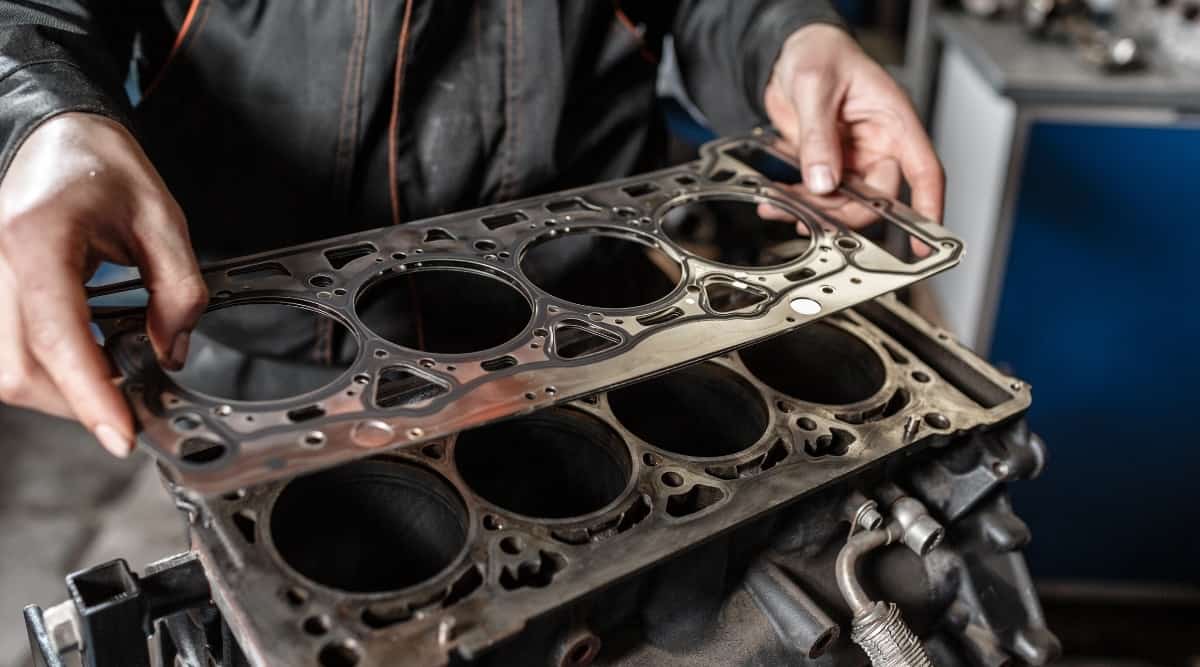 1. Allows Coolant To Escape The Engine

When the engine’s gasket blows, the coolant can leak out and be lost. Your engine will overheat if you keep driving in this manner. If you decide to look beneath the hood, be aware that the escaping coolant is quite hot and could result in burns. It can also cause a fire in the worst-case scenario.

2. Allows Coolant To Enter The Cylinder

The engine oil and gasoline combine with the coolant as it enters the cylinder. You can see the white smoke flowing out of your vehicle’s exhaust pipe as a result. Engine damage, including corrosion, can occur when too much coolant is mixed with the engine oil, preventing the cylinders from being adequately lubricated. If this happens, you’ll have to start from scratch and rebuild your engine. Finally, here’s an article about how much it costs to rebuild an engine.

Oil levels are reduced when the engine oil leaks, which has a negative impact on lubrication. Camshafts and bearings are damaged as a result of this.

When coolant mixes with combustion chamber gas leaks, it creates a unique cooling system pressure. As a result of the temperature fluctuations caused by the gases and leaking coolant, the area immediately surrounding the leak will deteriorate and break over time.

Why Do Head Gaskets Blow?

Head gaskets, which are supposed to last a lifetime, blow if you don’t grasp their job in the engine. Because it sits between the engine block and the cylinder, it acts as a seal to keep the coolant, which can range in temperature from ice cold to room temperature, apart from the hot combustion gases that are under constant high pressure.

Your head gasket may rupture for the following reasons:

Cracks and leaks might emerge on the surface due to the material’s wide temperature ranges and large surface area. To avoid more significant problems, it is important to identify these leaks as soon as possible. Overheating can cause head gaskets to rupture. Metal parts of the engine block expand to their maximum when overheated, putting pressure on the head gasket, which eventually fails.

Engine pre-ignition, which occurs when cylinders run out of time, is another common cause of a burst head gasket. Pistons, valves, and the head gasket are all put under stress.In order to avoid a head gasket from bursting, it is necessary to perform regular maintenance on the engine. Also, to ensure optimal performance from the coolant. How Can You Identify If A Head Gasket Is Blown?

When you open the hood, you won’t be able to see the head gasket since it acts as a seal. Dismantling the engine to find a blown one would be extremely tough. The symptoms of a blown head gasket are critical to identifying the problem.

On long journeys, your engine overheats after your head gasket blows. The lack of coolant, which would otherwise mix with the engine oil and other fluids, is a major contributing factor. The heat created by the combustion process was beyond the capacity of the coolant that was there. In addition, the dirty coolant cannot be cooled by the car’s radiator. Overheating your engine causes metal components to expand beyond their optimal size, resulting in cracks in the structure. In the worst case scenario, the components are destroyed, and new leaks are created that require a complete engine rebuild.

Coolant spills into the combustion chamber after a leaking head gasket. The white smoke that emanates from the exhaust pipe is the result of it burning in conjunction with the fuel.

In addition to white smoke, a cold start can produce a sweet smell and continue to emit white smoke even when the engine is heated and running. When the head gasket is blown, the white smoke from the exhaust might be huge and erupt.

Coolant might leak under the exhaust manifold if the head gasket has an exterior leak. When the engine has warmed up, this happens. If the leak is not near any cooling hoses, then it is most likely coming from the head gasket. To find the leak, you may need to use a UV dye and an ultraviolet light.

Bubbles In The Coolant Reservoir

The coolant can be contaminated by combustion chamber gases if the head gasket is leaking or blown. It appears as if the coolant reservoir is boiling, but it is actually at the same temperature as before. The reason for this is that gases are finding their way into the reservoir in search of an exit. An Engine Combustion Leak Detector can detect the presence of gases. This is the simplest and most reliable method of determining if a head gasket has failed.

As a result of the coolant seeping into the combustion chamber, oil might take on a milky white tint. Using your dipstick, you can verify this. As a result of the increased friction caused by coolant in the oil, engine components such as the cylinder walls and the crankshaft and camshaft wear down more quickly. Pitting can occur even while the engine is not operating because the coolant in the oil corrodes the metal surfaces.

Pressure in the cooling system can indicate a blown head gasket, as can the loss of pressure when the system is pressurized. The head gasket or other leaks could be to blame for this loss of pressure, which is why this test isn’t conclusive. Evaluating the amount of gas that escapes from the combustion chamber through the head gasket when doing a leak down test is another way to check for a damaged head gasket.

Watch for white deposits on the spark plug as another inconclusive sign of a ruptured head gasket. This article discusses how to remove clogs from your spark plugs. In addition, there are other problems that might lead to the same effect, so you may need to be on the lookout for others.

Is It Worth Fixing A Blown Head Gasket? 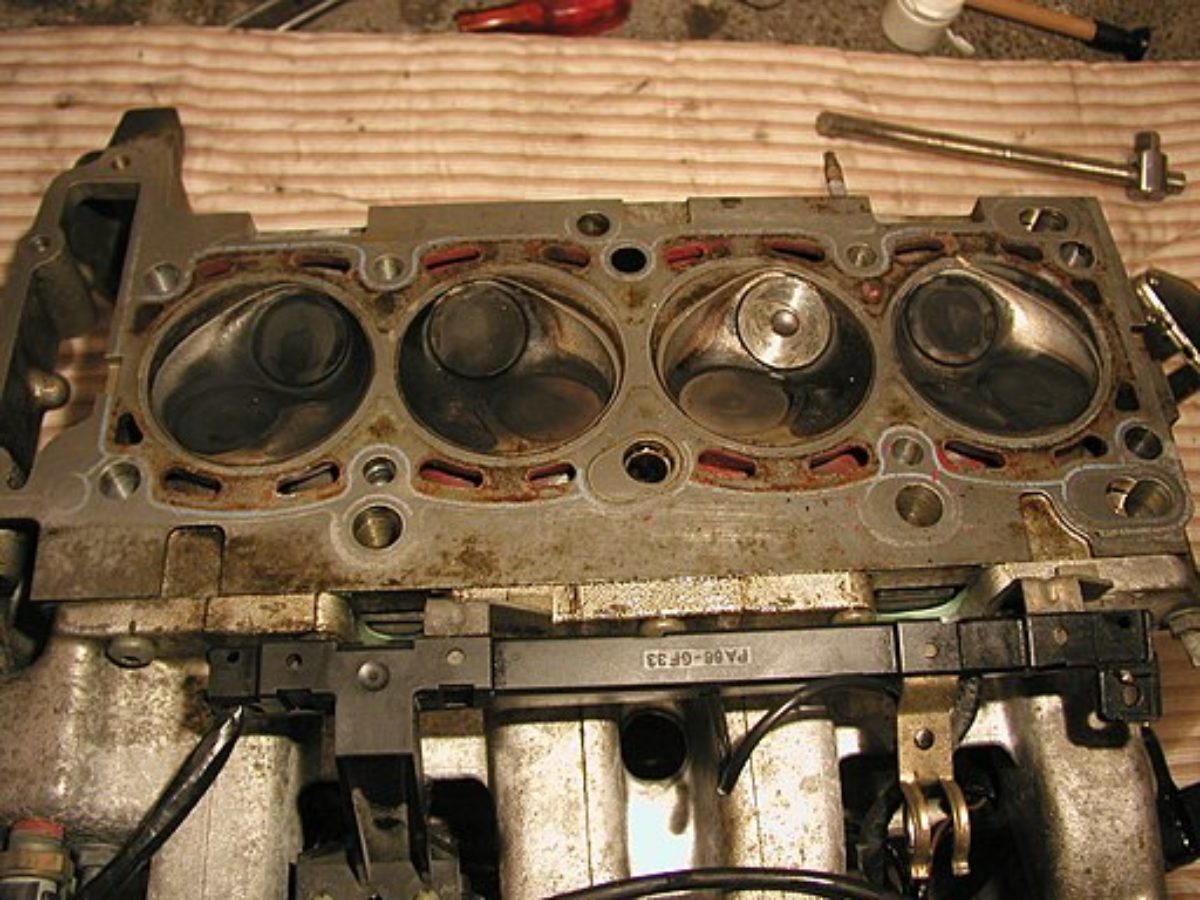 You can’t just keep driving with a blown head gasket. As a result, an engine rebuild will be necessary in the near future. It doesn’t have to be expensive if you get it fixed on time. However, there is a factor of the vehicle’s age and worth to consider. You have the option of either spending money to repair a blown head gasket or having the vehicle totaled. You may learn how to mend a blown head gasket without having to replace it by reading this article.

How Long Will My Car Last With A Blown Head Gasket?

Your engine’s health and the severity of the leak determine the response. A month is ideal, but it’s better to get the gasket repaired or replaced sooner rather than later. An engine failure may occur after 30 days and necessitate costly repairs. Drive with the heat on high while you wait, so that the engine’s heat is used to keep the car warm. As a result, the engine block’s temperature drops.

How Much Is A Head Gasket Repair Going To Cost Me? 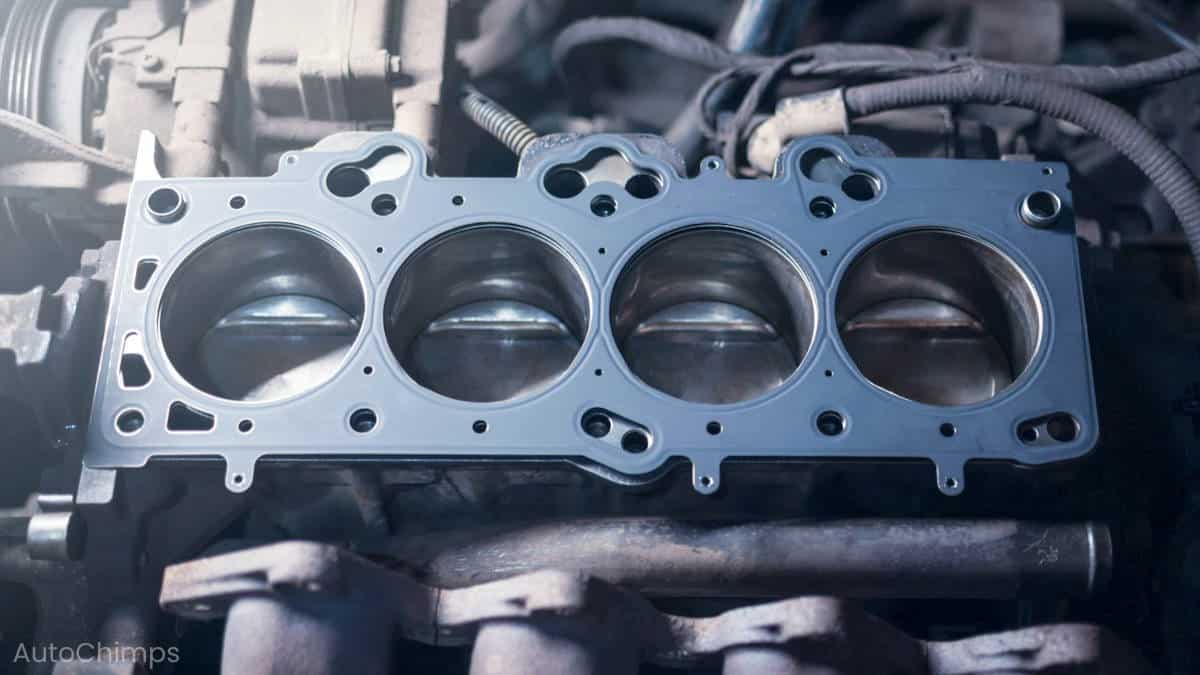 You may expect to pay anywhere from $1000 to $2000 for a normal repair of a head gasket, which includes both work and knowledge. In addition to the vehicle’s make and model, there are a number of other considerations to bear in mind, such as:

head of the piston

Cylinders are arranged in banks.

The engine has been damaged.

The cylinder head has been damaged.

Other substitutes are also available.

The price of a new head gasket is typically between $100 and $200. However, the cost is incurred in the form of labor. Additionally, engine block and cylinder repair costs have a significant impact on final costs. If either one is broken, a new head gasket will accomplish nothing until the other is also fixed. You may find out more about it by clicking here!

A blown head gasket isn’t a random occurrence. A small leak develops into a major problem with the head gasket. When the leaks are discovered early on, they may only require a simple sealant. Eventually, it might lead to engine failure, necessitating a complete rebuild. To make matters worse, once the cost of the car is raised by the rebuild, you have to evaluate whether or not it’s worth repairing. As a result, finding leaks as soon as feasible is critical. Driving about with a blown head gasket is not safe in the meanwhile. It can lead to a number of issues, the most obvious of which is an overheated engine.

A seal, the head gasket is buried deep within the engine and cannot be seen without dismantling the engine.As a result, you should get familiar with the signs of a leaking or blown head gasket.There are many methods to tell whether you have a leak, from white smoke coming from the exhaust to an overheated engine, milky oil, and bubbles in the coolant reservoir. Some are decisive, while others are merely suggestive. You should seek the advice of a professional.