How often should I change my cabin air filter? is a question that both long-time car fans and teens with their first car often ask. Many drivers don’t even know what a cabin air filter is, so let’s talk about how it works and how often you need to change it to keep your engine healthy.

Most car cabin air filters need to be changed every 15,000 to 30,000 miles. In addition to the differences between car brands, where you live and how you use your car can also have a big effect on how often you need to replace the cabin air filter.

Since not every car is the same, the filters on some cars last longer than on others. Let’s look at what signs to look out for, and if you don’t want to pay a mechanic, we’ll tell you how to change the cabin filter yourself.

As we’ve already said, you should change your cabin filter every 15,000 to 30,000 miles, but how soon you need to do that may depend on a number of things.

If you live in the country and drive on rural roads with lots of bugs, pollen, and dust, your filter won’t last as long as if you lived in a city. Even though city cars are exposed to more pollution, their cabin filters tend to get clogged up with a lot less dirt and dust.

People who live in places with a lot of sand and dust will have to change their cabin filters more often, since sand and dust are the main things that cause air filters to get clogged.

Because of this, luxury cars in places like Dubai and Abu Dhabi stay in closed garages when no one is using them. This is different from Beverly Hills, where BMWs and Mercedes Benzes are often parked on the street.

Car manufacturers usually say that you should change your filter every 15,000 to 30,000 miles. This is because they test their cabin filters in a variety of simulated conditions.

Consult your car’s manual and keep track of how many miles you drive to get the best idea of when to change your air cabin filter. You don’t want your next filter change to be caused by a broken AC or an overheated engine.

What Happens If You Don’t Change Your Air Filter? 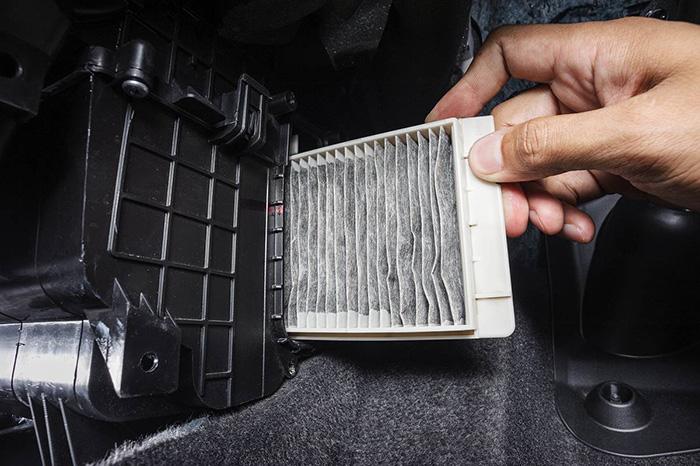 The cabin air filter is the part of your engine that cleans the air that flows through your car’s HVAC system. Your cabin filter keeps you from breathing in pollen, dust, bacteria, and other particles while you drive.

Your car’s cabin filter does more than just control how well your car’s interior can breathe. It also cleans the air that your car uses to cool its engine. If leaves, bugs, and other things you find on the road get stuck in your air filter, your engine could get too hot.

On some cars, a cabin filter and an air filter are very different, but on most cars, they are the same.

Most car companies combine the two, so driving a car with a bad filter will cause twice as many problems.

Your gas mileage will probably go down as your engine starts to use more gas to make up for the lack of oxygen. If your car has a carburetor instead of a computer that figures out how much air and gas to mix, it might not start at all.

Your engine might not start or might misfire because the lack of air will cause fuel that hasn’t been burned to build up and leave residue in your engine. After a while, this gunk will build up on your spark plugs and make your engine misfire, jerk, or refuse to start.

You might feel and hear strange things coming from your car, such as popping and coughing sounds when it’s not moving. When soot starts to damage your spark plugs, it makes these sounds.

You might see that the “Check Engine” light is on. Because there isn’t enough air, carbon will start to build up on your engine. At this point, you should have a mechanic check out your motor.

Your car may have less power when you push down on the accelerator, and it may sometimes jerk and rock. Most engines need 10,000 gallons of air for every gallon of gas. If you don’t have enough air, your car won’t be able to go as fast.

How Do You Know if Your Air Filter Needs Changing?

Aside from the above warning signs of engine trouble, there are many other red flags that will let you know if your air filter is broken.

Pay attention to these signs because a worn-out or too-full air filter can hurt the life of your engine. It could damage parts that are much more expensive to fix than your cabin air filter.

The parts of your car’s engine that start it up and keep it running are directly connected to the air filter. So, most of the signs that your air filter needs to be changed will come from how your car starts up, how it rides, and how well it runs.

For example, if you smell gas when you start your car, that could mean that either the fuel injection system or the carburetor is using up the fuel that is still in your engine.

As your car uses more gas to make up for the lack of oxygen, you will have extra gas when you turn it off. The next time you start your car, it will try to burn or get rid of this extra through the tailpipe.

Another example is when you see black smoke coming out of your car’s exhaust. This can also be caused by unused fuel that is stuck in your engine.

You should get this fixed as soon as possible, or your engine could be seriously hurt. This is especially true if you hear loud pops or see flames coming out of the tailpipe.

Some small signs that the cabin air filter is clogged are:

When your car windows are up, there is little to no air flow inside.

There is a faint smell inside the cabin that stays there for days.

Whining noises coming from the engine as you drive

How to Change a Cabin Air Filter

Opening up the engine bay of a car is scary and takes a lot of time if you’re not a mechanic, but you won’t have to do that to change the cabin air filter.

The filter is behind the glove box in your car. Here’s how to get to it and take it out:

Open your glove box and clean it out.

If you reach into the glove box and move your hand to the right, you will feel a limiting arm. Move it around until it falls off the pin.

Squeeze the back and front of your glove box until it’s free from the side clamps. Take it out of the car.

You’ll see a front panel. Behind it will be where your air filter is.

Release the side latches on the faceplate and pull it off. Then pull out the old air filter.

Use a vacuum and a damp towel to clean the air filter chamber. If you look inside and see a seal or gasket that is broken, you should replace it before putting in the new filter.

Put in a new air filter that fits the make and model of your car. It should come with a new faceplate that you can put on in place of the old one.

Replace the glove box and use the limiting arm to keep it in place.

In conclusion, we hope that you now know how important it is to take care of your car’s cabin air filter so that you can have a long and pleasant relationship with your car.

Reasons Why SUV Tinted Windows
How To Tell If Fuel Injectors Are Clogged
Is It Possible To Fix Scratched Rims?
Do Windshield Shades Work