Finding a leak in one of your car’s tyres is annoying, and you often don’t notice it until you need to leave! A tyre plug is a quick fix that will get you back on the road. Let’s talk about what a tyre plug is, how it works, when you should use it, and for how long.

A tyre plug by itself should only be used as a temporary fix, and only for as long as it takes to get the car to a shop or other place where a proper repair can be done. Long distances should not be driven on a tyre that has a hole in it.

Now that you know the quick answer, let’s talk about the basics of plugging tyres so you know when and why plugs should be used.

How Long Can a Tire Stay Plugged? 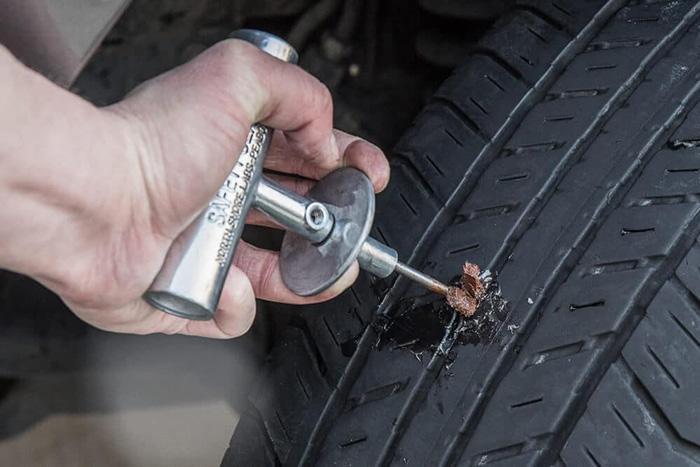 As was already said, a tyre plug is a temporary fix that is only meant to get you to the shop where the real problem can be fixed. But this doesn’t always mean that the tyre needs to be changed.

Depending on where the hole is, a plug and a patch might be all you need to get back on the road safely.

A plug alone is not a good long-term fix, but a plug with a patch is often a good choice. In fact, the National Highway Traffic Safety Association (NHTSA) thinks it is the only option that is safe.

People often call these “plug-patch combos” because the plug is attached to a patch. But they are much harder to put in than a plug by itself!

In other words, it’s not something you want to deal with while you’re standing by the side of the road.

To use a plug-patch kit, you have to take the tyre off the rim and look at it carefully. Once the hole is found, the area is cleaned, and the patch is put on the inside of the tyre. The plug is then pushed up until it is level with the tread. Most of the time, this is done by a trained technician at a shop.

When used right, the combo kit is said to last between seven and ten years. But that doesn’t mean you shouldn’t check the tyre often for normal signs of wear and tear as well as old or new holes.

When to Plug Tires 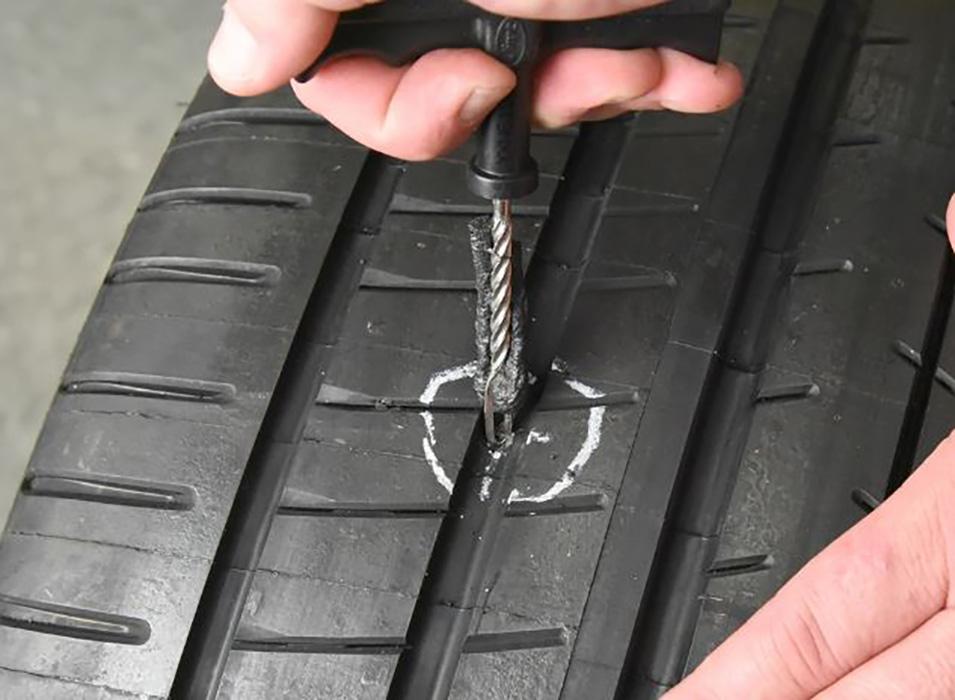 A tyre plug is something that expands and gets stuck in the hole. The expansion helps make a seal so that the plug doesn’t suddenly pop out.

The U.S. Tire Manufacturers Association says that a tyre can only be plugged if certain things are true.

The hole in the tyre must be in the tread area. A plug will not work if the hole is on the sidewall.

The hole can’t be bigger than 14 inch, or 6 millimetres, in diameter. If the hole is bigger, you shouldn’t try to patch the tyre.

Also, it’s not a good idea to plug a tyre that has already been fixed, because the quality of the tyre has gotten worse over time.

When all of these things are true and the hole is mostly straight, a plug will work best (those at an angle will be more difficult to plug).

If your tyres have a warranty, you should read it before you try to fix them yourself, even if it’s just a quick fix to get you to the shop. Your warranty could be void if repairs are done wrong.

If you can’t find your warranty, you can call the store where you bought them to make sure.

Think about how good your tyre is as a whole. If the tread is very worn or there are a lot of holes in the tyre, you shouldn’t plug it because the tyre is already in bad shape. When it comes to replacing tyres based on tread wear, the rule of thumb is that you should have more than 2/32 of an inch of tread left.

Try the penny test at home to see how good your tread is.

Take a penny, turn it over so that the head of Abraham Lincoln is facing down toward the tyre, and put it in several places on the tread.

If the tread always covers Lincoln’s head, the tyre has more than 2/32 inch of tread left.

If you can see his head, it’s worn out and needs to be replaced.

Remember that your tyres are the only part of your car that touches the road. Worn tread will cause a lot of problems that a plug can’t fix.

Rules for Plugs and Patches

Even though combo kits can be used, the hole must still be on the tread and no bigger than 14 inch (6mm) in diameter to qualify for this type of repair. If the tyre doesn’t meet these standards, it needs to be changed.

Now that you know how to fix a hole, you might be wondering if there are ways to keep holes from happening in the first place.

You can get out of a tight spot quickly with a tyre plug, but you can also avoid getting a flat tyre by following the tips below.

Make sure your tyres have the right amount of air in them. Most of the time, you can find the tyre pressure rating inside the door jamb on the driver’s side.

Try to avoid things like debris and rough weather. If you can, change lanes when you see trash on the road ahead. Never make a dangerous move to avoid trash, as this can cause an accident, and keep track of potholes and other problems on your usual routes so you can avoid them in the future.

Look over your tyres. Make sure your tyres are in good shape to start with. Tires that are worn out are more likely to get damaged and are less safe in general (remember the tread rule). Do not drive on tyres that are too worn or damaged, as this greatly increases the chances of flats, blowouts, and serious accidents.

You should never use a tyre plug alone as a long-term fix. The only acceptable repair is a plug/patch combo kit, and more work should only be done if the hole is small (less than 14 inch or 6mm) and on the tread (not shoulder or sidewall).

Even though the combo kits can last for a long time, they are not a good replacement for tyres that are worn out. If the tyres are worn, it is safer and better to replace them than to try to fix them. Even if the tyre is fixed, it still needs to be checked and maintained just like tyres that haven’t been punctured. Tires still need to be taken care of after the repair.

Even though you can’t be sure you won’t get a flat, there are ways to make it less likely.

Fill your tyres to the right pressure, which is usually written on the driver’s side door jamb and can be found in the manual for your car.

Pay attention to your car as a whole (regularly inspect your tyres visually, pay attention if the tyre pressure monitoring system, or TPMS, light appears on your dashboard, and address these issues as quickly as possible).