More and more people are buying electric cars. The Nissan Leaf and the Tesla Model S are the two electric cars that have sold more than 400,000 units so far. But when it comes to battery-powered cars, there are concerns about charging and the range of the battery. “How long does it take to charge a Tesla?” is one of the first questions most people who are interested in EVs ask.

After all, you don’t want to be stuck on the road because the battery in your car ran out, do you? Most electric cars are set to charge to 80 to 90 percent, but you can change how full the battery charges from the charge settings menu. It takes less time to charge the car from 10% to 50% than it does to charge it from 80% to 100%. The reason is that the car loses power when it tries to charge all the way up.

Charging a Tesla car is the same as charging any other electrical device. Just plug it into a wall outlet, and it will draw power from the outlet until the battery is full. It’s that easy! But charging stations aren’t nearly as common as gas stations, which are everywhere.

The charging system for your Tesla will depend on the model you have, whether it’s a Model X, Model 3, or Model S, and the battery that’s already in it. For example, a 100 kWh battery gives the Model S Long Range an EPA range of 370 miles but only 325 miles for the Model X Long Range. 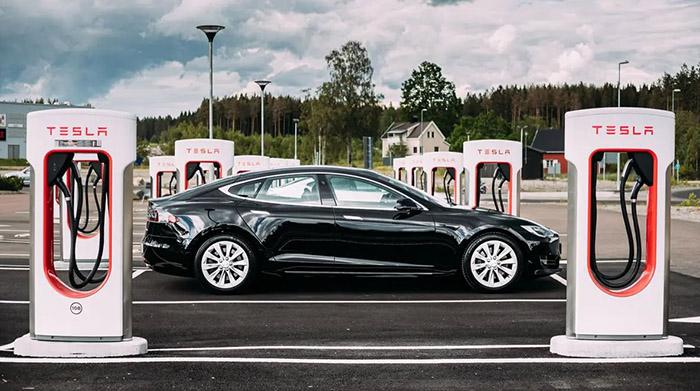 Your Tesla can be charged in one of three ways. These things:

There are two kinds of equipment for charging at home:

Has power levels that can be changed, so it can be installed on a wide range of circuit breakers.

It can be mounted on a wall or a post both indoors and outdoors.

Has a warranty of two years.

Can share power with up to three other Wall Connectors. This is great for businesses or people who own more than one Tesla.

When a Wall Connector or Mobile Connector (which will be talked about in the next subtopic) is plugged into the charge port, it sends alternating current (AC) to your car. The direct current from this electricity is then stored in batteries (DC). The device in your car that changes AC power into DC power is the onboard charger.

Now, different Tesla models can charge in different ways when they’re on the move. So, if you want the fastest charging speeds, you should connect your Wall Connector to the circuit breaker that Tesla recommends for your car. Use this table that Tesla gave you as a guide.

(to share power between two or more Tesla vehicles)

Depending on the current electrical system, a Wall Connector can also be installed with a circuit breaker that can handle less current. But when as many as four Tesla Wall Connectors are linked together, it’s best to use higher amperage installations. By doing this, the most power can be shared between the cars when they are charging.

When you buy a new Tesla, it comes with the Mobile Connector, which is a small bundle that lets you charge your car at medium to low speeds from different outlets. The package deal comes with:

If your home has a different type of plug, you can buy the right adapter from the Tesla online store. In the table below, you can see how much each type of adapter costs.

range in miles per hour of charging 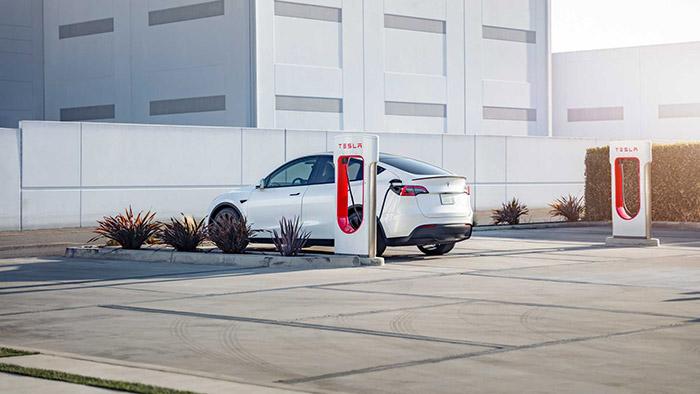 A Tesla can charge anywhere, which means you can plug it into any public charging station. All public Level 2 240 V charging stations have a standard connector (SAE J1772) that fits all electric cars except the Tesla. This is where the SAE J1772 adapter that Tesla gives you comes in.

If you want to charge your Tesla at a public charging station that isn’t made by Tesla, you will first need to connect the adapter to the charging connector and then plug it in. Tesla made a short YouTube video to show Tesla owners how to use public chargers that are not part of its charging network. Here’s the link to the video: https://www.youtube.com/watch?v=lh1FSFK OfY

Note: Tesla does not control the prices at third-party charging stations or how they work.

EV charging costs aren’t as clear as gas station prices, which are shown on big signs. But the way you pay will usually depend on the charging station.

Some charging stations for electric cars will charge by the hour, so give the car as much power as it can use in that time.

Some companies will charge by the kilowatt-hour.

There are some places that charge a fee for each charging session.

You might also find a charging station that costs a monthly or yearly fee to use.

And there are still those free charging stations!

Most chargers in public places are Level 2 chargers. Places like offices, grocery stores, and parking garages have them. Level 2 chargers are much faster than Level 1 chargers (120 V), adding about 15 to 25 miles of range per hour. Most electric cars with long ranges can be fully charged with these chargers in eight hours.

Tesla also has Destination Charging networks as an option. With these networks, you can charge your car at tens of thousands of convenient places, like shopping centres, parking garages, hotels, restaurants, and other places that serve people. You can use your touchscreen and navigation or the Tesla Find Us map to find these charging stations.

In addition to charging at home and in public, there are Tesla Superchargers, which charge very quickly. At a Supercharger station, it takes about 30 minutes to charge your car to 80%. They are placed on busy roads and in areas with lots of people. They are also close to things that people want, like restaurants, coffee shops, travel plazas, and WiFi hotspots.

Most of the time, you pay per kilowatt-hour (kWh), which is the fairest and easiest way to do it. But if this isn’t possible, Tesla will charge per minute for the service.

Tier 1 is also used when your Tesla shares a Supercharger with another car.

Prices for superchargers depend on where they are, how they are set up, how old and how well the batteries are, how you drive and how you use them, and the weather and environment. In the United States, the average price is $ 0.28 per kWh, $ 0.26 per minute above 60 kW, or $ 0.13 per minute at or below 60 kW.

Some Model S and Model X cars that were ordered before November 2, 2018, get 400 kWh (about 1,000 miles) of Supercharger credits each year. Once they are gone, the standard Supercharger fees will be charged.

You can use your car’s touchscreen, navigation, or the Tesla Find Us map to find a Supercharger station. Once you get there, park and connect your car to the Supercharger post using the plug. The charge port LED on the car should flash green to show that charging has started. At a Tesla charging station, you don’t need to connect the adapter to the connector before plugging in.

How long does it take to recharge a Tesla?

If you liked this article, be sure to read: Smart Car Weight and What Does “Clean Title”