There are amps and volts on every car battery. These test certain aspects of how well their electricity works.

Most of the time, we rate batteries by how many amp-hours they have, which is a very important factor when buying car batteries.

But it’s a lot harder to shop for a new battery if you don’t know how many amps a car battery should have in the first place.

Most batteries hold about 48 amp-hours of energy. As for amps, they are usually measured by how fast they start up when they are cold. The cold-cranking amps of a battery can vary a lot. Some have as many as 500 CCAs. On the other hand, some batteries might only have 100 CCAs.

In general, more cold-cranking amps are found in newer batteries. That’s because they power a lot more electronics than they used to. Most modern cars have a lot more extras than older cars did.

Most of the time, you can look at the label on top of the battery to see how many it has. There are several things written on this label.

One of them would be its amps that work even when the power is off.

They figure this out by discharging the battery at a steady rate and temperature.

And they do this when it’s 80 degrees F outside.

Also, a battery’s reserve capacity is usually given in terms of minutes. So, if your battery has 120 RC, it can discharge 25 amps for 120 minutes.

It won’t be able to start the car again after that.

On the other hand, most batteries have 12 volts. That is how much electricity it can do.

You don’t have to find a specific battery for your car because of this.

As long as you find one that fits your car, it should work.

Of course, some cars are made to use batteries with more power than others. Check your owner’s manual to see if you need a special kind of battery.

It will tell you what kind of battery is best for your vehicle.

What Are Amps In A Car Battery? 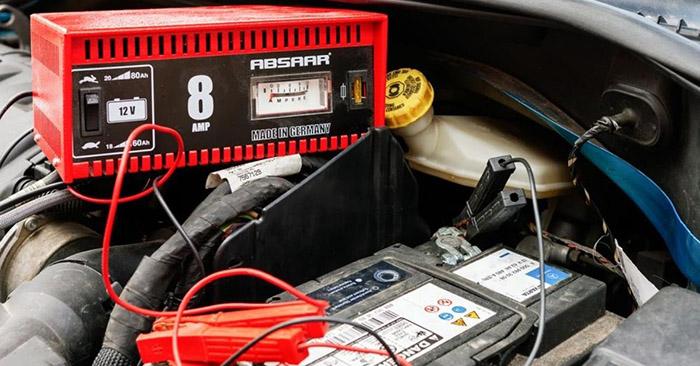 Amps measure how fast electrons move through a battery.

Amp-hours show how much power your battery can hold. It tells how long a certain number of amps can be drawn from a battery.

This is easier to understand if you give an example.

Most of the time, deep cycle batteries will have amp-hours written on them. But they can be used to talk about all batteries.

The longer a battery can go without being charged, the more amp-hours it has.

We could also compare this to something else to explain it.

Let’s think about a river instead of electrons.

How fast is the river’s water moving? The more water is moving through at any given time, the faster it is moving. This is like how the amps of a battery work.

Volts are a little harder to explain, but it’s still pretty easy to understand. It is a way to measure how different the electrical potentials are.

This is like putting a pump in a river to make the water move faster. The more water will go through the pump, the stronger it is. That’s like the voltage of a battery.

Now, each battery will have its own set of traits. These can be seen in the different voltages and currents.

A car battery will usually have 48 amp-hours.

But that’s not the same as how many amps it has.

How Many Amps Does It Take to Charge a Car Battery 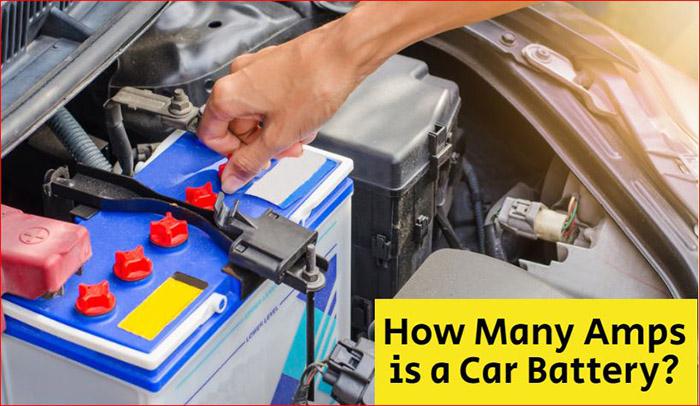 If you’ve ever tried to charge a bad battery, you know how hard it can be. Batteries lose their ability to hold a charge over time. This is because they only have so many cycle lives.

It shouldn’t be possible to drain a battery all the way. But if your alternator stops working, you might not have many options.

Then you have to charge it up again before you can start the car again.

A battery charger gives your battery a certain amount of electricity at a certain rate. The amps are also used to measure this.

Most battery chargers give off electricity at a rate of 2 amps. We can figure out how long it will take to charge by dividing that number by the number of amp-hours in your battery.

For example, let’s say you have a 50 amp-hour battery. In that case, it would take 25 hours for 2 amps to fully charge the battery.

Most of the time, it is better for the battery’s overall performance to charge it slowly.

Other chargers may give out more amps, but they could hurt the battery.

If you charge a battery too much, it can hurt its cells. In the long run, it won’t be able to hold any charge at all.

It’s also not good to charge the battery too little. It won’t be able to start the car if it doesn’t have enough amps.

If you don’t have much time, you could use a battery starter. These give out a lot more amps than a regular charger.

Some can give out up to 75 amps. That means it would take less than an hour to fully charge a 50 amp-hour battery.

But it’s not good for the battery to be charged that quickly.

If you have time, use a low-amperage charger every time. These help your battery last longer.

So, you won’t have to buy a new one as soon.

Most people have some questions about how well their battery works. So, we’ve put together some answers to the most frequently asked questions.

How Many Amps Are in a 12-volt Car Battery?

We can’t be sure how many amps a battery has just because it has 12 volts. Most batteries with 12 volts have between 550 and 1000 amps in total.

A battery charger is probably either 2 amps or 10 amps. Most batteries have hundreds or even thousands of amps. But most chargers only give out 2 or 10 amps of electricity.

Each battery has its own set of instructions for how it should work. Check the label on your battery to see how many cold-cranking amps it has when it is fully charged.

How Many Amps Do You Need to Start a Dead Battery?

The more powerful your car is, the more amps it will need. A small car might only need 150 amps to start from cold, but a truck might need 500.

How to Measure Your Battery’s Amperage and Voltage

Have you ever been curious about whether or not your battery was charged? If so, you might be interested in how to measure it.

The easiest way to do this is to use a digital voltmeter. You can get one of them at the auto parts store near you.

Make sure your voltmeter is set to DCA. After that, you should see a score between 10 and 14.

That’s how much voltage it has.

About 10 volts would still be in a battery that was completely dead. Most of the time, you should have 12 or more on your battery.

If it has less than that, your car may not be able to start.