The wobbling of your car’s wheels is entirely normal, and you don’t need to worry about it. Because of poor axle performance, your vehicle’s wheels may appear to sway more than usual. If you’ve ever seen the phrase “axle” used in reference to an automobile, but have no idea what it means, you’re not alone. You’re not the only one. There are several different types of axles that may be found in an automobile, and we’ll go over each one in detail in the following sections.

What Is An Axle?

Let’s start with a definition of what an axle is and what it does. An axle is simply a rod that joins two wheels together. Nevertheless, the axle is more more than just a means of connecting the wheels of a vehicle. There is a central shaft that moves with the wheels as they move. The axle is one of the most important pieces of any vehicle because it controls the power that moves the wheels. Glued to the wheels, an axle is able to rotate with the vehicle. Many vehicles have axles that allow the wheels to rotate around them.

One of the most important parts of an automobile, the axle has to support the vehicle’s weight as well as the weight of its various components and its occupants. The term ‘bearing,’ used in conjunction with the axle, may also be familiar to you. Axles are supported by bearings, which are found in the hubs of the wheels. When you accelerate or brake, the support they give is critical in keeping your car’s weight under control. With the help of your car’s engine, the power is transferred to your wheels through the use of axles. Count the number of axles you have in your vehicle.

How Many Axles Would You Find In Your Car?

In a nutshell, one axle is needed for each pair of tires. To put it another way, an automobile with four wheels almost always has two axles. Since most vehicles only have two axles, we won’t go into great depth on vehicles with three or more axles.

The frontal wheels of your car are supported by this axle, which is located directly in front of them. You need to make sure that your vehicle’s steering system is working properly by inspecting this axle. In addition to this, it serves a crucial role in cushioning the impact of driving over bumpy or uneven roads. It’s for this reason that front axles are often constructed of carbon or nickel steel. Small and large vehicles alike can be supported by these metals, which are excellent at absorbing shocks. In all, the front axle consists of four parts:

The swivel pin is pivotal in its design.

The ray of light

We’ll go over these two types of front axles in more detail in the paragraphs that follow:

Dead Axles are also known as Lazy Axles, and they get their names from the fact that they do not have a connection with the engine. It can freely rotate because it isn’t attached to the engine. Its primary job is to ensure that your vehicle’s weight is distributed evenly over the rest of the structure. A drivetrain does not include a dead axle. Even when traversing tough terrain, their axles remain firmly in place. They are usually protected from water, dirt, and debris by their protective housings. To put it another way, it’s the rear axle of a front-wheel drive vehicle that’s most usually seen.

The driving axle is attached to the driveshaft, unlike the dead axle. This sort of axle extends from the differential all the way to your tires. Small encasements commonly surround drive axles to assist shield them from the elements. Using this housing improves the performance of the axle and extends its life span. Between the two half axles that make up the drive axle is a split axle. Universal and differential joints connect the two halves of the axle to the split axle. It is possible to freely and vertically spin the wheels since each half axle is connected to each wheel via a CV joint.

Both the front and back wheels of your cars will have driving axles. It is one of the most often used drive axles known as the Constant Velocity Axle, or CV axle. The transaxle can send power to the wheels via these powerful axles.

In most cases, the rear axle is made up of two pieces. Half shafts are the common name given to these two halves. There is a part of the differential that connects them. There are a variety of rear axles available in today’s vehicles. There are a variety of axles to choose from depending on the amount of support a vehicle need and how it needs to be attached to the chassis. The primary function of the rear axle is to transfer power from the engine to the vehicle’s wheels. The majority of rear axles are known as “live axles” since they are able to spin with the wheels of your vehicle. Rear axles can be broadly divided into three sorts, which we’ll go over in more detail in the sections that follow.

A wheel with a fully floating axle is one that stays in place at all times. The two robust bearings that hold it in place are the primary reason for its stability. The sole purpose of a full-floating axle is to transmit driving torque. This type of axle is most commonly found in large vehicles like commercial trucks and school buses. Full-floating axles are necessary for four-wheel-drive cars and towing vehicles. Due to their frequent use in harsh environments, heavy-duty axles like these are built to withstand the rigors of daily use. Depending on the vehicle, this axle may be able to hold the entire weight of the vehicle. 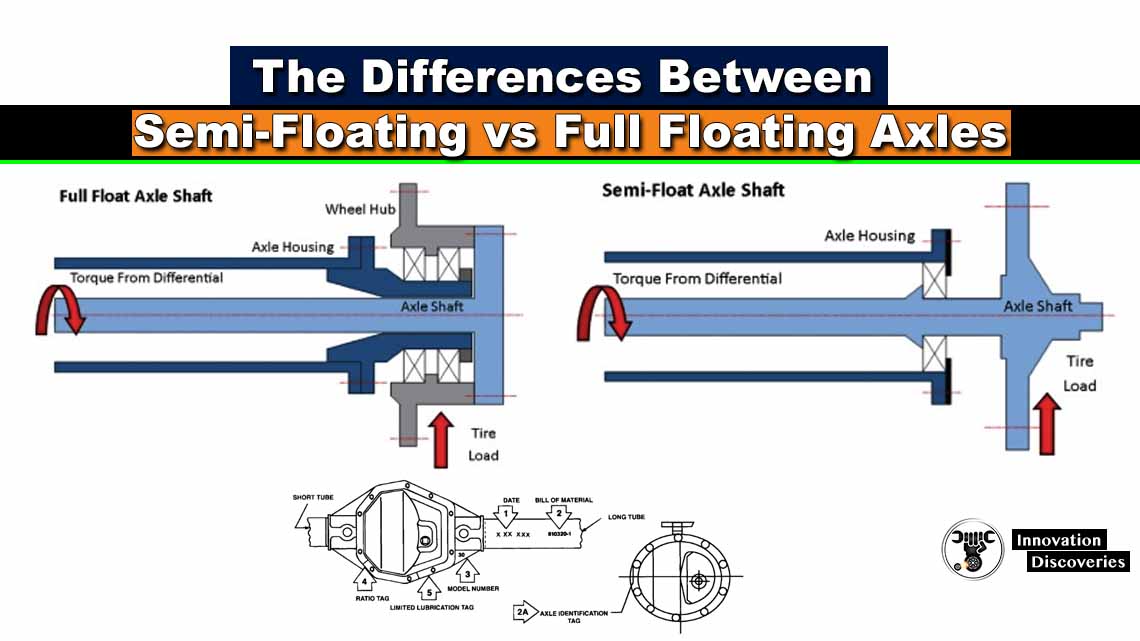 In terms of weight and torque transfer, a semi-floating axle is preferable to a full-floating axle. An additional benefit of this axle is that it is substantially lighter than an all floating axle. These axles can be found in automobiles, SUVs, and trucks. These axles are often seen in smaller, lighter-duty pick-up trucks. In order to connect the wheel flanges to your vehicle, you’ll need an axle like this one. On the outside of the axle shaft, there is a flange bearing that helps keep the axle in place. Two bearings are used in semi-floating axles. The axle shaft is supported by one bearing. In the axle, the other bearing is located. Because this axle is often larger than other axles, it may have several drawbacks. Mainly due to its two bearings, this is the case. Although it is larger than other types of axles, the major disadvantage is that it provides the same amount of torque.

This axle is more complicated, but it also performs better than the other two. Maintaining proper wheel alignment is the primary function of a three-quarter floating axle. In addition to its primary role, it’s also responsible for handling your vehicle’s side thrust. This type of axle can also be used to generate torque.

Other Types Of Axle

The stub axle is a new form of axle that is becoming more common in today’s automobiles after we covered the basics of the two primary axle types above. The front wheels of a vehicle are normally supported by this sort of axle. Stub axles are attached to the front axle using a kingpin component. The following are the most common types of axles on the market today:

In order to secure the Elliot axle to your car’s front axle, it requires a yoke, a cotter, and a kingpin.

In Lamoine’s words, this axle features a spindle that looks like a “L.” In contrast to other varieties of Stub Axle, this one has a yoke-like hinge that separates it from the rest. It is a Lamoine stub axle with the exact opposite layout, hence it is a Reverse Lamoine. Similar to a Reversed Lamoine, a Reverse Elliot has an inverted Elliot stub axle configuration. 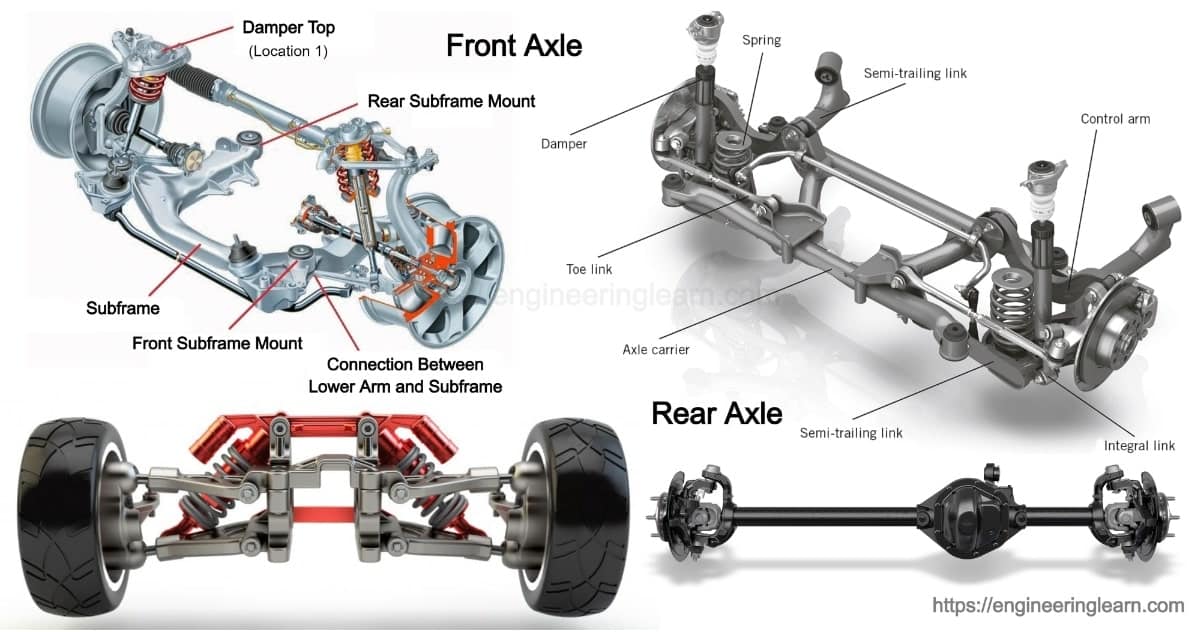 As we’ve covered the amount and types of axles your vehicle can have, you should have a decent idea of what each one accomplishes. Maintaining your vehicle is easier if you know how each type of axle works. Maintaining the health of your car’s axles is critical, so take the time to educate yourself on the subject. If you know what each component does, you’ll be able to repair or replace it more easily. All of the axles we’ve spoken about here play a crucial role in the stability and maneuverability of your vehicle.