If you don’t know where to find the best deals, buying new tyres can cost a lot of money.

So, Costco is one of my favourite places to buy them when we’re out shopping.

Costco has better prices on tyres than many of its competitors, but they aren’t always the cheapest option on the market. But their 5-year tyre warranty and free service for life are great features that make them a great choice to think about.

Costco charges between $150 and $250 per tire, on average. They have also given coupons to a lot of their customers, which has brought the price down even more.

Check their website to see if there is a coupon for your tires.

So, how much would it cost you at Costco to get new tyres for your car? As we said, the price of each car will be different.

To find out how much the tyres will cost, you have to figure out which ones it needs.

We ran some numbers to find out how much it would cost to replace the tyres on a Honda Accord. It usually has 225/50R17 tyres on it.

These are pretty popular all over the world, and you can find them on a lot of cars.

When we looked at Costco’s website, we saw a number of options that would work for an Accord.

The least expensive ones we saw cost $142 per tire. That doesn’t count any discounts we could have gotten.

Obviously, the cheaper ones don’t usually come from the most well-known brands. We also looked at how much a Michelin Primacy 4 tyre costs.

Without any discounts, it would cost $238 at Costco to buy one.

If you wanted to replace all four tyres on an Accord, you’d have to pay $955. Even if you chose the cheaper ones, you would still spend more than $500.

Still, that’s less than what it would usually cost at another store.

If you buy a set that comes with coupons, you can save even more money. When you shop online, it’s easy to use a coupon. Just type the code in at checkout to get a discount.

But you have to pay for more than just the tires. Costco also charges $15 per tyre to put them on for you.

Plus, they add on a $3 service fee for each tire.

Is There an Advantage to Buying Tires at Costco?

Their 5-year warranty covers anything you’ve bought from them.

This protects you if a road hazard causes one of your tyres to go flat. They’ll give you store credit to use on another item, saving you money.

If your tyre goes flat, you can even ask them to fix it for free. If you bought your tyres from one of their stores, you can count on their warranty.

You might even see a difference in how much gas you use.

Whoever buys tyres from them is also eligible for service for life. If you fill up your tyres at their store, it doesn’t cost anything.

They will even turn them while you are there for free.

As part of their lifetime service guarantee, they will also balance your tires. Every time you go there, they’ll also replace the valve stems on your tires.

Are Tires Cheaper at Costco or Walmart? 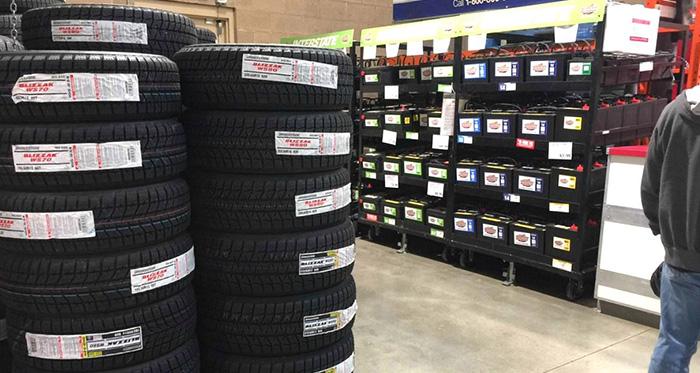 Costco is obviously cheaper than a lot of other places to shop. But are tyres at Costco less expensive than at Walmart?

We looked at how much a tyre costs on average at Walmart and at Costco.

If there isn’t a discount, it seems like Walmart has lower prices. But when you use coupons, Costco is cheaper.

At Walmart, it would have cost more than $1,000 to buy four Michelin tires. If you buy the same tyres at Costco and use their coupon, they only cost $850.

Michelin Primacy 4 tyres can be bought at Walmart for $262 each. Without coupons, Costco sells them for $238.

If you buy something and include a coupon, it makes an even bigger difference.

Is It Better to Get Tires at Costco or Discount Tire?

If you haven’t heard of Discount Tire before, you should hear this. They are one of the best tyre sellers in the country, and their prices are low.

We went to Discount Tire to see how much it would cost to buy 4 tires. And it looks like their prices are the lowest on the market. We also like them because they carry so many different brands.

Costco has a pretty big selection, but Discount Tire is way better. They have the best selection of tyres we’ve seen when looking for tires.

They sell Michelin Sport tyres for only $159 each.

That is one of the least expensive tyres we’ve found at any store. If you had to replace all 4, you might only have to pay $600.

The biggest problem is that they don’t come with warranties.

Any tyre you buy from Costco comes with a 5-year warranty. To be covered by them, you don’t have to pay anything.

Discount Tire charges extra if you want a warranty.

That could be why they can set their prices so low to begin with. Even if you pay for it, it won’t give you the same coverage as Costco.

At Discount Tire, they’ve only had a 3-year warranty.

So, you may want to think about whether or not you need coverage. If that’s the case, Costco is probably a better choice.

Tires from Discount Tire come with a free standard warranty. This is the same one you’d get from the company that makes the tires.

It’s also not as thorough as Costco’s warranty.

You should also think about how they handle trade-ins. You can’t trade in your old tyres at Costco. But if you’re getting new tires, Discount Tire will buy your old ones.

They will give you credit that you can use to buy new ones, bringing down your total.

The last big difference between Costco and Discount Tire is the kinds of things they sell.

Even if the brands are inexpensive, Costco only sells a few of them. Discount Tire has 3 times as many options as Costco and a lot more variety.