Whether you’re driving to work, taking your kids to school, or going on a date, the last thing you want is to step on your car’s accelerator and hear the engine barely whimper.

Even though having less engine power might make you feel scared, it’s important not to. Here’s what you need to know, since it could mean a big repair is coming up or not.

What Does Reduced Engine Power Mean?

When your car’s engine has less power, the “Check Engine” and “Engine Power Reduced” lights will light up on your dashboard.

The warning light that says “engine power reduced” or “engine power is reduced” means that the vehicle’s electronic control unit (ECU) has found a problem and gone into a fail-safe mode to protect the system from damage by reducing its performance.

Even though this sounds bad, it’s good that your car is telling you this because it means the car is being protected until a mechanic can check it out.

If you’re lucky, you may only have to change your spark plugs, spark plug wires, or do some other simple maintenance work to fix the problem. Sadly, it could also mean that your engine has a serious problem that will cost a lot to fix.

No matter what the problem is, if you keep driving with these warning lights on, it’s almost certain that you’ll have to pay hundreds or thousands of dollars to fix your engine. 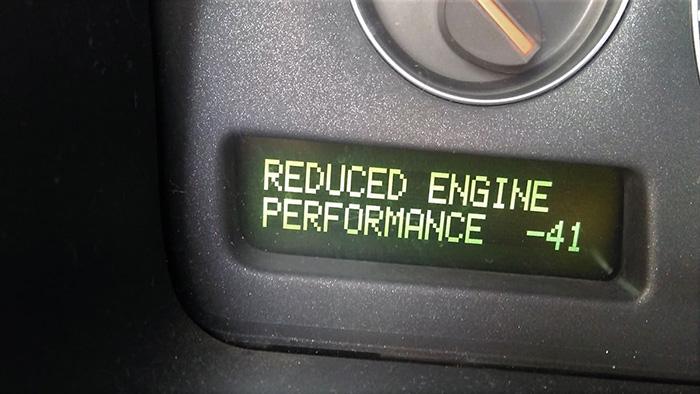 When your car’s engine power goes down, it could be because of a number of things.

One of the most common is a problem with your car’s TAC system, which stands for Throttle Actuator Control. This is common in the highly computerised cars of today, and it means there could be a problem with the sensors that tell the car when you want to speed up.

If one or both of these sensors are broken, the ECU can’t use the actuator motor to move the throttle, which means less air can flow into the engine.

In some cases, there may be a problem with the assembly of the accelerator pedal, so this needs to be checked out as soon as possible.

If you’re lucky, your car’s electrical system might just have a loose clamp or wire. Even though you or your mechanic may have to do some investigating, this is usually not a big repair.

Other things that could be wrong are a broken oxygen sensor or a problem with how your battery connects, neither of which is very serious. Low engine power could also be caused by problems with your transmission, like a clutch that slips or not enough transmission fluid.

When your catalytic converter is clogged and can’t turn carbon monoxide into carbon dioxide, it can cause problems with the flow of air in the exhaust system, which eventually make their way to your engine.

As for something that can be a big problem, this would be a broken Electronic Control Unit. When this happens, it’s bad news for you and your car because getting this part replaced is hard and expensive.

In some situations, this repair can be so hard and expensive that it might be better to buy a new car.

Now that you know all the possible reasons why your car’s engine power is lower, you’re probably wondering if you can still drive it with less engine power. So you can stop worrying, the answer is yes.

But before you decide that you don’t need to get this problem checked out right away, it’s important to think about what it will be like to drive with less engine power.

First of all, your gas mileage will go down a lot, which means you’ll spend a lot more on gas than you would under normal conditions. Also, your acceleration will be very slow and unpredictable, which could make driving at higher speeds hard or even dangerous.

Lastly, if you drive a car that needs you to change gears, this will sometimes feel like a tug-of-war. Also, depending on the type of ECU in your car, it may turn off your radio or other “non-essential” parts.

Instead of putting yourself and your car through this extra stress, it’s best to go to a mechanic, find out what’s wrong, and fix it as soon as possible.

How to Fix Reduced Engine Power 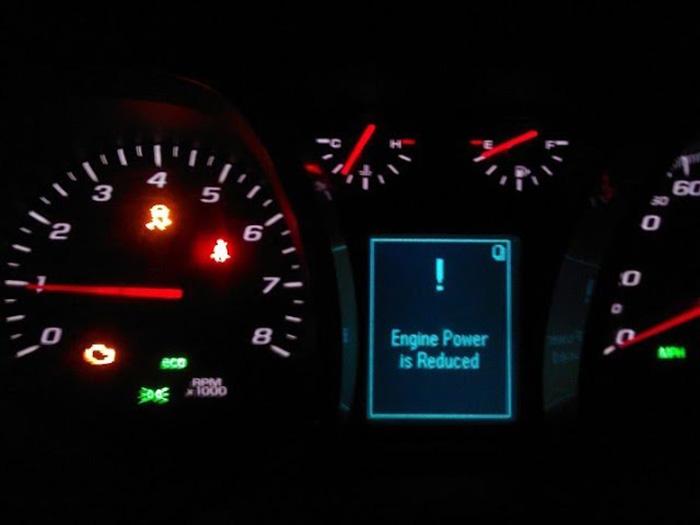 If you feel comfortable, you might be able to fix your car’s less-powerful engine while it’s parked in your driveway or garage.

When the “Reduced Engine Power” light comes on, something is wrong with a part or system of the car. But it could also mean that the ECU is being set off by a circuit, connector, or harness.

First, make sure that your battery is properly connected. If it’s not, it can make the engine less powerful. Also, a bad ground connection to your engine could be to blame, since a drop in voltage and currents will affect your engine.

A digital multimeter is what you’ll need to check the engine grounds.

But first, you need to turn off the ignition switch on your car, unplug the connector and look for dirt or corrosion on it, pull on the wires to see if any are loose, and check both connections on the wires to make sure they are good.

If you can’t fix your car on your own, you should take it to a mechanic you know and trust. When you do, the mechanic can use cutting-edge digital scanning equipment to figure out what’s wrong, explain it to you, and give you an estimate of how much it will cost to fix.

If you’re trying to figure out how to turn off your car’s “Reduced Engine Power” light, don’t bother looking for a button nearby or a magic wand in your glove box, because neither exists.

To get rid of this message from your dashboard, you or your mechanic will need to find the cause of the problem and fix it.

Until then, you will see this message and the “Check Engine” message every time you start your car.

How Much Does it Cost to Fix Engine Power Reduced?

Like most maintenance and repair tasks that come up with your car from time to time, fixing this problem could cost you almost nothing or thousands of dollars, which might make you want to buy a new car instead.

For example, if the problem is that your battery isn’t connected right or that a wire has come loose, you won’t have to pay a dime to fix it.

But if your problem is with the ECU itself, a bad catalytic converter, or a problem with your vehicle’s transmission or throttle assembly, these repairs will be more expensive and need to be done by an experienced mechanic.

You can expect to pay around $500 for parts and labour if you need a new throttle body, position sensor, or other similar parts.

When it comes to replacing your catalytic converter or ECU, these repairs can often cost $2,500 or more, which may make you wonder if it will be worth it.

What if My Vehicle Doesn’t Have a “Reduced Engine Power” Warning Light?

Even if your car’s dashboard doesn’t have a “Reduced Engine Power” light, it will almost certainly have a “Check Engine” light to let you know that something is wrong with the engine.

If you think your engine is running with less power than it should, there are some easy things you can check to see if they are the cause.

First, check to see if your car’s air filter is clogged. Also, check your tyre pressure. If it is too low, your car will use more gas and drive differently.

Lastly, check out your fuel pump or have your mechanic do it. If your car is running slowly, won’t start at all, or you know something is wrong but there are no warning lights on the dashboard, the fuel pump may be the problem.

If that’s the case, replacing it will cost several hundred dollars.

If your car’s engine power is very low, the transmission system might go into “limp-in” mode. If this happens, your car will do exactly what it sounds like: it will limp back to your house or the nearest mechanic.

Sometimes, you might only be able to use the second gear, Park, Reverse, and Neutral.

When these things happen, it’s usually a sign that there’s a serious problem with your car that needs to be found and fixed as soon as possible so that more damage doesn’t happen.

Can the Cold Cause Reduced Engine Power?

If you live in a part of the country where it gets very cold a lot, the cold temperatures could be the cause of your engine power problems. Some cars, especially Chevrolets like the Malibu, have problems with their throttle body systems when it’s cold outside.

When the oil level in your car’s engine is very low, it can sometimes cause the engine to have less power. The reason this happens is that the engines in today’s high-tech cars have variable valve timing systems, which means they depend a lot on the right oil pressure to work at their best.

The End of the Story on Less Engine Power

You can drive with less engine power, but you probably know by now that this isn’t the best thing to do.

Even though the problem might just be bad spark plugs or a loose wire, keep in mind that it could also be a big problem with the ECU or another system.

Have a mechanic check out your car to find out and get you back on the road in the safest way possible.