How Much Is A Tint Ticket In California Updated 02/2023

There is a good chance you’ve thought about window tinting if you reside in California and drive a car. Having tinted windows in your car might be a useful and convenient extra if you live on the West Coast.

If you’ve never had your windows tinted before, you may not be aware of all of the regulations and guidelines that the state of California has put in place.

In this article, I’ll walk you through the ins and outs of California’s window tint regulations so you know exactly what you can and cannot do with your vehicle’s windows.

Are You Allowed To Have A Tinted Windshield And Windows In California? 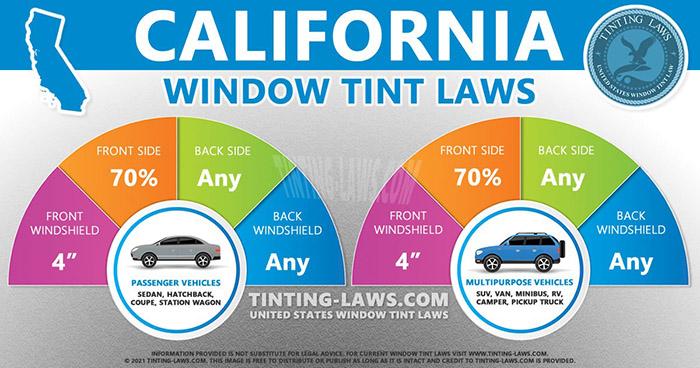 Yes, but there are rigorous guidelines for tinting your windshield and the windows in the front of your vehicle. Only a little strip of non-reflective tint can be installed at the top of your windshield to keep out the sun (although this strip cannot be more than 4 inches wide).

You must have a VLT of 70% on your front windows. When you hear the term “visible light transmission,” you’re referring to how much light can pass through your window tint.

However, there are no limitations on how dark you can tint your rear side windows and window.

What Is The Darkest Tint You Can Legally Get In CA?

This depends on which windows you want to tint. A VLT as low as 5 percent is fine if that’s what you’re looking for when tinting the back side windows and the back window of your car; there are no restrictions on this.

Keep this window tinting rule in mind if you own an older car that only has a side mirror on the driver’s side.

The darker the tint, the more difficult it is to see through the windshield and the front side windows.

No, I’m not recommending that you tint your windshield, because doing so would be against the law.

However, a severely tinted windshield can also be a safety problem; tinting your windows makes it more difficult to see out of them at night, and if the VLT of your windshield is below 20%, it can effectively leave you driving in the dark at evening.

Can You Get Pulled Over For Tinted Windows In California?

If your windows are excessively dark, you’re going to get pulled over. The fact that you have illegally tinted windows does not give the police the right to examine your vehicle without a warrant is crucial to understand.

If you are pulled over and the officer asks if you want to be searched, you have the right to say no unless there is a good reason for the search or you have contraband visible in your vehicle.

How Much Is A Tint Ticket In CA?

If you’re pulled over, a lot will rely on the type of ticket you get. The normal fine for unlawfully tinted windows in California is $25, so you should expect to get away with a relatively light fee if this is your first time being pulled over for any offense.

You may be charged with an infraction if you’ve been pulled over before for similar reasons, which is more serious and carries a considerably higher punishment. You can expect to pay a fine of $197 if you are charged with an offence.

A “fix-it” ticket, on the other hand, will only need you to remove the tint. Affidavits or an officer’s signature will be required to prove that the tint has been removed.

If you’ve already received a ticket for improperly tinted windows and haven’t removed the tint, you’re more likely to obtain a standard ticket.

As a result of this, you may have to appear before a judge and explain why you didn’t remove your window tint when you were originally instructed to do so.

To avoid the hassle of dealing with the legal consequences of unlawfully tinting your windows, make sure your windows are tinted within legal limits from the beginning.

What we call “passenger vehicles” refers to vehicles that don’t have third-row seats and don’t come equipped with a large cargo area.

MPVs, on the other hand, include SUVs, minivans, pickup trucks, panel vans, crossovers, and recreational vehicles. As a result, an MPV can be characterized as a vehicle that can carry more than five passengers, a vehicle that is primarily used for utilitarian reasons, or vehicles like RVs that have an integrated living space.

If you’re not sure if your car is an MPV or a passenger vehicle, look at the Federal ID label to see what it indicates. There should be a label on the driver’s side door frame stating what type of vehicle you have.

At the very top of the windshield, there may be a narrow strip of non-reflective tint.

Side windows on the front of the vehicle must be tinted to less than 70 percent Visible Light Transmission (VLT).

It’s up to you how dark you want the tint on the back side windows.

There are no limits on how dark the tint can be on the rear windows.

The top of the windscreen may have a non-reflective tinting strip no broader than four inches.

Side windows on the front of the vehicle cannot have a VLT of less than 70%.

There are no limits on how dark the tint can be on the back side windows.

There are no limits on how dark the tint can be on the rear windows.

Despite what we’ve covered so far, we still haven’t discussed the laws governing the reflectance of your window tint.

More reflective windows help reduce heat and glare inside your car, but they can also blind oncoming motorists if they are overly reflective.

All tinted windows that are more reflective than the ones that came with your car are currently banned in California.

The use of any kind of colored tint on any type of vehicle is likewise illegal. Colored window tinting was once legal in California, but current regulations prohibit the use of any tint film that modifies the color of your vehicle’s windows.

The state of California prohibits windshields from being more reflective than what they consider “normal.”

The state of California prohibits front side windows from being more reflecting than what is considered “normal” in the state.

The state of California prohibits the use of back side windows that are more reflective than the state’s “norm.”

A vehicle’s rear windows can only be as reflective as the state of California allows.

No more reflecting than what California considers “standard” is allowed for windshields.

The state of California prohibits the use of side windows that are more reflective than the state’s “norm.”

Back side windows can’t be any more reflective than what California considers “standard.”

The state of California prohibits rear windows from being more reflecting than what they consider “normal.”

How Do You Get A Medical Exemption For Window Tint In California?

It is possible to receive a medical exemption that will allow you to tint your windows more than is generally permitted.

As a result, a doctor’s or dermatologist’s signed letter saying that you need additional window tint to alleviate the symptoms of your ailment is required. This paper, together with an exemption request, must be submitted to the California Department of Motor Vehicles.

If you suffer from an illness like lupus in which exposure to UV light can induce a variety of harmful symptoms, you may be qualified for a medical exemption.

Although there are a few standards and requirements to follow when putting window tint to your vehicle in the state of California, they are not too stringent. Tint your windows as much as you like while still staying inside the bounds of the law.

I hope I was able to shed some light on the California window tint laws for you. If you want to learn more about California’s car laws, I recommend visiting the state’s Department of Motor Vehicles (DMV) website.

DSC Button BMW – What Is It and How Does It Work?
Average SUBARU Lifespan
How Old Can Tires Be And Still Be Safe
How Much Electricity Does A Tesla Use