How To Fix Cigarette Lighter In Car Updated 01/2023

Even though it is an understatement, you have to admit that a cigarette lighter is essential to your car. What would you do on long car journeys if you couldn’t charge your cell phones or tablets?

How can you fix a broken cigarette lighter plug, though?

Even a complete novice may successfully repair a car’s cigarette lighter. Here’s how to fix a broken one.

Your Fuse needs to be repaired.

Socket in Need of Repair

It’s not the end of the world if you have a malfunctioning cigarette lighter, but it can be somewhat inconvenient. Simple problems, such as a blown fuse, can be handled at home by the homeowner.

However, when it comes to electrical issues, only a mechanic can help. However, a blown fuse accounts for 90% of all problems. 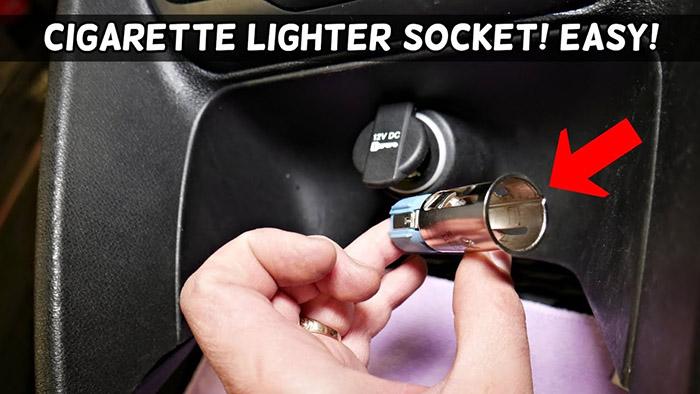 Even though it’s not a huge undertaking, it is an electrical component, and you should approach it with caution if you want to repair your cigarette lighter.

Unlike several other parts, a cigarette lighter is extremely durable. In most cases, it’s not the socket that’s causing the problem. Whatever you use to light your cigarette or charge your phone could be the source of the problem.

So, the first step is to make sure the product is free of flaws.

Check the coil face on your cigarette lighter if you’re using one. Inspect the coil to see if there are any tobacco residues or whether the coil face is cracked.

You can test the lighter’s integrity by plugging it into another vehicle and seeing if it works.

Alternatively, you might use a phone charger instead of a lighter. The problem here could be with the charger cable or the contact points.

There are three points of contact on a mobile charger: one in the middle and one on either side. In order to provide a secure fit in the socket, these screws feature a spring-loaded design.

In this case, your only alternative is to verify your charger in a different vehicle to make sure the problem isn’t with the contact points. If you have a spare charger, you could try that.

As previously stated, a blown fuse is almost always the blame for a dead cigarette lighter.

In this case, if your charger or lighter isn’t the problem, you may simply check your fuse. Your fuse may have blown for any variety of reasons.

To begin with, it’s possible that a coin got stuck in the socket.

It’s possible that you put in a gadget that drew more current than the socket could manage, if that is not the case. Changing the fuse is your sole choice in this situation.

The socket’s circuit is only rated for 10 to 15 volts, which isn’t much.

Because an inverter may not be able to keep current at the level stated above, any plugged electronics may overheat and cause a fuse to blow.

Any of the following may occur once a new fuse is installed:

This indicates a short circuit if multiple fuses go out at once.

The problem is with the inverter if the fuse blows when you plug it in.

There is no substitute for a cigarette lighter inverter that connects directly to the battery.

Clean The Inside The Socket

Despite the fact that nonmetal debris does not cause a short, it can hinder the plugs from contacting the socket.

Disconnect the accessory from the socket and remove any debris that has become lodged within.

Before removing them, you must be careful since the circuit may still be hot and short out. Metal objects should not be used to clean the sockets.

Vacuum the tough particles away with a toothpick first. If you know how to remove the socket, you can remove it and thoroughly clean it.

If the socket still doesn’t function after going through all of these processes, you should look at the socket itself for problems.

Another typical cause is a broken socket, especially in older vehicles. Corrosion can occur on metal parts over time.

Points that are bent or broken are also common, and they obstruct the flow of stream.

How can you fix a cigarette lighter socket in your car? How do you do this?

Rust can often be found at the socket’s base, where it gathers moisture.

After that, remove any rust and make any necessary repairs to the contacts.

Replace the fuse and check to see whether it’s working again.

If the problem persists, you may have to buy a new socket.

You could wonder, “How do I change my car’s cigarette lighter?”

Then I’d like to ask you to stop right now. Replace it only if you are a skilled mechanic. If you can’t do it alone, get a professional to help you.

I’ve decided to save this for last since there’s a good reason for it. Your mechanic is the best person to handle this, even though you are technically and theoretically capable of doing so.

You must first have an automotive test light or voltmeter. Use the test light to illuminate the brass ring in the socket’s center. The ground on the outside of the metal rim.

Check the flow of current by turning the key in the ignition. If your test light meets the metal rim on the outside of the fuse, it will blow the fuse.

The positive probe should be in the middle of the voltmeter, while the ground should be placed at the outer edge of the device. A measurement of 12v should indicate that the socket is working, so you can turn the ignition on.

When you hand over your automobile to a repair, they’ll inspect the wiring for any problems. This is how it’s done if you’re determined to do it yourself.

You can get to the wires by removing the dashboard trim. Ensure that all the wire is secure before removing it from the device.

There should be no gaps between the metal connections. The metal contacts of the wiring connectors can broaden if they become loose, resulting in a bad connection.

Use pliers to reshape metal connections that have expanded. Burn marks on the wires indicate that they need to be replaced. 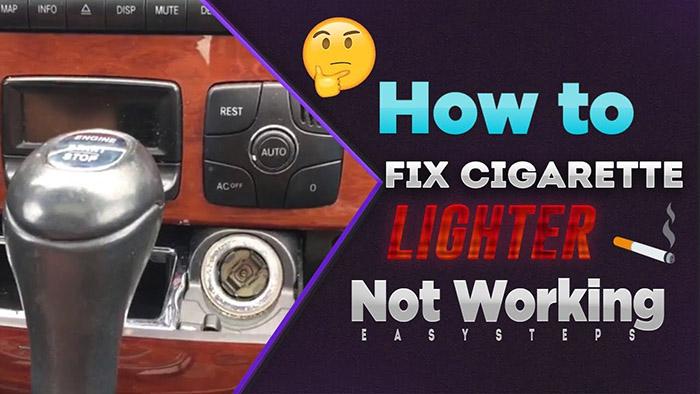 Most of the time, a blown fuse is to blame for problems with cigarette lighters. As long as you’re diligent and meticulous like every other electrical component, it’s a simple task to replace it.

If you don’t, you could end up harming other electrical components as well as the fuses.

A blown cigarette lighter fuse may be replaced by following these simple instructions on how to fix a blown fuse in your car.

Under the hood, in the trunk, or in the cabin are all possible locations for the fuse box.

A car’s fuel economy varies based on its model and manufacturer. Additionally, your car may have more than one fusebox. Please consult your owner’s guide to find the location.

Located near the windshield on either the driver’s or passenger’s side, it is a black plastic box.

On the driver’s side, next to the trunk release button, and tucked under the dashboard.

If you look inside the trunk, you’ll find it. On either the driver’s or passenger’s side, a little latch opens it.

In addition, most current cars have fuses that may be replaced in any of these compartments. The cigarette lighter fuse may not be in the same box.

The fuse box has a variety of fuses that govern various electrical functions. Make certain you’re using the correct fuse.

Only a few models will designate it as ‘Cig’ for your convenience. If you’re still unsure, you may wish to consult the included map or the owner’s manual.

Using a multimeter, check to see if the fuse has blown. A beep indicates that the fuse is functioning properly.

However, if it is charred, you may not hear a sound. A needle nose plier is all that is needed to remove the fuse once it has been confirmed.

A tweezer-like tool is standard equipment in the vast majority of current automobiles. You can remove the fuse with a needle tip plier if it is not there.

Before you remove the fuse, make sure you have a firm grasp on the plier.

Keep a firm grip on the ends of the fuse, but don’t yank too hard or you may break the fuse, making extraction more difficult.

It should resemble a sim card but be a tad larger. Thus, extreme caution must be exercised when trying to remove it.

You would have already tested it out if you had a multimeter. You can tell whether a fuse has blown by looking at it, even if you don’t have one.

A fuse’s body has a wire enclosed in a glass casing that has cracked or broken. A blown fuse will have a fractured or broken wire.

A burned wire or burn scars on the plastic housing indicate a blown fuse.

In both of these situations, the fuse is useless and must be replaced with a new one.

Replace With A New Fuse

The fuse box, as previously stated, contains fuses for a variety of other functions in the vehicle. Each fuse has a unique color and number allocated to it.

It is possible to discover an existing replacement or purchase a new one once you have located the blown fuse.

It’s not as difficult as you may think to replace the fuse, but you must be careful and make sure it’s properly aligned. It’s important to move slowly, as a rapid movement could crack the replacement.

If you follow the above instructions, you should be able to use your cigarette lighter. If it doesn’t function after that, it could be because:

After a long period of inactivity, the new fuse has deteriorated.

For the former, you can use a new fuse, but for the latter, you’ll need the assistance of a mechanic.

Watch this lady, she’s got a great way of explaining things:

How Much Does It Cost To Fix A Cigarette Lighter In A Car?

Replacement costs vary depending on the issue at hand. If the issue is with the socket alone, a replacement should only cost you $50 to $100.

This can get more expensive, though, if there is an issue with the wiring.

Why Did My Cigarette Lighter Fail?

Cigarette lighters can become bad for a variety of reasons. The following are possible causes of a blown fuse:

Accessories that don’t work together

Can The Cigarette Lighter Work If The Car Is Off?

No, it only works when the ignition is turned on unless it is directly connected to the battery.

It’s important to conserve energy and extend the life of your battery, as today’s cars have a slew of electronics.

I hate it when I go to plug in my phone and the cigarette lighter is broken. As long as the socket doesn’t deteriorate or rust out of use, it’s quite simple to fix.

Approximately 90% of the time, the problem is caused by a blown fuse. Check your accessory and then clean the socket of any debris that may have accumulated. If the problem persists, the fuse is most likely blown.

Even a novice can easily replace a blown fuse. For your convenience, I’ve included step-by-step instructions.