Putting on a seatbelt every time you get into a car takes less than ten seconds and could save your life. The National Highway Traffic and Safety Administration says that seat belts saved more than 374,196 lives between 1975 and 2017.

But what do you do when these devices that save lives don’t work right? – Don’t worry, fixing a seat belt is easier than you might think. Even if you have to replace it, it’s easy to do and won’t cost you a lot.

But what are these simple fixes, and how do you replace a broken seat belt? – Keep reading about how to fix a seat belt, and we’ll explain everything.

A Brief History of the Seat Belt

Back in 1886, when German engineer Karl Benz made the first car, it didn’t have a seat belt.

American Nash made a car with a seat belt option in 1949, and Ford did the same in 1955. However, it wasn’t until 1959, when Volvo made the three-point seatbelt, that the device became widely used.

In 1968, all new passenger cars sold in the United States had to come with seat belts. Since then, the federal government has let the states decide whether or not people have to wear seat belts.

As of today, adults in every state except New Hampshire have to wear a seat belt when they are in a car. 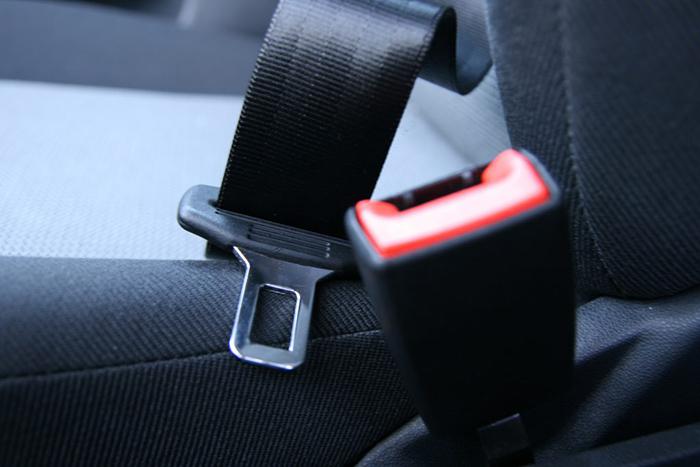 You’ll need a crash course if you want to try to replace your seat belt. So, hold on tight, because we’re going to walk you through the whole thing.

What Makes It Up

The latch of the seat belt is held in place by the buckle. They come with a button that lets you open the latch, and the buckle is what keeps the seat belt from pulling back right away once it’s on.

The metal piece that goes into the buckle is the latch. It is attached to the belt’s webbed part.

The belt itself is the web. It is usually made of polyester and is very strong, but older seat belts will have webbing that is starting to come apart.

The pillar loops are what make sure that your seat belt goes across your chest instead of over your shoulder. They are not complicated parts. Most of the time, they are just a loop of reinforced plastic that is attached above your shoulder to the frame of the car.

Seat belts have straps that go around your chest and lap and keep you in place in case of an accident. The retractor has a tensioner that grabs the seat belt if there is a sudden movement. This keeps the seat belt in place.

So, if you get into an accident, you will be held in place by the seat instead of flying through the windshield. Most of the impact will be felt in your chest and ribcage, where the strap presses against you. This is the part of your body that is the strongest and best able to handle the impact of the crash.

How to Test/Inspect Your Seat Belt

First, you need to look at your seat belt to make sure it looks good. Check to see if the webbing is coming apart or fraying. From there, quickly and sharply pull on the seat belt. It should be able to stay in place. When the tension is released, it should go back into the retractor.

Lastly, fasten the seat belt and make sure it works right. If you’ve done all of these things and everything is working as it should, your seat belt is ready to go.

Determining if You Need to Repair or Replace Your Seat Belt 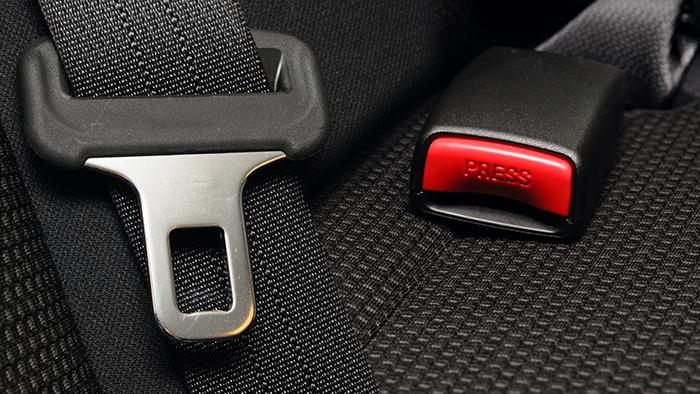 You can fix a lot of problems with seat belts, and it’s easier than you might think!

Even though there are a lot of things that could go wrong with a seat belt, here are some of the most common ones and how to fix them.

If your seat belt works fine but the warning light won’t go away, it’s because the sensor isn’t working right. It’s not a problem you should just ignore, and while you can pull the fuse to turn the light off for good, fixing it is usually easy.

When something falls into the seat belt and stops the latch from touching the sensor, this is one of the most common reasons why the seat belt light comes on.

Even though the seat belt clicks shut, that doesn’t mean it’s connected to the sensor securely. All it takes is something small like a penny to fall in there to stop everything from working right. Look inside the latch to see if you can spot the blockage.

If everything seems fine, you probably need to replace the sensor for the seat belt.

When you take your seat belt off, it should go all the way back into the reel. This helps protect your webbing and keeps your seat belt out of the way whenever you’re entering or exiting the vehicle.

If the seat belt can’t be pulled back far enough to fit snugly against the user, the retractor should be replaced. If it still fits the person well, then no.

Nothing can be as frustrating as being strapped to your seat and not being able to get out. But that’s exactly what happens if the seat belt won’t come out of the buckle.

Get WD-40 or something similar and spray it into the buckle. After letting it sit for a few minutes, poke the buckle with a small flathead screwdriver. You can open the latch and take the seat belt off with a flat-head screwdriver.

Once it’s off, spray the inside of the buckle with degreaser or WD-40 and use the screwdriver to move anything that might be in the way.

Make sure to turn the seat belt release on and off a lot to try to get the parts to move again. Lastly, put the latch and buckle together and take them apart to see if it starts to release correctly.

If the repairs don’t work, you do need to get a new buckle. Even if you don’t get into an accident, you need to be able to get out of the car quickly.

You have a problem if you try to connect the seat belt but it keeps popping back out. Something is getting in the way of how the buckle works.

It’s the same as how you fix a seat belt that won’t move. Spray WD-40 or another degreaser into the buckle and use a flat-head screwdriver to try to get the gunk out. Try over and over to hook the seat belt.

Also, press the seat belt release button early and often to try to get anything stuck in there out. Make sure to give your degreaser or WD-40 at least 10 minutes to soak into all the cracks and crevices before going in with a screwdriver.

If you can’t fix the seat belt so that it fits, you’ll have to replace the buckle.

Seat belts start to break down as they get older. The webbing is one thing you should look at. This is the belt that tightens around your chest and lap. If it starts to tear, that’s a bad sign.

Webbing that is torn or frayed can’t be fixed. You need to get a new seat belt right away. If not, if you get into an accident, it could end up ripping all the way.

Yes. This is a very dangerous situation, and the belt needs to be changed right away.

When you pull your seat belt tight, it should lock in place and stop you from making it longer. This is how it keeps you safe in the event of an accident. When you stop quickly, the seat belt will get a sharp pull that will lock it into place. If it doesn’t lock, it’s the same as not wearing a seat belt at all!

You can take the retractor apart to change the way it locks. But manufacturers don’t want you to mess with these parts, so it’s best to get a new retractor.

Yes. This is a very dangerous situation, and the retractor needs to be replaced right away.

If your seat belt is locked and you can’t pull it in or out, this is a big problem. You might think it’s fine if you can still put it on and take it off, but if you get into an accident, it won’t work the way it should.

Even though you can try to fix the retractor, they are made so that they can’t be changed. It is best to just get a new retractor.

Yes. The seat belt is not keeping you safe enough.

Step-by-Step on How to Replace Your Seat Belt

If the repairs didn’t work and you still need to replace the seat belt, the good news is that it’s not too hard to do if you have the right tools.

1. Find the Right Buckle and Retractor

Buckles, latches, and retractor mechanisms for seat belts are not all the same. This means you’ll have to either find the one that matches the one in your car or buy a whole new set. If you have the OEM seat belt, which is the one that came with the car from the factory, it’s easy to find the right replacement.

Just tell the local parts store what you drive, and they’ll help you find the right part.

2. Locate the Bolts and Remove!

This is where it gets hard. Even though it’s not hard to find and take off the bolts, you may have to take off other parts to get to them. You might have to take out the seat or the side pillar to get to all the parts of the retractor.

3. Install the New Buckle or Retractor – Make Sure to Torque!

After you take out the old parts, put in the new ones. Make sure you find the torque specs for your seat belt parts and tighten them down. You can skip this step with many parts, but not with the seat belt.

If you don’t do it right the first time, it could fall off in an accident and kill you.

One of the most important safety tools on the road is the seat belt. But if they don’t work right, your best way to stay safe becomes your biggest problem. Seat belts are usually easy to fix, and even when they can’t, they aren’t too expensive.

If you want to save a dollar, you don’t want to cut corners with your seat belts. You want to be sure that when you need them, everything will work as it should.

How To Protect Your Car From The Rain
What Is Fuel Range
Wheel Bearing Replacement Cost : Symptoms & How Much
Can You Add Brake Fluid Without Bleeding