When you get in your car, the engine is sputtering and it sounds like you won’t be able to leave your driveway. But once you get out on the open road, everything sounds good. Still, your check engine light is on. So, what’s happening? Could it be a sign of a bad idle air control valve?

Here, we’ll break it all down for you and even show you how to do it yourself if you want to. Idle air control valves are one of the easiest and least expensive parts of a car to replace, whether you do it yourself or take it to a shop.

What Is an Idle Air Control Valve?

Idle air control valves, also known as IAC valves, do exactly what their name says they do. They decide how much air your engine gets when it’s just sitting there.

You might think that since your engine always idles around the same RPM, the inputs are always the same, but this couldn’t be further from the truth. How well your engine runs depends on the temperature, air pressure, and amount of oxygen in the air.

Also, the amount of work your engine has to do to keep the RPM steady changes a lot depending on how full it is.

As all of these things change, your engine has to adjust to keep a steady idle. The idle air control valve is a key part of your engine that helps it do this. It controls the intake based on how much power your engine has and keeps everything running smoothly while you idle.

How Does an Idle Air Control Valve Work? 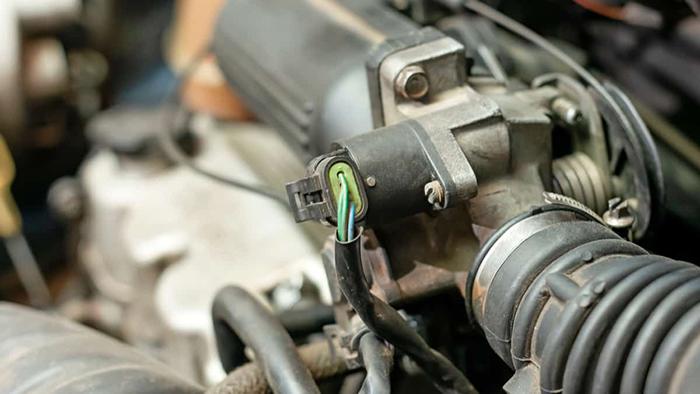 If you don’t know how a system is supposed to work when everything is going well, you won’t be able to tell when something isn’t working right or figure out how to fix it.

The idle control valve is a sensor that works with other sensors in your engine to keep the engine running smoothly. The engine’s sensors send information to the Electronic Control Unit (ECU) of the vehicle. The ECU uses this information to figure out how much air the engine needs to stay within a certain range.

The idle control valve tells the ECU how much air the engine is currently getting, which the ECU uses to decide if it needs to open or close the throttle body.

What are the bad Idle Air Control Valve Symptoms?

Even though an idle air control valve can show up in a lot of different ways, we’ve listed the three most common ones below.

If the idle air control valve is broken, the check engine light will come on, unless the diagnostic system is broken as well.

If your car has a “Check Engine” light, you need to find out what the code says. If you don’t have a code reader, you can take it to a parts store like AutoZone, and they’ll read it for free. If your idle air control valve isn’t working right, the check engine light will tell you about the circuit.

The idle air control valve controls how much air your engine gets when it’s just sitting there. It’s supposed to automatically make a smooth idle by adjusting to the conditions.

If it’s not working right, it won’t be able to do this job right, which can cause a rough idle or a speed that changes while the engine is running.

An idle air control valve can break in a lot of different ways, and how much you notice a rough or fluctuating idle will depend on how bad the problem is.

If the problem is bad enough, the engine might stop working at all while it is running. Depending on the weather or when you turn on more loads, this problem will get worse.

Your engine might be running smoothly under a certain set of circumstances, but if the idle air control valve is broken, it won’t be able to change as those circumstances change.

How to Repair a Bad Idle Air Control Valve 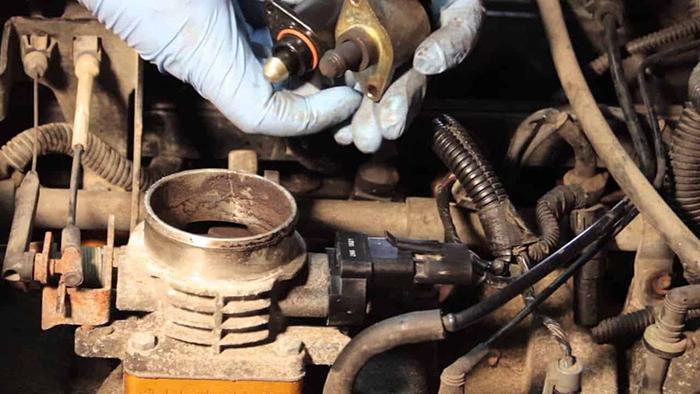 You might be tempted to immediately replace the idle air control valve, but in most cases, the problem can be fixed by giving it a quick clean.

The idle air control valve is easy to get to, and if you can fix it, the extra time it takes to clean it will be well worth it.

To clean an idle air control valve, use a good degreaser and a wire brush to scrub the ends. You won’t be able to clean the valve enough to make it look brand new, but you can usually clean it enough to get it working again.

Depending on what you drive, the cost to fix a bad idle air control valve is very different. An idle control valve costs between $50 and $100 by itself.

If you want to save a little money, the good news is that it’s usually easy to get to and replace.

You can replace your idle air control valve yourself if you want to save a little money and know a little bit about cars. It’s one of the easier repairs to make, and we’ll show you everything you need to know to do it!

When working with electrical parts, you should always take the battery out. If you don’t, a static charge can build up, which can damage more parts and cost you a lot of money.

Depending on what you drive, this step might not be necessary at all. But if you can’t get to the idle air control valve, you’ll need to take off any parts that are in the way.

On the back of the idle air control valve, there will be a plug that you need to take off. Most of the time, you can take these connectors off by hand, but sometimes they get stuck and are hard to take off. If this happens, you can usually get the connector off with a small flat-head screwdriver. Just be careful not to break anything.

When you put in the new idle air control valve, make sure the bolt holes are lined up. Put the bolts back in place and plug the electrical connector back in.

If you took off any parts to get to the idle air control valve, put them back on now.

Since you disconnected the battery when you put in the new parts, the engine control light has already been turned back on. Once you put the battery back in, you should be all set.

Can You Drive with a Bad Idle Air Control Valve?

You might think you can avoid the problem if you don’t let your car idle, but every time you stop at a red light or stop sign, your car is idle. The truth is that there is no way to avoid it.

So, you might be able to drive with a broken idle air control valve, but it’s not worth taking the chance.

There is nothing worse than being caught off guard by a check engine light. When you read the code, it feels like the worst kind of lottery. The worst results can cost you thousands of dollars, while the best can cost you about twenty dollars.

Why wait to fix something that might be free and could hurt your engine? Get your hands dirty and your car will run like it’s brand new.

What Is A Group 35 Battery?
Will Acetone Damage Car Paint
Keyless Remote Battery Low
How Long Can A Spider Live In A Car