It can be hard to tell if your car’s window tint is legal in Indiana because of this.

Because Indiana’s window tinting laws are different from those of most states, it’s important to pay extra attention to these rules to avoid getting in trouble with the law.

How is Window Tint Measured? 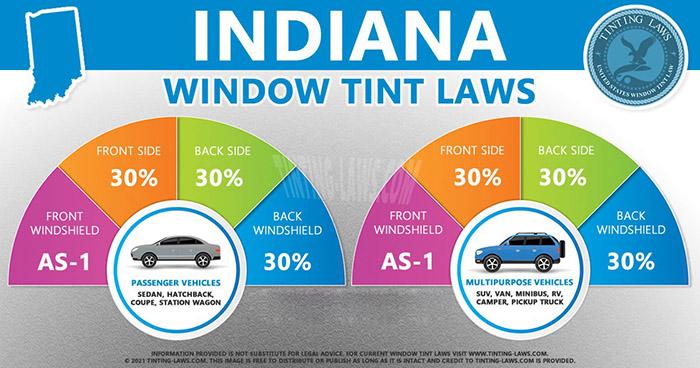 Visible Light Transmission, or VLT, is a way to measure how dark a window is.

This measures how much light can get through your tinted windows.

The tint gets darker as the VLT percent goes down.

But even though darker window tints can look great, you can only get away with so much.

So, in Indiana, how much window tint is too much?

How Much Window Tint is Allowed?

The amount of tint that is allowed varies from window to window and from vehicle to vehicle.

In Indiana, these are the rules about window tint for sedans:

Windshield: Non-reflective film is allowed along the top of the windshield, above the AS-1 line.

30 percent VLT must be on the front side windows

Back side windows must have at least 30% VLT.

Back windows must have at least 30% VLT.

In Indiana, SUVs and vans have slightly different rules about window tinting, and some windows can have a darker tint than others.

Windshields can have a tint that doesn’t reflect light above the AS-1 line.

At least 30% of light must be able to get through the tint on the front side window.

Back Side Window: Any dark tint that covers a few inches along the top of the window

Rear Window: Any dark tint along the top few inches of the window is okay.

Other states have rules about how many inches of tint can be on the back and side windows of an SUV or van, but Indiana lets the driver decide.

How Reflective Can Window Tints be? 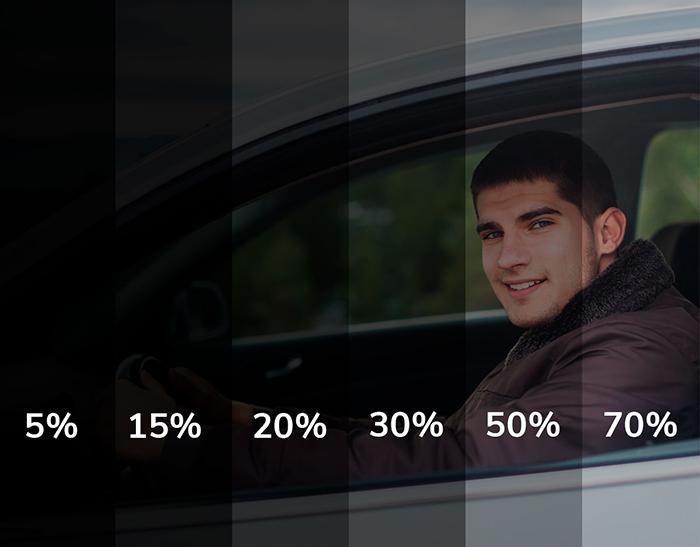 In Indiana, the front and back side windows of a car can have window tint that is no more than 25% reflective.

In Indiana, you can’t have a reflective tint on either the front or the back window.

Other Window Tint Specifications in Indiana

Even though they don’t specifically deal with window tinting, Indiana has a number of other laws that people who are thinking about getting tinted windows should know about.

Among these are rules about coloured window tints, side mirrors, and certifications from the manufacturer.

Drivers in Indiana don’t have to use side mirrors unless something blocks their view.

If there is any kind of obstruction, side mirrors must be used.

Indiana does not explicitly say that you can’t use certain colours of window tint, which is different from other states that do.

Legally, you can tint your windows any colour you want, as long as a police officer can still see who is in the car.

Any window tinting film made in Indiana must be approved by the state.

If you don’t, you could get a fine for driving with a window tint that isn’t certified.

Before you get your windows tinted, make sure to ask your dealer about certification for window tint.

But you don’t have to use a sticker or do anything else to show that your window tint is legal and up to code.

Can You Get Pulled Over for Window Tint in Indiana?

If the police in Indiana think your window tint is too dark, they can pull you over.

You could also get pulled over for window tint in Indiana if the tint makes it hard to see who is inside the car.

But if you can show that your window tint meets the 30 percent VLT requirement, you won’t have to pay a fine.

Can You Get Pulled Over for Window Tint Outside Indiana?

You could get pulled over outside of Indiana for having too much window tint.

This is even more likely because Indiana’s window tinting laws allow for a higher percentage of tint than many other states.

At 30 percent VLT, window tints in Indiana can be 5 percent darker than in most other states.

Since the police can stop any car with windows that look too dark or that they think is breaking the state’s window tinting laws, driving your tinted car out of state may make you think twice.

Still, it’s not likely that you’ll be charged.

In general, you can drive a car with tinted windows as long as you follow the laws of the state where the car is registered.

Even if you get pulled over, you should be able to go on your way as long as you have the registration with you.

As with all rules, there are exceptions to Indiana’s window tinting laws.

If you have a medical condition, you don’t have to follow the window tint laws in Indiana.

If you have one of the following medical conditions, you don’t have to follow the window tint law in Indiana:

If you are not photophobic but can show that your eyes are sensitive to the sun because of a medical condition, you can also have darker window tint and a lower VLT percentage.

What Happens if You Violate Window Tint Laws in Indiana?

If you break the window tinting laws in Indiana, you could get a Class A or Class C ticket.

If you decide to fight the violation, it could end up costing you even more.