Drivers tint their car windows for a number of reasons.

Darker windows can also make it harder for thieves to break in, but can you get pulled over in Iowa for tint?

When it comes to window tint, each state has its own laws and rules.

In 1983, Iowa was the first state to pass laws about how dark car windows could be.

Compared to some other states, it’s not the strictest law, but you should still follow it.

If you break these laws, you could be fined a lot of money and face other penalties.

If you want to tint the windows of your car in Iowa, here’s what you need to know to do it legally. 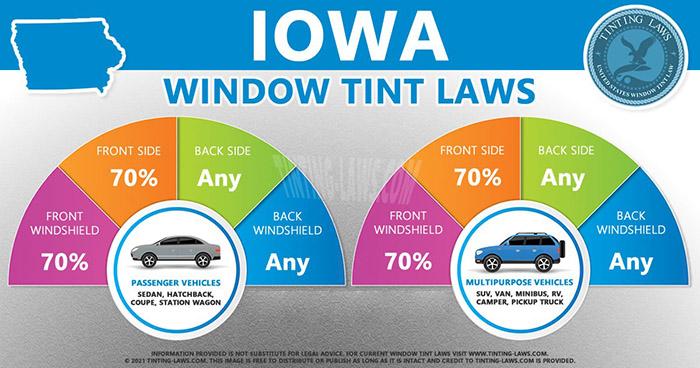 The laws about window tinting in Iowa are based on how much visible light the film lets through.

The state has laws that say how dark window tinting can be on passenger cars and vehicles with more than one use.

A film with a higher VLT rating lets more light through, while one with a lower VLT rating makes the inside of the car darker.

For example, if the tint is 75 percent VTF, it only blocks 25 percent of the light.

A window tint with a 5 percent rating blocks 95 percent of the light, making it much darker.

When choosing a window tint, you should keep in mind that higher VLT ratings let in more light.

The VLT for the window tint is based on the type of vehicle.

Also, the law doesn’t leave any room for a darker tint. Every driver must follow the same rules and laws.

The windshield of a passenger car can’t have a window tint with a VLT rating of less than 71 percent.

State law in Iowa says that more than 70% of light must pass through the film.

The rating also applies to the windows on the driver’s side and the passenger’s side.

In the back of the car, it’s a little different.

As much light as you want can be blocked.

There are no rules about the rear windshield or the back windows for passengers.

As long as you follow the law with the front window tint, you can go as low as 5 percent.

When the front windshield and side windows of these cars are tinted, Iowa law says they have to let in more than 70% of the light.

Anything less than that can get you a big ticket.

You can tint the back windshield and passenger windows however you want. This means you can go as low as you want in the back of the car.

Both types of tint block some light and heat, but how it looks from the outside is different.

Tint makes your windows look like mirrors when you look through them.

From the inside, it helps cut down on glare, but the reflection can be annoying to other drivers.

Animals like birds can also get confused by the mirror effect and fly into your windshield by accident.

In Iowa, the only law that applies to how window tint reflects light is how much light gets through the film.

To legally drive the car, it must be at least 70 percent. It applies to both passenger cars and vehicles that can be used for more than one thing.

The law is clear about how dark window tint can be, and there are no exceptions.

Even if you have a medical condition, you can’t get a darker tint for your car. This is a fairly new rule.

In July of 2021, all exemptions were taken away.

If you have a medical condition or are sensitive to light, you’ll have to wear sunglasses or something similar from now on.

Even though you can’t get out of how dark your car windows are tinted, there are also no rules about where you can use the tint in Iowa.

Do you want your side mirrors to be darker? It’s okay to do in Iowa.

You don’t have to worry about the law or tint colours.

You can tint your windows in any colour you want, as long as you don’t break the law.

If you do choose a colour, be aware that you may get pulled over more than once to have the tint’s VLT rating checked.

But as long as it’s more than 70%, you can legally use coloured tint.

Some states require car owners with tinted windows to put up stickers that say the tint is legal or comes with a certificate from the manufacturer.

Iowa does not require companies that make window film to be licenced or for drivers to carry a licence.

Stickers on the back or front windshields are also not required by law, but if your tint is coloured, it might be a good idea.

It can save drivers a lot of time when they have to stop for traffic.

Tinting Your Vehicle Windows in Iowa

When it comes to the darkness of the tint on your car’s windows, Iowa has strict rules.

It doesn’t make any exceptions. The VLT rating for all vehicles in the front must be above 70%.

After that, the law gets less strict and drivers are free to do whatever they want.

Legally, you can make your back windows and even your side-view mirrors darker.

You can also use a tint of a different colour without breaking any state laws.

Overall, people who own cars in Iowa still have a lot of freedom when it comes to getting their windows tinted.

Why Are SUVs So Popular?
Which Is Better, 5w40 or 5w50 Oil?
How Much Is A Turbo
Best Car Battery Brand