I’ve seen many ways to fix a flat tyre, but using the plug is one of the fastest. It only takes a few seconds to plug the hole and keep the tyre from going completely flat.

Tire plugs aren’t meant to be a permanent fix, so you should only drive on them for as long as it takes to get to a repair shop for a more permanent fix. Depending on where the hole is, you may be able to fix it with a plug and patch kit, which can last for several years.

When used right, tyre plugs can really help you get out of a jam. They are easy to set up and usually work well, but they don’t solve every problem. Here’s what you should know before you try to install one yourself!

What Is a Tire Plug? 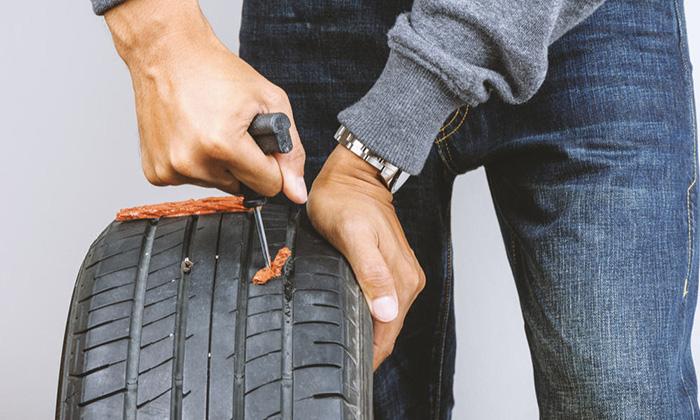 Tire plugs have been around since the early 1800s, when travellers used tree roots or metal wire to fix flat tyres that couldn’t be fixed from the inside.

Tire plugging has come a long way, though, and it’s no longer a guessing game. All you have to do is put the plug into the hole in your car or bike tyre from the outside!

If you use this method, it doesn’t matter where you are on Earth; as long as there is air, which isn’t hard to find in most places, fixing the hole will be much easier than before and you can do it with just about anything in your toolbox.

Tire Plug; Is It Permanent?

Some people argue about whether tyre plugs are short-term or long-term. Tire plugs can look different, but most of them are only meant to fix a flat or punctured tyre for a short time.

Even though they can help temporarily plug the hole to keep air from escaping, they won’t last for tens of thousands of miles like most tyre patches do.

It’s not worth the risk to try to use a tyre plug on its own as a permanent fix. A tyre blowout on the highway at high speed could cause a fatal accident, and it’s just too easy (and cheap) to avoid.

One should always take a plugged tyre to a mechanic to have a patch put on that will seal the damaged area better and for longer. If you want to be safe when fixing your tyres, it’s best to keep them as short-term fixes instead of long-term ones.

How Long Can You Drive on Plugged Tires? The million-dollar question is how long you can keep using tyres that have been plugged. Well, that all depends on how big the hole is.

Even though you can drive with a plugged tyre for up to a few years, it’s not always safe to do so. Most safety experts will tell you not to do this and to get new tyres as soon as you can.

Tire plugs are not meant to be permanent fixes for flat tyres. Instead, they are meant to help you drive safely to the nearest tyre shop, where you can get a permanent fix.

Is a Plugged Tire Safe?

If you only drive with a plugged tyre for a short time, you shouldn’t face any major safety risks. If you put in the plug correctly, it should stop the air from leaking out of your tyre until you can get to a tyre shop.

The only catch is that if you’ve never plugged a tyre before, you have to make sure you do it right and that the plug isn’t broken.

If the plug is broken, it won’t work, or even worse, it might work for a short time and break while you’re driving. If you’re not sure what to do, it’s best to have a pro plug your tyre for you.

Can You Plug It Yourself?

It’s pretty easy to fix a flat tyre. If you are in a place where there are no tyre shops and you need to fix your tyre, follow these steps and you will have a nice plug.

To plug your tyre, all you need is a plug kit.

Find the thing that’s stuck in your tyre and take it out. You can do this with a pair of pliers.

Put the rasp tool into the hole to make sure it’s clean and give the plug a better grip.

Use the insertion tool to jam your plug in, making sure to leave half an inch of the plug out.

Cut away the part you didn’t use.

Pump air into your tyre and use soapy water to look for any leaks. If there are none, you should be fine.

Can You Plug a Tire Twice?

It’s never a good idea to put a plug in your tyre twice. Tire experts say that you should only plug a tyre once. After that, you might want to get a new one.

Getting rid of a plugged tyre will keep you from having a blowout and make sure you can drive safely.

If you’re wondering whether a plug or a patch is better, here’s the thing: it depends on the damage!

Patches are often the best way to fix a tyre because they can be done by both professionals and amateurs. You will have to pay a lot of money to fix a patch.

The tyre experts will take your tyre off your car, check it to find the leak, and patch it from the inside out to make sure the patch is secure. Your tyre expert won’t leave anything to chance because of the complicated process.

Tire plugs, on the other hand, are easier to fix and can be done by anyone. They will be a little less expensive than tyre patches. They also take less time because you don’t have to take the tyre off of the car to put the plug in.

If you are sure you will replace the tyre, a plug is a better choice. Patches are good if you want a solution that will last a little longer.

When Not to Plug

Tire plugs don’t work all the time or in every situation. There are times when putting in a plug will make things worse instead of better. In this case, the best thing to do is to let a professional take care of the leak.

Here are some times when you might need more than a plug:

Even though you can fix tyres with more than one hole, you shouldn’t patch or plug holes that are less than 16 inches apart. If this happens, you will need to get new tyres.

Also, don’t try to fix a tyre with a big hole in it. You might not be able to or you might do more harm than good.

Never plug or patch a hole on the sidewalls of your tyre. You can only use these methods to fix the treads. Putting them on the walls won’t do anything but put you in danger.

Make sure that the hole in your tyre is less than 14 inch across before you try to plug it. If the hole is wider than that, it is not safe to plug it.

When to Replace Your Tire

No matter how good your flat tyre looks or feels, you should plan to replace it as soon as you can. But you can still drive with plugged tyres for a while. Just don’t drive for more than a month.

You could also talk to a tyre expert and ask them what they think about the state and condition of your tyres.

It can be a pain to have to replace a tyre that you just bought. But it will be much easier if you think about how much safer your car will be with new tyres.

The best thing about changing tyres is that you don’t have to buy brand-new ones. You could get your car tires that have been slightly used, and they will serve the same purpose.

As you have seen, there are plenty of dos and don’ts surrounding tire plugging. The biggest “don’t” is to not use tyre plugs as a permanent solution. Remember that the next time a nail gets stuck in your tyre.