Even if you live in Kansas, a great state in the middle of the country, everyone wants their hometown to feel a little bit like Hollywood.

Tinted windows can protect you from the paparazzi and block harmful UVA/UVB rays, among other things.

But no one wants their tinted windows to get them in trouble with the law.

A common mistake that is easy to avoid is getting pulled over and getting a big fine because you didn’t know the law.

This article tells you everything you need to know about window tinting in Kansas, from what you can do to what you can’t do.

Benefits to Window Tint for Your Car

It has a lot of benefits that make the effort and time it takes to install it worth it.

One of the many benefits of tinting your car’s windows is that it gives you more privacy.

Tinted windows protect you from harmful UVA and UVB rays. They work like sunglasses for your car.

Not only are those rays bad for your eyes and skin, but they can also damage your seats by bleaching them in the sun.

Also, just like adding special features to your home can raise its resale value, cars with tinted windows are more popular and may sell for more money.

Drawbacks to Tinting Your Car Windows

There are, of course, some bad things about having your car’s windows tinted.

Dark windows might get the attention of local authorities and make them suspicious.

Police officers who see you might think you are trying to hide something.

That is the main reason why tinted windows aren’t a good idea.

But don’t worry, there are clear laws about window tinting that car owners and the police must follow.

The window tinting law in Kansas has been in place since 1987.

It was the fifth of the 50 states to do this.

Visible light transmission, or VLT, is a measurement of how much light gets through a car’s windows. Laws about window tint are based on this number.

Depending on the type of vehicle, Kansas has different ratios for what is legal.

In Kansas, it is important to know that red, yellow, and amber tints are not allowed.

Above the manufacturer’s AS-1 line, the front windshield can’t have any tint that makes it reflect light.

This is where most small cars fit in. There are coupes, convertibles, sedans, station waggons, and hardtops that are all types of passenger vehicles. 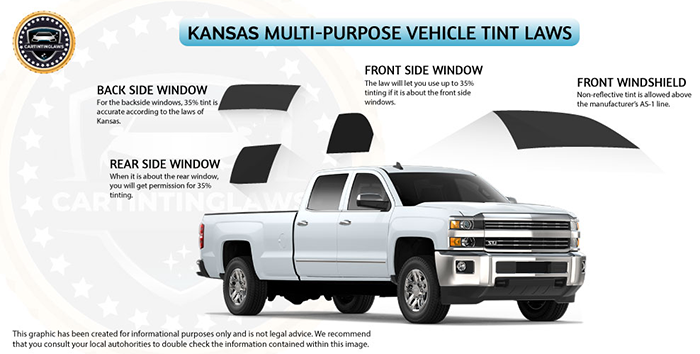 Vehicles that can be used for more than one thing may be subject to different rules (MPV).

These are tougher wheels that can handle different types of terrain and can be used for more than one thing.

In this group are RVs, campers, pickup trucks, vans, SUVs, and passenger vans.

State to state, the laws for passenger vehicles and multi-use vehicles can be different, but in Kansas, they are all the same.

At least 35 percent of visible light must come through the side windows of the front seats, back seats, and rear window. The front window must have a non-reflective tint above the manufacturer’s line.

Can You Get Pulled Over for Tint in Kansas?

If Kansas police think that your car’s tint is darker than what is allowed, they can and will pull you over.

Such a problem gives the police a good reason to pull you over and maybe even search your car.

When you get pulled over, the officer will use a device called a “tint metre” to measure the VLT of your window tint.

The police will use this metre on all of the car’s windows to make sure the rules are followed.

You can avoid this trouble in two main ways. The first step is to make sure that your tint is more than 35 percent VLT, which is the legal limit.

It also helps if the company that tinted your windows gave you a certification sticker that shows the level of tint.

It’s not required by law in Kansas, but it’s a good idea.

Some states have passes for people with medical conditions that make them sensitive to light.

But the state of Kansas does not do this for people with medical conditions that make them sensitive to sunlight.

So, the driver or passenger who is sensitive needs to follow the general window tinting laws in Kansas, which say that at least 35% of visible light must pass through (VLH).

Penalty for Not Following Tinting Laws in Kansas

If you get pulled over and your car is darker than the law allows or the tint is yellow, orange, or red, you will have to pay a fine.

The driver of the car gets the ticket, not necessarily the owner. The company that put the tint on the car may also have to pay a fine.

The added privacy, safety, and resale value of tinted windows make them a great addition to any car.

Still, you shouldn’t worry more about getting pulled over and given a ticket because of them.

Most car windows come from the factory with a 70 percent VLT, so Kansas’s laws on tinted windows are pretty lenient.

Your best bet is to tint your windows so that at least 40 or 50 percent of the light can get through.

This way, you won’t just be under the limit, but you’ll also be less likely to draw the attention of the police.

If you stay within the law and get a sticker from the person who tinted your car to show how dark it is, you can ride in style and confidence.