At first, it might seem easy to find a car that can pull your camper, but the truth is that it is a lot harder than it sounds. But if you need to tow a small camper for all of your summer trips, the Kia Telluride might be the right car for you and your family.

A pop-up camper can be pulled easily by a Kia Telluride. But if you want to pull an RV behind the Telluride, you should know that it can only pull up to 5,000 pounds. This means that you will only be able to pull a smaller RV that has a lot of cargo in it.

What can you expect from the Telluride when it is pulling a camper or small RV? And what is it about the Telluride’s design that makes it so capable? Learn more by reading on. 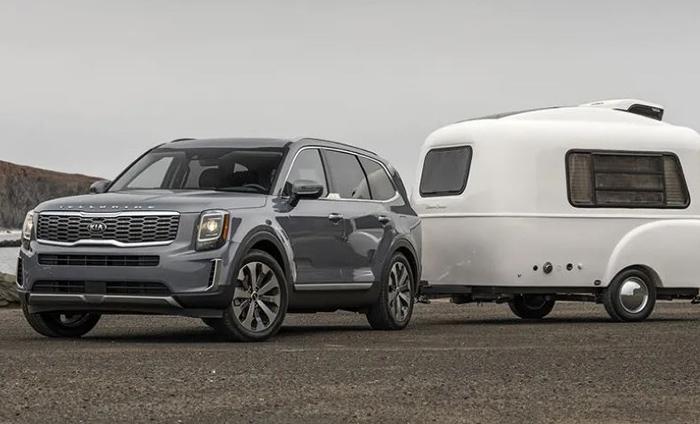 When properly equipped, most SUVs in this class can tow between 2,000 and 3,500 pounds. The most weight that the Kia Telluride can pull is 5,000 pounds, so it has a lot of power to pull.

Since space and comfort are more important to many buyers in this segment than towing capacity, a lot of SUVs top out at 3,500 pounds. They are built on platforms for cars, while the Telluride is built on a different kind of unibody platform.

The engine in the Telluride can make enough power to keep this SUV moving smoothly while towing a small camper or RV. This three-row crossover comes with a 3.8-liter Lambda V6 engine that gives it power. This engine has a strong 291 hp and 262 lb-ft of torque.

The Kia Telluride’s powertrain works well for towing a camper because it is paired with an automatic transmission with eight speeds.

Let’s talk a bit more about the Kia Telluride’s specs, which should make it clearer why it can pull a camper or small RV.

The length of the Kia Telluride is 196.9 inches, to be exact. This is longer than most SUVs, with the Ford Explorer being the only exception.

It is about 78 inches wide and 69 inches tall. This means that, for a crossover, the Telluride is indeed big and boxy.

The Telluride is built on a unibody platform, but because it is so boxy, it might be easy to think it is a truck platform. The Hyundai Palisade also uses this platform. The Telluride was first shown in 2016 as a concept car, but it didn’t hit the market until the 2019 model year.

It has been successful because of how comfortable it is and how well it performs. Now, Kia is working on both a bigger SUV and a truck!

Now, if you want to make the most of the Kia Telluride’s ability to pull things behind it, you will need to add the towing package. It comes with a tow hitch and a rear suspension that can level itself. The latter raises the back of the Telluride to improve the vehicle’s ability to stop (which, like any vehicle towing a heavy load, lose some of their strength when towing hefty weights).

In other words, the Telluride can stay at the same ride height while towing, no matter how heavy the load is. As you might guess, this is very helpful when you are pulling a camper.

Types of RVs that the Kia Telluride can tow 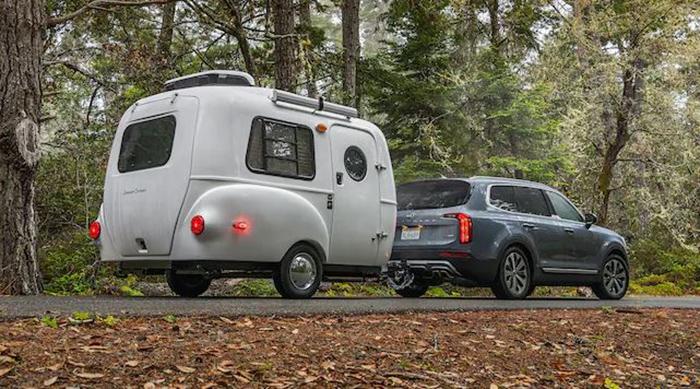 So, what kinds of campers and recreational vehicles (RVs) can the Kia Telluride pull? Think small is the key here.

You need to think about the weight of both the camper and any cargo you might be bringing along, as well as how much the trailer hitch can hold.

Even though the Kia Telluride can tow up to 5,000 miles, you probably won’t want to push it to its limit. If you do too much, you could do some serious damage to the engine or transmission. We all know that fixing those can be expensive. Stress on a vehicle can also come from steep hills, gusts of wind, and roads that aren’t in the best shape.

A teardrop trailer usually weighs around 2,000 pounds, which is no problem for the Kia Telluride to pull. Campers that pop up are also within the weight range of what the Telluride can pull. The canvas they are made of is light enough that it is easy to pull them behind the Kia Telluride.

These campers are easy to pull because they are small and can be folded up. Even if you fill them up and put things in them, they are still within the towing range of the Kia Telluride.

The important thing to remember about the Kia Telluride is that it does not have a connection for a trailer brake or a direct power line to the trailer to charge the batteries on board. The only job of the four-pin connector is to keep your lights working right.

When towing a camper behind the Telluride, this is a bit of a problem because you will probably need trailer brakes. Other mid-size SUVs do have brakes that can be used to pull a trailer.

Closing thoughts on towing a camper with a Kia Telluride

The Kia Telluride is a car that can easily pull a small camper behind it. The camper is perfect because it is light and small. Don’t try to pull more than 5,000 pounds, though, because that could hurt the engine or transmission of the Kia Telluride, which is something you don’t want to happen.

Many people would probably like it better if the Kia Telluride came with a full seven-blade connector. It would make a lot of sense and probably get even more people to buy. When they were making the tow hitch, Kia seemed to have planned to add that connector in 2020, but it never happened. With a seven-blade connector, you can only get the 2021 line-up of Tellurides.

In conclusion, the Kia Telluride is a tower that can do its job. But the 2021 line-up is the best for towing because it has a seven-blade connector. You can’t do that with the 2019 and 2020 models.

If you keep your tent small and light, you should be ready for your next camping trip. The Telluride’s ride is still comfortable enough, and the self-leveling rear suspension helps with that.

What Is the Difference Between 5w30 and 5w40 Oil?
How Long Can A Spider Live In A Car
Are Volvos Good Cars ?
How Much Snow Can You Drive In