More than 100 best-sellers have been written by Phil Edmonston. Additionally, he’s an advocate, a journalist, and even a former member of the House of Representatives. Known for his books, he also holds the distinction of being Canada’s harshest customer.

When Honda and Nissan sued him for five million dollars and lost, it was one of his greatest accomplishments.

As a matter of fact, Phil believes that vehicle manufacturers employ deceptive and inaccurate advertising to mislead consumers into believing that their products are better than they really are. Also in 1969, he founded the Automobile Protection Association.

They use secret shoppers to disclose the truth about the quality of service provided by manufacturers. These brands don’t say one thing and then provide another to the customer.

They employ words and sentences that distort the meaning of what they are saying, resulting in people buying products based on what they read in the ads and discovering the scam afterwards.

These kinds of tricks are used all around the world to make a product look greater than it really is. The spies pretend to be regular automobile buyers to find out exactly where these corporations are slashing costs.

Sales aren’t the only thing the APA focuses on; it also focuses on repairs. Brand repairs are more expensive than third-party repairs because they use high-quality parts unavailable elsewhere. In other circumstances, though, Phil Edmonston disagrees.

Manufacturers are well aware that Phil is not someone to fool with, given his past. A former politician and lawyer who has built an entire firm to guard the public from such swindles and deceptive advertising can be relied on.

What Is Lemon-Aid Car Guide?

The APA’s lemon help used car reviews can only be seen by APA members who are also members of the organization. Is there anything special about these reviews?

Right now, you must be asking yourself this question. I can assure you that it is a wonderful resource for learning everything you need to know about a car before you buy one, including its advantages and disadvantages, the best models, and so on.

There is an example of an automobile on the official APA website, for example, that may be viewed without being a member of the organization in question.

Unlike other firms, APA makes it plain to customers before they pay a penny what they’ll get in return for their money. Let’s have a look at what they have to say about what sets them apart from the rest.

The Mazda 3 is the automobile that they used as an example, and it was manufactured from 2004 to 2009. For each year’s production car, including new models with various engines, they give it a rating.

Customers are advised to go for a 2007 or newer model, rather than older models, due to the latter’s inability to last long. It’s worth noting, though, that the most reliable models also cost more to fix. In comparison to other vehicles in the same class, this one has a low fuel efficiency rating.

To make sure purchasers know exactly what they’re getting into, the book even includes their thoughts and opinions on the vehicle. Other difficulties, such as poor rust resistance in Mazda models, transmission problems, airbag troubles and more are also mentioned…

These are critical flaws that the manufacturer failed to disclose, and they have the potential to result in significant damage or death. As a result, APA membership is necessary to ensure that the buyer is aware of the type of vehicle they are purchasing before making a final decision to acquire it.

List Of The Most Popular Books From Lemon-Aid Car

Every year, new automobiles are added to Phil Edmonston’s evaluation guides, which are revised and re-released. All of those vehicles get in-depth examinations in these reviews.

As of this writing, there have been more than 35 seasons of Lemon-Aid, and the writer doesn’t look like he’ll stop anytime soon. Here are some of the most popular and reputable ones that Canadians read and use. 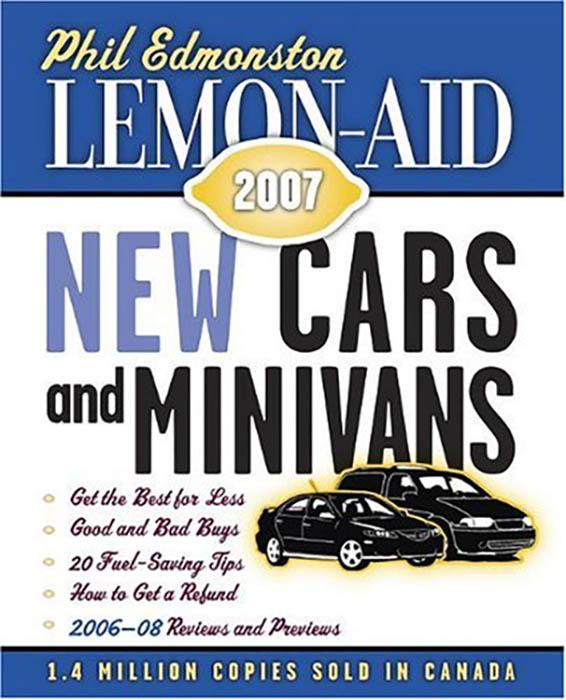 There are a few more 2007 models included under New Cars and Minivans. Take the Acura TL as an example. In order to give the vehicle a more modern look, the grill, bumpers, and lighting have been redesigned for this mid-cycle refresh.

The review also takes a look at the vehicle’s performance, giving an objective assessment of where it excels and where it fails..

In addition, you’ll learn about the author’s track record for dependability and hear his thoughts on the car in question. The honest assessment explains a lot of the ambiguities. To help you select what additional features you want, it even mentions how much it costs, breaking it down to include the navigation system.

Additionally, the book offers the automobile an above-average rating for its performance, which suggests that it will meet the needs of any driver.

Acura’s TSX has a tire pressure monitoring system that is listed in the “what’s new” section. Audi’s A3, A4, BMW’s 3 series, and many more are also on the list.

Thirty years after its release, Lemon-Aid is still a best-seller among children. There are many people who don’t want to spend their money on a car that turns out to have a slew of faults, but the books are thorough and easy to grasp.

The book has been updated to include vehicles that were released in 2009 and 2010. In addition, you’ll learn how to get the most out of your new car and negotiate better warranties in this book.

If you’re looking for information about a vehicle released in 2009 or 2010, you’ll find it here. The findings and conclusions are based on a fair evaluation of the merits and cons of the vehicle under consideration.

You learn everything you need to know about the car’s troubles.. Manufacturers do not inform the public of issues that may or may not pose a harm to their health.

Prospective buyers will benefit greatly from the author’s own assessment of the vehicle. There are no other review services that can compare to this one in terms of quality.

There is also a description of the costs associated with warranties and a warranty policy. 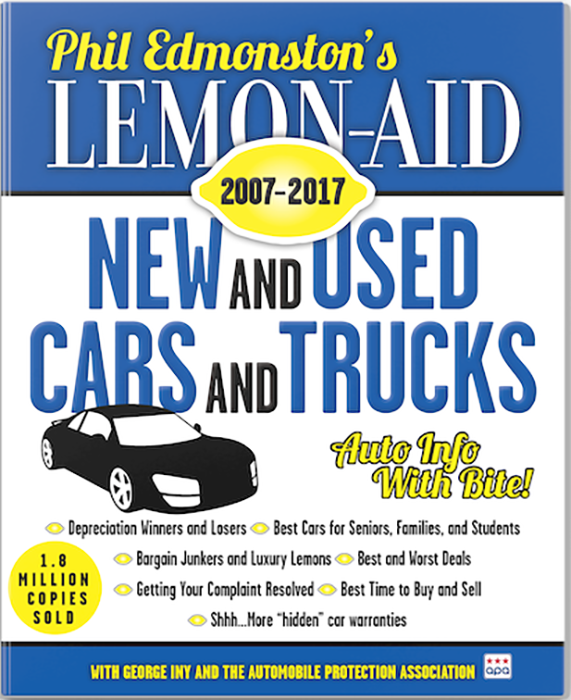 Many people have a soft spot for this book, and it’s well-deserved. All the vehicles that were released between the beginning of 2007 and 2017 are included in this book.

You have access to hundreds of automotive reviews dating back a decade. Phil Edmonston’s books are known for their quality, and this one is no exception.

The previous review format of these books was preferred, but this one is sufficient for a person to ensure that the vehicle they are considering purchasing is worth their money. Customers have used this book to review and even purchase cars, thanks to the extensive information provided for each vehicle.

Because he was the one who beat Nissan and Honda in court, every single one of the writers’ customers buys their vehicles with complete assurance. Then there were those who splurged on a car like the Mercury Cougar, despite the book’s low rating.

Moreover, the vehicles suffered from frequent breakdowns, rendering them completely inoperable. That’s why reading a Lemon-Aid review is always a good idea before making a major decision.

Buyers need to keep in mind only one thing. Due to the low quality of the electronic edition, it is best to purchase a paper copy.

The author has launched yet another edition of his book, this time focusing on the year 2018’s automobiles and trucks, which he thoroughly reviews for the sole purpose of ensuring that consumers aren’t conned throughout the purchasing process.

New cars and newer variations with only a new grille are included in the guide. Audi A5, Q5, BMW X2, X3, Lexus LS500, and Mitsubishi Lancer are some of the most often purchased vehicles in this review. Overall, there are more than 40 new items to choose from.

Customers can find advice on how to make an informed purchase even on the book’s purchase page. Because the author prioritizes his readers, even those who don’t purchase the book will gain knowledge from it.

He urges people, for example, against purchasing a diesel vehicle. In addition, he reveals an eye-opening revelation about the quality of larger companies.

People today have a very different idea of what that means. People should utilize a credit card to make their down payment because canceling is so much easy.

As a result, you’ll have access to a comprehensive database of vehicles, along with pros, drawbacks, and cautions for each model year. 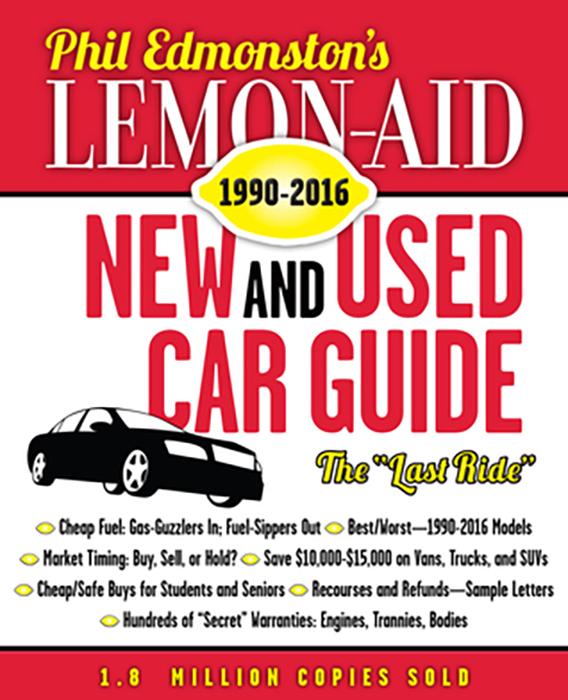 For a comprehensive guide to automobiles dating back more than two decades, this is your best bet.

All automobiles released between 1990 and 2016 are covered by the Lemon-Aid book. When it comes to buying a pre-2017 car, you can rest guaranteed that Phil Edmonston has covered it.

In order to produce a large number of reviews, authors cut corners and supply inaccurate information. That’s why Lemon-Aid stands out from the rest of the pack. It has been a best-seller for more than 30 years for a reason.

You get all the information you need to make an informed decision about a new vehicle, including opinions and facts that brands often conceal.

A book’s rating of the car you’re considering indicates that its performance will exceed your expectations.

Even when people sought to ignore the book’s advice, they encountered the very issues it described. So, put your faith in the author and the wealth of knowledge he has gained over the course of his career. There’s a good reason why more than 2 million copies of the best-selling book on Canadian automobiles have been sold.

Q1: Why Should I Buy A Used Car With Lemon?

A person may wonder why they should rely on this guidance instead of others. This is a reasonable question. Author Phil Edmonston, a lawyer, knows more about most autos than anyone.

In no way am I claiming that other books and manuals are inferior, but the Lemon-Aid guide is unquestionably superior.

Q2: Is There A Law That Protects Used Car Buyers?

Purchasing a secondhand car in Canada is made more difficult by the absence of a federal lemon law. It’s up to the buyer to trust a dealer’s word about how a car performs, but there should be some sort of consumer protection in case the vehicle is a lemon.

A warranty is required if you want to return the vehicle; it’s not required if it’s used. As a result, a guide comes in handy when it comes to selecting the car or truck of your dreams, so that you can have complete confidence.

Q3: How Io I Protect Myself When Buying A Used Car?

That is the premise of this entire article. Unless you are friends with someone who owns the same car, it is impossible to tell if a vehicle is suitable for daily use.

As a result, it is preferable to get a guide that has inspected the automobile from every angle to ensure that you are not surprised by any faults or problems that may arise.

That’s the big question now. Do you have any ideas? Ask for a test drive before deciding to buy a car. Make sure there are no hiccups in the operation of the vehicle. You can check the vehicle’s shocks, acceleration, and fuel economy to make sure nothing is wrong with it.

Phil Edmonston and his Lemon-Aid guides are the subject of a small story here. Buying these books will ensure that you’re getting the best possible value.

Even though I included the five most popular, if your car isn’t in the year range I listed, you can still buy one that meets your needs. I sincerely hope that this post has helped you gain a better understanding of how companies deceive their customers and how you may protect yourself from falling victim to the same traps.