Since when have people been tinting the windows of their cars? A long time!

The first professional car window tint was made in 1966, and now more people than ever tint their car windows.

The business of tinting car windows is part of a non-profit group called the International Window Film Association (IWFA), and many states, like Louisiana, have tinting laws at the state level.

So, what are Louisiana’s laws about tint?

How strictly do either the state police or the DMV follow them?

In particular, can you get pulled over in Louisiana for tint?

If you live in Louisiana and want to tint your car windows, you are not alone.

Most of the South needs car window tinting because of the high temperatures, which can make an AC unit work too hard, fade a car’s upholstery, and expose passengers to UV rays.

Louisiana was the 20th state to pass a law about tinted car windows in 1993.

There are rules about how dark or shiny the tint can be in Louisiana.

But the state has stricter rules and laws about tinting cars. Let’s look at some of them in the list below. 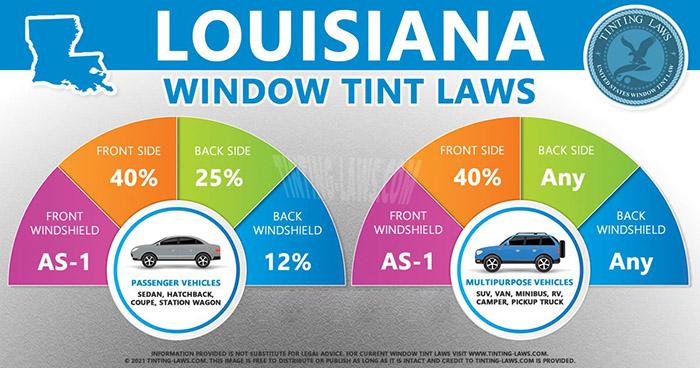 VLT stands for “Visible Light Transmission,” which is the amount of light that must pass through tinted car windows by law.

You can look at this updated IWFA chart to see what the tint laws are in Louisiana.

The state has different VLT rules for passenger vehicles and multi-purpose vehicles, so it’s best to know what the VLT rules are for your type of vehicle in Louisiana.

Non-reflective tint can be put on the front windshields of compact cars, hatchbacks, coupes, and sedans above the manufacturer’s AS-1 line (the top 5 inches).

The tint on the driver’s and passenger’s side of the front window must let 40% of light through.

The laws in Louisiana about tinting the front windshield and front windows of trucks and SUVs are the same as those for cars:

For front seat windows that are tinted, only 40% of the light must get through.

But the tint laws for back seat windows and rear windshields on multi-purpose vehicles in Louisiana are different. There is no limit to how dark the tint must be on the back windshield or back window.

The Louisiana Department of Public Safety and Corrections gives registered car owners, their spouses, or family members with certain medical conditions, such as lupus, porphyria, albinism, melanoma, or a sun allergy, a special permit decal that lets them tint their car windows darker.

As the special permit decal says, people with these kinds of health problems usually have to have darker tint on their car windows.

This permit must be displayed on the front windshield, and a medical affidavit must also be kept in the car.

Any medical exception to the tint laws in Louisiana is reviewed every few years.

No one can get a medical exemption if they have been convicted of a violent crime or a drug crime.

If you have a permit for a medical exemption from Louisiana tint laws and want to sell your car or give it to someone else, you will have to take off the darker tint from your car windows.

Can You Get Pulled Over for Tint in Louisiana?

If you follow the specific VLT rules for your vehicle type or have a permit for a valid medical exemption from the state’s tint laws, you’re doing the right thing and shouldn’t have any trouble with the authorities.

But the state has other rules and laws that you should think about before you tint the windows of your car.

Check if there are any other laws you need to know about to make sure you are following all the rules and laws for the state of Louisiana.

Here, we tried to answer some of the most common questions about window tinting in Louisiana.

Are Colored Car Window Tints Illegal in the State?

Some car tint colours, like red and amber, are against the law in Louisiana.

All of the other tint colours are fine.

What Is Window Tint Certification?

You should ask the person who tints your car windows to make sure they use certified film.

How Can I Ensure the Car Window Tint Is Certified?

Car window tinting shops in Louisiana can prove that they use certified film by giving you a sticker that says “Legal Tinting” and can be put on your car window.

They should put this sticker between the film and the glass on the driver’s side window.

How Much Is Car Window Tinting in Louisiana?

Car window tinting costs can range from less than $200 to almost $250 for a four-door passenger vehicle, so it’s best to get multiple quotes.

Remember to look for a dealer that sells certified film, and check reviews in your area to find dealers with low prices and good customer service.

What Are the Penalties for Breaking Louisiana’s Tint Laws?

If you break the state’s tint laws for the first time, you will have to pay $150.

For each additional charge, a person will have to pay $350.

What Does A Wheel Speed Sensor Do
Ram 1500 Fifth Wheel
How Much Horsepower Do Top Fuel Dragsters Have
When Should I Use 0w20 And When 5w30?