What is a MAF sensor?

The MAF is an essential component in your car’s fuel injection system, and it also plays an important role in determining how much air your engine consumes.

The PCM (powertrain control module) then utilizes this data to calculate the appropriate amount of fuel to achieve the optimal air-to-oil ratio.

The MAF sensor is located between the intake manifold and the air filter of the vehicle’s engine. There are numerous types of airflow sensors, and each has its own set of upkeep requirements. Analog and digital airflow sensors are basically the same.

Even though they all serve the same purpose, they all work differently. The analog airflow sensors produce a changing voltage output, while the digital sensors send a frequency.

Your car’s automatic transmission receives these signals, which are then used to control the air-fuel combination for optimum performance based on the information provided by the mass airflow sensor.

The volume of air entering the cylinders is measured by mass airflow sensors.

The amount of fuel injected into gasoline engines is determined by this information, whereas the amount of flue gas returned to the cylinders by the EGR systems in diesel engines is calculated.

How does a MAF sensor work?

You should be aware that most of these mass airflow sensors use the hotwire technique to measure air flow. It’s located between the Manifold and the air filter, as previously described.

A standard MAF sensor contains two wires that are used to detect the presence of sensors. As the air passing through the heated wire cools, only one is heated by the flow of electricity.

Between the two wires, a particular temperature is maintained. The MAF automatically adjusts the electrical current to the hot wire to compensate for changes in the temperature difference.

The sensor transforms the electrical current to a frequency that the PCM understands as airflow, which the PCM then delivers back to the engine. The engine’s intake air is then calibrated to match the amount of fuel being burned.

Symptoms of a faulty MAF sensor 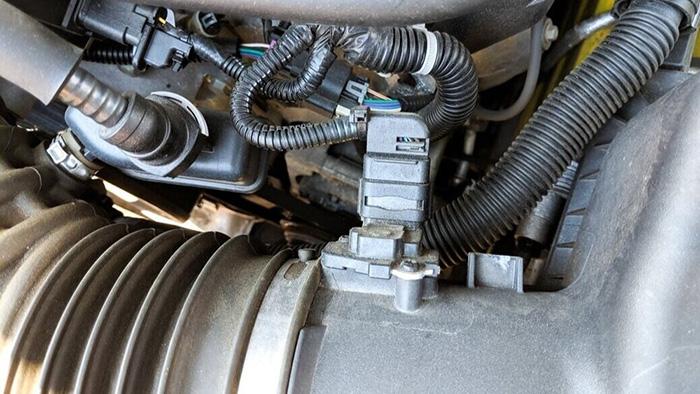 The MAF sensor in your car might be a real hassle, especially if you don’t know how to diagnose it. As a result, the engine won’t know how much fuel to inject for combustion if this component fails. Mass airflow sensor problems might be detected by looking out for these telltale indicators.

A defective MAF sensor may be the cause of excessive exhaust fumes in your vehicle. This is primarily due to an inappropriate oil-air combination ratio. That suggests the PCM is getting the wrong information from the MAF, which is bad news.

In addition, if your car’s exhaust is spewing out black smoke, you’ll need to get it checked out. This indicates that the engine is burning too much fuel as a result of the combustion chamber’s too high air-to-fuel ratio.

Exhaust fumes may have a strong fuel smell if they’re not properly burned, which indicates incomplete combustion. The MAF sensor should be replaced if any of the above issues are present in your car.

A strong fuel smell in the exhaust implies that the engine is not properly combusting. As a result, your automobile will run out of gas more quickly than normal.

Due to a faulty powertrain control module, the engine burns fuel more efficiently and more quickly.

3. The car may be jerking

Unusual power surges or hesitations in the car’s movement are another indicator of a MAF sensor that is defective. On a highway or a ramp, this can happen if you’re travelling at high speeds.

It is extremely risky to drive a vehicle with a malfunctioning MAF sensor that is causing these power surges. Having an auto repair mechanic inspect the problem as soon as possible is recommended.

Your car’s fuel air ratio sensor may be malfunctioning if it provides erroneous data on a regular basis.

In addition, it’s hard to see that there’s a problem here. RPM is the most likely culprit when your car begins to use more gas than usual.

A mechanic will use a scanner to look for this issue because it’s difficult to see. If the problem is at the circuit level, replacing the MAF sensor may not help.

Because of this, it is essential to thoroughly inspect the entire MAF unit. A malfunctioning MAF sensor can cause your car’s PCM to display inaccurate information. Because of this, the engine will either not function properly or will malfunction.

5. It can be difficult to start the car

A defective MAF sensor is most likely to blame for your car’s starting problems. You should be aware of how much petrol it takes to get a car started. A malfunctioning MAF sensor usually indicates that the PCM isn’t supplying enough gasoline to get the engine started.

It is possible that a defective MAF sensor is the result of a weak engine.

In most cases, the check engine light will be illuminated on the dashboard if any of the above symptoms are present.

Some of the more visible signs to watch for are those listed above. Clogged air filters, damaged intake tubes, and a limited exhaust system.

Finally, make sure the entire intake system is free of any of the aforementioned issues to rule them out. 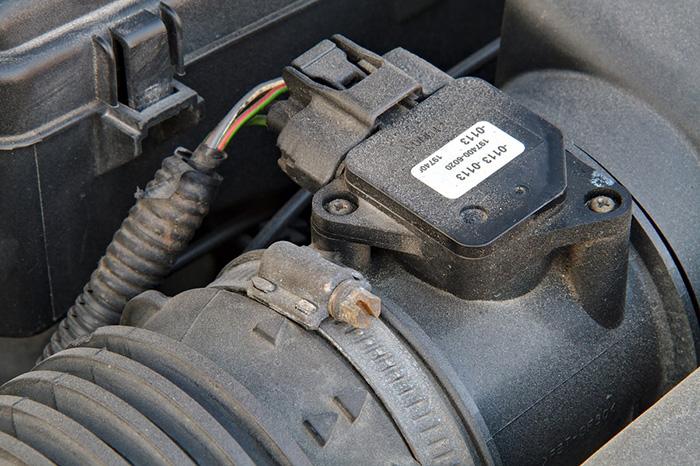 The first step in solving MAF sensor issues is to recognize the symptoms. It’s possible that these solutions will help fix your MAF sensor if you have eliminated all other possible problems with the car’s intake system.

The PCM will not get information about airflow from a defective MAF sensor. A lack of fuel level data makes it impossible to adjust the amount of the fuel in the tank.

There is a risk of engine failure as a result of this. As a result, a new sensor is required.

What are the components of a MAF sensor?

Between the air pipe and the air filter, there is a casing. In this situation, the sensor is mounted or screwed into the surface. The sensor consists of a heated film meter and electronics. A common function of the MAF sensor is to monitor the amount of air entering the engine and then transmit that data to the control unit.

What’s the difference between the MAF sensor and air volume sensor?

Both names mean the same thing, thus there is no difference. Other names for this vehicle include an HFM, an airflow sensor, and a heated film meter are all examples of this technology.

Why is the MAF sensor a Necessity?

For the most part, the MAF sensor’s principal function is to determine how much gasoline to utilize by measuring the mass of air that enters the engine.

Keep in mind that the engine needs 14.7kg of air to burn 1kg of fuel properly. That’s why the MAF is so important for your vehicle’s performance.

The following are quick fixes for common MAF dashboard issues:

Spark Plug Replacement Cost
How Much HP Does A Turbo Add?
Is A Tire Plug Permanent
How Often Does Car Ac Need To Be Recharged