All bike fans will be interested to hear that Bajaj Auto will release the 2017 version of the KTM RC range on the Indian market on January 19, 2017. KTM first showed off these brand new versions of the RC twin at the 2015 EICMA motorcycle show, which was held in Milan. In India, KTM is currently selling the RC 200 and RC 390 models, which are both super-sport bikes. Not only do the two have new gear, but the strong RC 390 has also been given a mechanical makeover.

The RC 390 will soon have a black and orange body and a new, interesting, and attractive white graphic design. Up until now, orange has mostly been used to draw attention to the wheels and trellis frame. Now, orange will also be used on the body panels to make the car even more flashy. One of the changes for 2017 is that the motorcycle will now have a disc that is bigger than 320 mm instead of the current 300 mm. It also meets the latest rules for emissions and has a side-mounted exhaust instead of an exhaust unit under the car. Some features, like switchable ABS, slipper clutch, and ride-by-wire, stay the same. 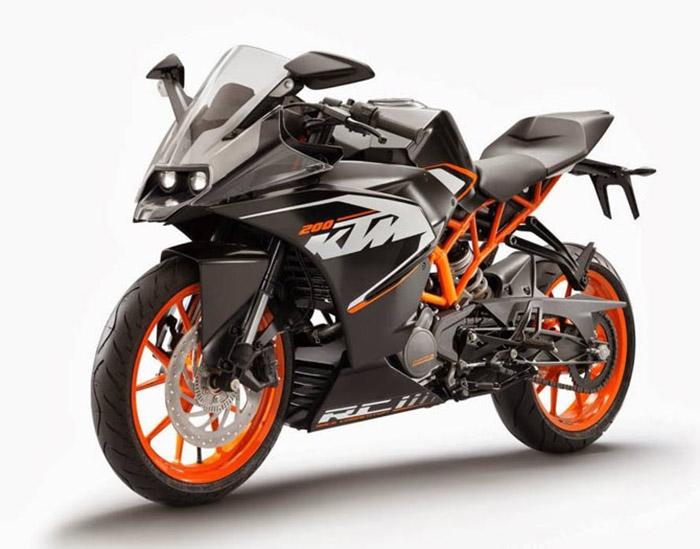 Most of the changes and updates to the RC 200 for 2017 have to do with how the bike looks. This one is supposed to be a mix of white and black with an orange graphic design. The passenger seat will have an extra 12 mm of padding to make the rider more comfortable.

Now, the RC 390 will be powered by a 373.3 cc single-cylinder liquid-cooled engine, which has been upgraded for this version. The engine would still make the same amount of power, which is 43.5 PS at 9000 rpm. But the max torque has gone up to 36 Nm at 7000rpm. In the same way, the RC 200 upgrade will have the same 199 cc single cylinder engine. Euro-4 is now met by the mill’s liquid-cooled system. At 25 PS and 19.2 Nm, the same amount of power is made. But, unlike the RC 390, this bike will still work with the same exhaust system under the seat. Prices are likely to go up a little bit because of these changes in 2017.