Want to drive a supercar with the top down? Most people who like supercars will think that the Ferrari 488 Spider is the best car for this job. But the McLaren 720S Spider is a new car on the market that could be a threat. Last year, the McLaren 720S blew the supercar category away by giving hypercar-level performance at a supercar price.

Now, the 720S Spider is staring the Ferrari 488 Spider right in the face. The fact that the McLaren is 88 kg lighter and has 50 PS more power than the Italian stallion is only reassuring.

With the convertible top, the weight of the car goes up. But McLaren kept this to a minimum, and the 720S Spider is only 48 kg heavier than the normal 720S with a fixed roof. Carbon-reinforced plastic was used to make the roof by McLaren. And the rigidity of the structure is kept because the carbon monocoque chassis is already rigid enough. 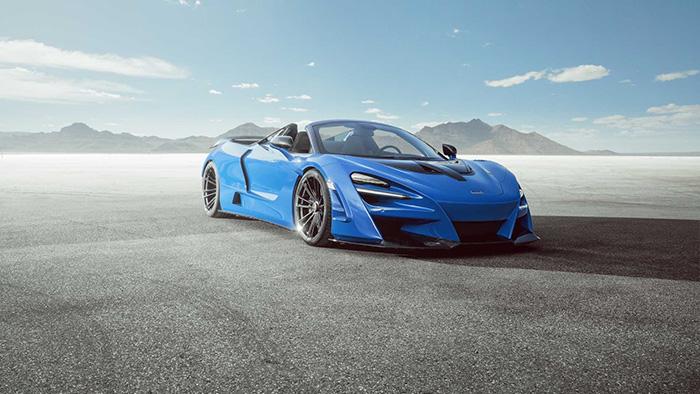 In order for the top to come off, the standard 720S had to lose its fancy “dihedral” doors, which were hinged on the roof. For the Spider version, it had to have doors that open to the side.

In terms of performance, the 720S Spider has the same level of performance as the coupe. The time to go from 0 to 60 mph is the same at 2.9 seconds. The spider version takes just 0.1 second longer to go from 0 to 120 mph. The 720S Spider has the same top speed of 212 mph as the 720S Coupe. But if you want to do a top speed run with the top down, the spider version loses 10 Mph on the top speed. Well, going over 200 mph with the top down should be more fun.

That’s not surprising, since the 720S Spider has the same parts. Its engine makes 720 PS and 770 Nm of power and torque. A 7-Speed SSG automatic transmission is joined to the engine. The McLaren 720S Spider prices start at 237,000 GBP (2.15 crore without taxes).

Click here to get the Mclaren 720S Spider Spec Sheet.

The standard 720S was praised for having a cabin that felt very open and gave a good view of everything. The McLaren 720S Spider only adds to that feeling of freedom. Even more, the company added windows to the car’s “flying buttress” to improve visibility over the shoulder.

Click here to get the McLaren 720S Features and Options Guide.

The car that the 720S Spider replaces, the McLaren 650S Spider, had a cool feature that let you roll up the middle part of the back window. This made it easier to hear the sound of the engine while driving. The same thing has also been added to the 720S Spider. Check out the official trailer:

People have been waiting a long time for the 720S Spider, and they expect to have to wait a long time to get it. It is the hottest drop-top car on the market right now.