Good drivers take care of their cars at all times. They know how important it is to get their cars checked out regularly. For your car to work at its best, you should think about doing both critical and preventive maintenance.

The health of your car depends on these important steps.

Air filters need to be changed.

Change out old tyres for new ones.

Balance and alignment of the wheels

Change the oil filter and oil.

Metal shavings have a big effect on the oil filter and oil changes. These are small pieces of metal that get into the oil and then the engine. When metal shavings get into your engine, it’s not a question of if it will stop, but when.

How do metal shavings get into the engine oil?

Think of the oil in your engine as the blood that keeps it alive. Your car has a lot of parts that move. Without grease, these moving parts will rub against each other and wear out quickly. Oil flows through all of these parts that move.

Now think about sandpaper and what it does to wood. Now think about how fast the pistons in an engine move. Even the best oil in the world will have bits of metal in it because the metal slowly chips off.

The oil filter’s job is to catch these little pieces of metal. And it does that job really well. But it’s not good enough. Some metal shavings will get through and get into your engine at some point. This is why you should regularly change your oil and oil filter.

Signs that your oil has metal shavings 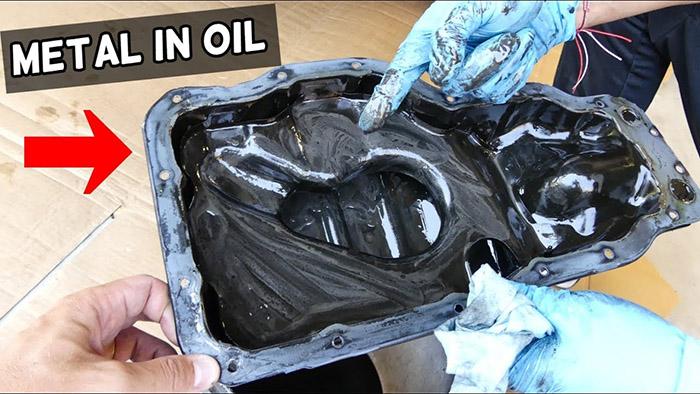 Pay attention to your car at all times. As soon as you turn the key, listen to the engine rev, watch the dashboard lights, and see if the check engine light is on. Every time they drive, good drivers know how their cars are doing.

When your car is in the “idle” mode, it should be quiet and still. But if it shakes and vibrates, it might be because of the oil.

If there isn’t enough lubrication in the engine, the engine is in trouble. If you don’t grease your engine, important parts will grind against each other. If this keeps happening for a long time, the quality of your oil will be hurt.

If you drive a car that has trouble getting up to speed, you will know right away. There are many things that could cause your car to lose power.

If your engine’s power is going down, it means that your engine is having to work harder. The loss of power is a sign that the oil filter is broken and the oil is dirty.

Under normal circumstances, your car’s gas should never get into the engine oil. But it happens. When gas and oil are burned together, they make white smoke. White smoke means that your pistons and the seals around their rings are getting worn down. Oil gets into the cylinders because of this.

When engine oil burns, it means that the engine isn’t getting enough grease. If you see white smoke coming out of your exhaust pipe, you should take your car to a repair shop right away.

Simple diagnostics in modern cars are done with the help of computers. There are warning signs and lights on your dashboard that flash when they detect a problem. Some common warning lights are:

Do You Need a Total Engine Rebuild if You Find Metal Shavings in Your Oil? 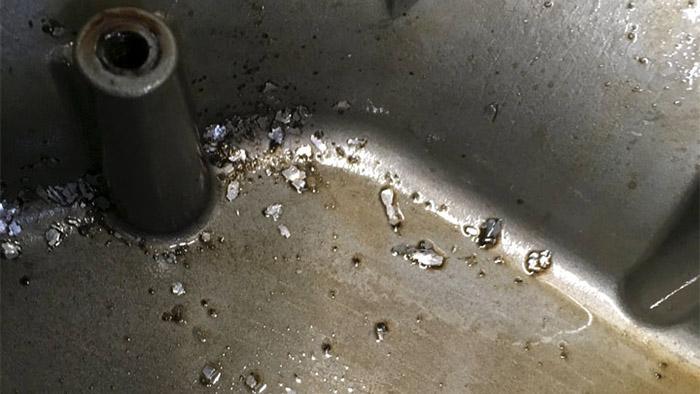 A lot of people think it will be easy and cheap to fix this problem. That’s not true. If you don’t fix this problem, it will cost a lot of money to do so. In fact, by the time you notice there’s a problem, it might be too late and you’ll have to make a major repair instead of a small one.

When you take your car to the mechanic, he or she will look at it to see what kind of damage it has. Don’t forget that the metal shavings are not the problem. If there are metal shavings in your oil, that means something else is very wrong. For example, you might need to replace some parts of your engine. But this could mean that the whole engine needs to be rebuilt.

If your engine needs to be rebuilt, it will cost a lot. In fact, you should plan on paying at least $2,500. And that’s only the beginning. It could cost a lot more than that. It depends on what kind of car you have and how bad the damage is.

For your mechanic to rebuild your engine, he or she will have to do the following:

Remove the engine covers, valves, and other parts.

Take the pistons and rings out of the engine so they can be fixed.

Take care of any other problems they find with your engine.

If your car is small, it might not be as hard for the mechanic to do this. But it can be done by two people if you have an SUV or truck. This means that the mechanic will have to charge you almost twice as much per hour. Make sure you ask them to do the work before they do it. If the repairs will cost as much as the car is worth, it might not be worth it to get them done.