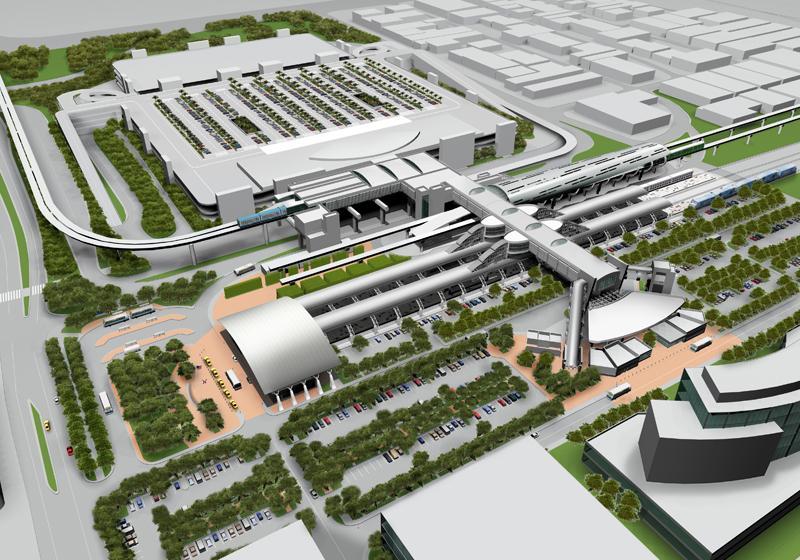 The Miami Central Station (MCS) is the crown jewel of the Miami Intermodal Center (MIC) Program and will serve as Miami-Dade County’s first all-inclusive ground transportation hub. The Florida Department of Transportation is responsible for its delivery and AECOM’s MIC consultant management team was in charge of planning, designing, and preparing construction documents. The Miami Central Station, which opened in April 2015, currently offers connections to Tri-Rail and Greyhound services and is scheduled to start Amtrak service in the fall of 2017.

Located east of the Rental Car Center (RCC) on a 27-acre site, its area is bounded by NW 25th Street on the north, NW 37th Avenue on the east, NW 21st Street on the south and NW 38th Court on the west.

The MCS is an intermodal facility designed to accommodate various transportation connections, hence providing connectivity between transportation options. It will feature grade level tracks for Tri-Rail, Amtrak, intercity and future high-speed rail service. Miami-Dade Transit’s MIA station and Orange Line service, completed in July 2012, is already transporting passengers to and from the airport via Metrorail and Metrobus. Tri-Rail’s Miami Airport Station opened for service in April 2015. East of the tracks will be a U-shaped public esplanade around which private vehicle parking will be available. This public space will be a gateway to the MCS around which bus depots will be located for Greyhound, Miami-Dade Metrobus, intercity buses, courtesy buses and shuttles currently serving MIA, and taxis.

An elevated pedestrian walkway will span across the rail tracks from the public esplanade into the MIA Mover’s MIC Station. The MIC Station is located west of the MCS on the fourth level next to the RCC Customer Service Lobby. The MIA Mover is already transporting passengers between  Miami International Airport and the MIC. Upon arriving at the MIC, they may choose to go into the RCC or proceed to the MCS via the elevated pedestrian walkway.

The MIC Program has also taken into account the Miami-Dade’s Bicycle and Pedestrian Program and throughout the MCS facility provisions for bicyclists, as well as pedestrians, will allow them to safely move about and make their transportation connection.

A joint development component is envisioned at the MCS, bordering NW 37th Avenue to the east and to the west of the public esplanade. The MIC Program has dedicated eight-and-a-half acres of the 27-acre MCS site for the development of this component.

Once the MCS opens for service, it will be a main transfer point for resident commuters and visitors to the South Florida region between the rail and bus systems available. A public transit network will be created in which transit times may be reduced and users may require fewer transfers to get from point A to point B, anywhere between West Palm Beach, Florida and Homestead, Florida.

In this section you will find the various transportation connections envisioned at the MIC. Take a moment to explore.