There is a milky residue on the engine oil cap, but not on the dipstick. When checking their engine oil cap, many individuals have inquired about the milky oil. However, when they inserted the dipstick, they discovered that the oil was crystal clear.

When your engine oil cap is filled with milky oil, but the dipstick is clear, what does this signify for you? Condensation has occurred if this occurs. A car that hasn’t been driven much recently or a shift in the weather could be to blame.

Condensation is a significant indicator if you see milky oil solely in the engine oil cap. Your head gasket will not leak, and engine damage will not occur. In other words, this is a really excellent indicator.

What Does Milky Residue on Oil Cap Mean? 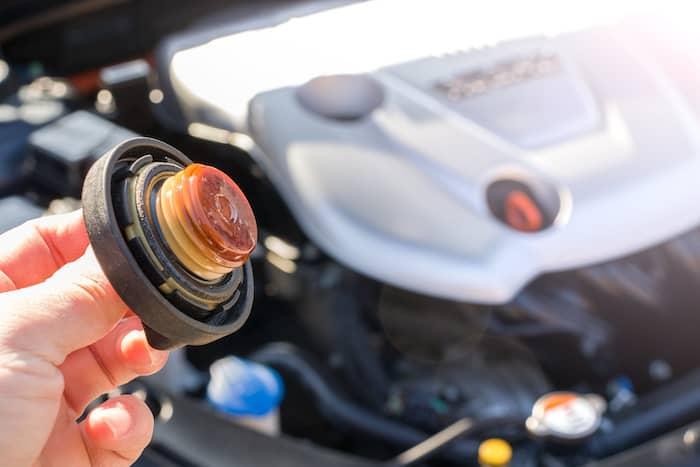 When a car isn’t driven very often, moisture tends to build up. The engine’s water vapors will not be burned off if your trips or drives are too brief. As a result, a buildup of water vapor will occur.

The engine oil cap will then be filled with a milky froth as a result. If the weather suddenly shifts, this could also be a contributing factor. When the weather changes and the car sits at home idling, you’re more likely to see this milky oil.

Your engine oil cap will be filled with a milky froth if your engine oil has been contaminated by moisture or water. Condensation or a head gasket leak could be to blame for this.

If your head gasket is leaking, the coolant will mix with the oil in your engine. These are more serious issues. You should solve this as soon as possible.

This occurs as a result of coolant and engine oil becoming contaminated. Head gasket leaks can result from engine damage, which in turn can lead to a loss of power. In both cases, the situation is extremely hazardous and demands rapid attention and repair.

Should You Be Worried About Milky Residue on Oil Cap?

Obviously! Drivers should be aware that motor oil is regarded as a vehicle’s blood. The car’s performance is maintained through the use of motor oil. All of the engine’s components will be in motion when your car is on the road.

The friction between these moving elements generates heat. Now, the motor oil’s function is to ensure that all of these moving parts are properly greased. As a result, you won’t have to worry about your car engine breaking down.

You must keep your engine oil clean and clear of contamination at all times if you notice a milky residue in your oil cap. This could indicate a filthy or contaminated engine oil. Water pollution or any other substance might cause milky oil.

So if you notice a milky residue on your oil cap, remove the residue and check the oil level in your engine. Refer to a service center if necessary for an oil change.

What Should You Do When You Have Milky Residue on Oil Cap?

Be sure to identify the source of the milky buildup on the oil cap before attempting to remove it. To remove the milky residue from your oil cap and not repair the problem is pointless. The problem will not go away.
So flushing the engine with flushing oil is the best way to get rid of this milky oil. Remove the white foam from your engine oil cap by flushing it with flushing oil. You must ensure that your breathers are clean when doing this.

A new oil is also required. In order to get rid of the problem, refill and use new oil. This problem can also be caused by low-quality oil. To avoid this, switch to a different brand of oil.

It’s not healthy for your engine’s oil to have this kind of dampness. This milky oil needs to be investigated as soon as possible to determine the source of the issue. In order to keep your oil free of water and contaminants, correct the problem as soon as you discover it.

To summarize, if you check your engine oil, you may see milky oil in the oil cap but not in the dipstick. In other words, this is a really excellent indicator. Condensation is a major factor in this.
When an automobile is parked or the weather changes, this occurs. Have it fixed as soon as possible to avoid any future issues.

What Exactly Is Service Brake Assist?
U-turning Laws By State That You Need Know
7 Secrets Your Car Mechanic Doesn't Want You To Know
Car Making Noise After Engine Turned Off