If you just bought a Mini Cooper when it was sunny and warm, you might be curious about how it will handle in the snow.

Since this depends on where you live, the road conditions, and other things, you’ll want to know as much as you can before you drive your Mini Cooper on a snowy or icy road.

Even though Mini Coopers are small, they handle moderate amounts of snow very well. Mini Coopers have front-wheel drive and weigh about 2,000 pounds. They are known for having better traction than similar cars, which makes them a great choice for driving in the winter.

The Mini Cooper is, in fact, one of the best cars in its class for driving in the winter.

Even so, there are still some things you need to think about when driving your Mini Cooper in the snow.

Driving in the winter can quickly become dangerous, so get as much information as you can so you know how to handle your Mini best in the snow.

Can you drive a Mini Cooper in the winter?

Most drivers say that when driving a Mini Cooper in the snow, it’s best not to accelerate too quickly because it can make it harder to get the best traction.

If the snow is a little deeper than you’d like, accelerating steadily will often get you where you want to go and keep you safe on the roads that are slippery.

Are Minis Good on Ice? 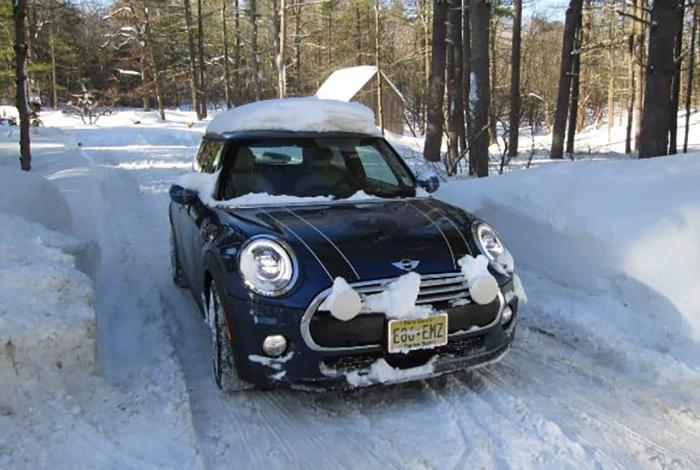 You’ll be glad to know that your Mini Cooper can also drive well on roads that are covered with ice, just like it can handle snow-covered roads with little trouble.

They handle much better than cars with rear-wheel drive because they have front-wheel drive. This gives you much more control.

We’ve found that Minis can handle icy roads well and don’t slide around much because they are so low to the ground.

Of course, how well your Mini does in these conditions will depend a lot on your driving skills and experience.

Driving on a winter day should be much less stressful than you thought it would be, as long as you choose to speed up slowly and deliberately and use your Mini Cooper’s FWD and advanced traction control.

How Much Snow Can the Mini Cooper Handle?

You shouldn’t try to drive your Mini Cooper down a road with a foot of snow on it that hasn’t been cleared by a snowploughs. However, you may be surprised to hear that many drivers have said they were able to safely drive their Mini Coopers down roads that many SUVs can’t handle very well.

Most of the time, you shouldn’t have to worry about your Mini Cooper getting stuck in about six inches of snow.

The only problem with the Mini Cooper in these conditions is that it has a low ground clearance, which means that it doesn’t do well in snow drifts that aren’t too big.

If you find yourself in an unpredictable snow situation, it’s always possible that things could change quickly and make it harder for your Mini.

When Mini Coopers have been tested on the road in the winter, most of the time it has been in parts of Canada and states in the U.S. that have harsh winters.

By doing this, the car’s maker has been able to say with confidence what you and other Mini drivers can expect to see on iced-over or snow-covered roads.

If you’ve had trouble driving your Mini Cooper in the snow and think there’s no hope and that maybe you bought the wrong kind of car for where you live, it’s time to learn the power of positive thinking.

In fact, you couldn’t be more wrong about your Mini Cooper and how it can handle snow.

As a good first step, you might want to think about buying snow tyres.

If you rarely see pavement on your roads in the winter, having these tyres on your Mini Cooper will be like the difference between night and day.

Even though they can cost several hundred dollars to put on your Mini, doing so will make you much safer on the road right away.

Turning off the traction control in some situations is another thing you can do to help your Mini drive better in snow.

Many drivers have found that it’s better to do this on roads with a lot of curves.

Instead of relying so much on traction control, you might want to give your Mini a bit more gas when turning, which makes it more stable.

Some of the time, you might think that making your Mini heavier will help it do better in the snow. But this only makes it harder for you to drive.

When you add more weight to your Mini, you have to make it take longer to stop.

If you do this on snowy or icy roads in the winter, you’ll have a much harder time getting your Mini back on the road.

Instead, keep the Cooper “skinny,” as they say, and light so that it can move quickly.

When driving on roads that are covered in snow and have tyre tracks from other cars, keeping your Mini Cooper’s tyres as much as possible in those tracks will help give you more traction.

Lastly, practise safe driving, which you should do in these conditions no matter what kind of car you’re driving. For example, change your speed as needed, stay aware of what’s going on around you, and don’t do anything you’re not used to.

After all, you don’t want to make a hard driving situation even worse by getting your Cooper stuck in a snowdrift!

If you want to drive your Mini Cooper off-road in the snow, you’ll need a Mini Countryman.

With a standard Mini Cooper, you won’t be able to go very far because the car is too low to the ground.

In addition to the chance of getting stuck, you could also damage the bottom of your Mini, which would be very expensive to fix.

If you drive a Mini Countryman instead of a regular Mini Cooper, you’ll have a lot of advantages.

First of all, you’ll have a lot more ground clearance, which makes it less likely that you’ll get stuck or damage your car.

Next, you’ll get HD wheels and tyres that are made just for you and have much higher sides than a Mini Cooper.

Most of the time, this will help you get through even the worst snowy roads with little trouble.

But keep in mind that even the best vehicles can only handle so much snow, so use common sense when you’re driving your Mini Countryman off-road

How Does the Mini Countryman Handle in Snow?

The Mini Countryman, which is the biggest Mini on the road, is a great choice for people who drive a lot on roads that are always snowy or icy.

When it comes to handling tough winter driving conditions, the Mini Countryman is often compared to different Subaru models. However, the Mini Countryman can handle light to heavy snow as well as any car on the road today, and it has the power and traction to climb very steep hills.

Your Mini Cooper will be surprisingly useful because it has a lot of features that make it a great car to drive in the winter.

You might even smile as you see other four-wheel-drive cars having more trouble than your Mini.

Is Motor Oil And Transmission Fluid The Same
Can You Add 5w40 to 0w30 Oil?
Ducati Monster 797 Launched To Celebrate 25 Years Of Monster
How Long Can You Leave Ignition On