Minnesota Tinted Window Law That You Should Know Updated 02/2023

If you’ve just bought – or plan to buy – a car in Minnesota, you might want to familiarize yourself with the rules and regulations first.

Minnesota’s window tinting regulations are very detailed and strict, and all motorists must abide by them religiously. In 1985, these laws were enacted in Minnesota and have been strictly enforced ever since.

VLT percent is the unit of measurement for window tinting. Visible Light Transmission (VLT) measures the amount of light that enters your car’s windows from outside sources.

It is based on this percentage that the legal restrictions on the amount of window tinting can be set. In addition, Minnesota enables you to add reflective film to your tint because the state may get extremely hot during the summer months.

Tinting laws, rules and regulations in the state of Minnesota will be covered in the following areas.

Are You Allowed To Tint Your Windows And Windshield In Minnesota? 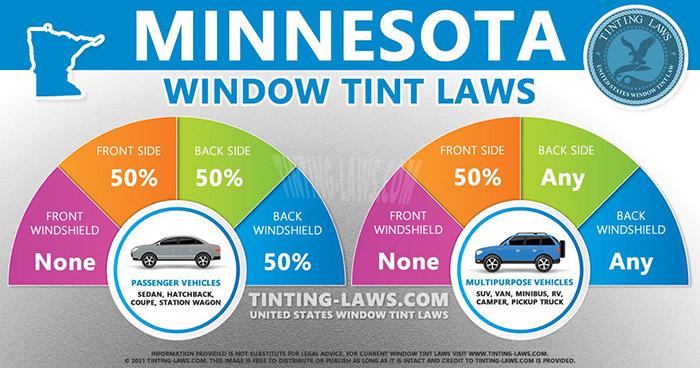 In general, Minnesotans have the option to tint their windows and windshields. Laws and regulations restrict the tinting limits for sedans and utility vehicles in the state.

Be aware of these laws in order to prevent getting into trouble with the law enforcement.

What Is The Darkest Tint You Can Legally Get In MN?

Depending on the make and model of your vehicle, the darkest level of window tint you can get in Minnesota varies. For example, a sedan’s window tinting can only be 50 percent (in case of the front side and back side windows only)

When it comes to the back area of SUVs, tinting restrictions are more lax. If you’re driving an SUV in Minnesota, you can tint the back and side windows as much as you want.

A lot will depend on whatever vehicle you’re asking about and which window you’re referring to. For example, a 20-percent tint on a sedan’s front window is not permitted.

A 20-tinted rear window of an MPV (Multi-Purpose Vehicle) is permitted in Minnesota, but the front side of the vehicle is not. No tint at all, let alone a 20-tinted glass windshield, is permitted in the state for cars and SUVs.

Can You Get Pulled Over For Tinting Your Windows In Minnesota?

Yes, a police officer in the state of Minnesota has the authority to pull you over if you have tinted windows. Most of the time, this occurs when the tinting is greater than 50%.

In most cases, law enforcement officers have instruments and methods for determining how much tint you have on your car. If you’ve surpassed the tinting limit or the officer in question doesn’t know that you have a medical exemption, you’ll be pulled over.

Furthermore, if you drive recklessly, such going above the speed limit, you run the risk of being stopped for having tinted windows.

How Much Is A Tint Ticket In MN?

To avoid a run-in with the law in Minnesota, it’s important to follow the state’s tinting regulations closely. If you exceed the legal limit for window tint in Minnesota, you could be hit with a $135 fine.

Windows in Minnesota can have different limits on how dark they can be tinted depending on the vehicle they’re on. I strongly advise that you review and adhere to these rules, as doing so could land you in serious trouble with the law.

Take the time to carefully review all of the restrictions before you spend money on window tinting.

you cannot tint the windscreen in any way at all

The front-side windows can only be tinted to a maximum of 50%.

The back-side windows are permitted to be tinted no more than 50%.

Only a 50% tint is allowed on the rear window.

You are not authorized to tint the windshield in any way whatsoever.

No more than 50% tint is allowed on the front-side windows.

The back windows can be tinted in any shade of dark.

Use any shade you like on the back window.

During the peak summer months in Minnesota, the sky may be fairly bright. Window tinting laws in Minnesota enable you to have a specific amount of reflective characteristics to keep the light and heat out of your automobile and keep it cooled.

A reflection of more than 20 percent is prohibited in the front-side windows.

The back-side windows are not allowed to reflect more than 20% of the light.

Are not allowed to have more than 20% reflection on the front side windows.

How Do You Get A Medical Exemption For Window Tint In Minnesota?

Many states, including Minnesota, enable drivers to request a medical exemption from the state’s window tinting regulations. There are a few exceptions to this rule, including certain skin problems and conditions that make drivers more sensitive to light.

To summarize, Minnesota’s window tint regulations aren’t overly onerous and can be easily followed. To get your windows tinted in Minnesota, this article has covered all the fundamentals.

Even though the state’s window tinting rules aren’t particularly tough or punishing, law enforcement is extremely diligent in enforcing them. Aside from a few exceptions for medical reasons, there is no restriction on the amount of tint you can apply to your windows under the law.

The fines are not not as high as in some other states, but they’re also not dirt cheap. You don’t want to get fined or endanger yourself on the road if you don’t abide by these rules.