Drivers like window tinting for a number of reasons.

Some of the benefits are that it cuts down on glare, UV rays, and broken glass (in cases of a collision).

Before you tint the windows of your car, you should check your state’s laws to see if there are any restrictions.

When you add shade or tint to your car’s windows, there are two main things that are regulated: how reflective they are and how dark they are.

No matter what, there are rules about window tinting in New Jersey. 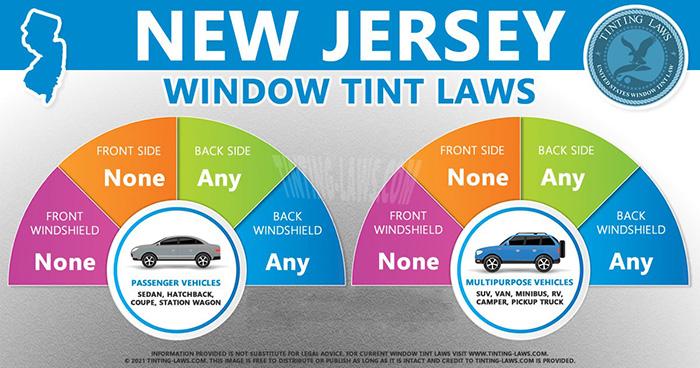 New Jersey has specific laws about tinting and other things that could make it hard to see out of your car windows.

In fact, the law says that drivers can’t drive a car that is “built, equipped, or loaded” in a way that makes it hard for them to see out of the front and sides of the car.

Aside from rules about window tint, the law also says that you can’t put signs, stickers, posters, or anything else that is “not transparent” on the windshield, front side windows, or other connected areas (like deflectors or wings) without permission from the “commissioner.”

In short, this means that anything other than a required parking sticker is probably “illegal” by law.

The law is just as clear and strict when it comes to tinting.

First, the state passed laws about window tinting in 2003. The most recent update came in 2018.

R.S.39:3-74 says that you can’t put “tinted material or film” on the windshield or the driver’s and passenger’s front windows unless it meets three specific conditions.

One of these three rules is:

The tint or film must have come with the car and let less than 70% of light through, except for the top six inches.

Meet the requirements for the medical exemption,

Or they could be put in for law enforcement.

The back window and back side windows can be tinted to any level of darkness.

The laws about tint in New Jersey apply to both cars and vans.

But it’s important to note that other parts of the law cover things like “safety glazing,” which have their own definitions.

With a medical waiver, New Jersey lets people outside of the law tint their windows, which is called “sunscreening.”

You can get an exemption if you have a condition that has been officially diagnosed, like photosensitivity, skin cancer, or certain eye conditions.

Once you get a medical exemption certificate, you have to keep it in the car at all times.

The certificate must have information about the sunscreen or tinting product used, who made it, and where the tint was put on (the specific facility or shop).

The certificate must be on the right side of the front window where it can be seen.

When you show your certificate, the tinting on the front windows, which isn’t allowed otherwise, makes sense.

If you want to sell your car, you must remove the tint from all windows that are exempt for medical reasons.

Can You Get Pulled Over for Tint in New Jersey? 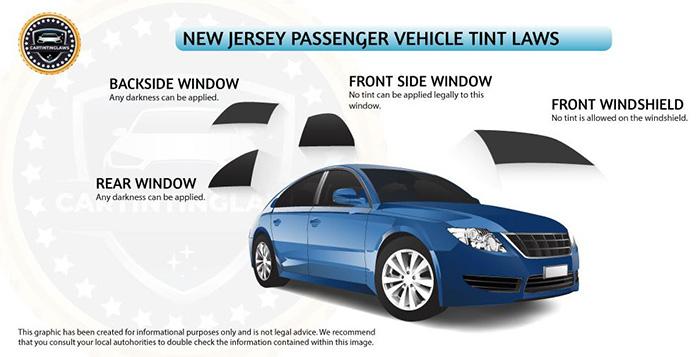 If your windows are tinted, you might get pulled over.

In New Jersey, you can get in trouble if you tint your windows.

If you get caught tinting your windows illegally a second or third time, you could have to pay a fine of up to $5,000.

Before you pay for a tint treatment, make sure the technician is certified and knows the state’s laws so you don’t get in trouble with the law.

Remember that the law says that businesses that sell window tinting products and services have to put up a sign that says:

If your technician offers to add more tint to your windshield or side windows without a doctor’s note, that means they are not following the law.

The front windshield of a passenger vehicle can’t have a dark tint, but the top part of the window can have a non-reflective tint (six inches).

The most VLT that can be charged is 35%.

The front side windows can’t be tinted in any way. The back and back windows, on the other hand, can be made as dark or reflective as you want.

There can’t be any tint on the front windshield or front side windows of a multi-purpose vehicle. There can’t even be a lighter tint at the top six inches of the car.

Why Add a Window Tint?

Window tinting can help cut down on glare and make it easier to see.

But it also blocks some of the sun’s dangerous rays.

If your car windows are tinted, you might be less likely to get too much sun.

Window tinting can also protect furniture, rugs, and other items from the sun’s heat and wear and tear.

The tinting process adds a second layer of protection to the glass.

Some people say that the protection makes it less likely that your windows will break in a crash or accident.

You may also find that even in the hottest months, the inside of your tinted car is cooler (and after hours in direct sunlight).

The laws about window tinting in New Jersey are meant to keep everyone safe.

The best way to keep the car’s most important windows clear is to follow the state’s laws.

When you know the rules and the options, you’ll have all the information you need to choose which, if any, window tinting is best for you.