We have a short guide to help you understand New York’s tint laws, which have been in place since 1992.

The last time the state changed the rules was in 2017, and now testing for window tint is part of the annual inspection programme for cars and trucks.

Our guide will help you avoid making costly mistakes when installing the tint or buying a car that doesn’t meet NY tint laws.

You’ll also avoid annoying and expensive fines for driving or selling a car with tinted windows that don’t follow the law.

Which Vehicles Are Covered by Tint Laws? 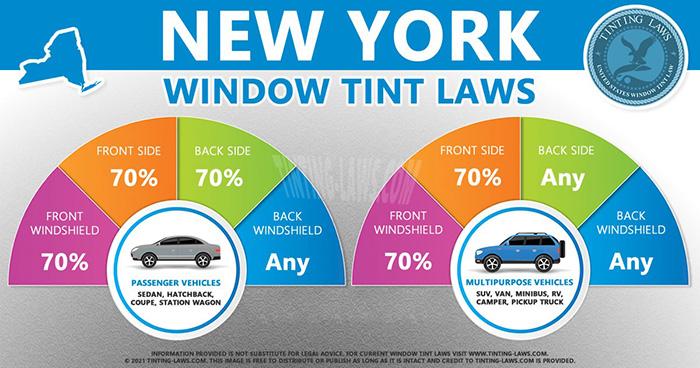 There is one small difference between the rules for cars and trucks, which we will explain below.

The rules apply to windshields and window glass that were tinted after the car was made.

As part of the state’s required annual motor vehicle inspections, window tints must be checked at a DMV-licensed inspection station.

You can tell what kind of car you have by looking at the government-mandated ID tag on the driver’s side door panel.

How Is Window Tint Measured?

Visible light transmission (VLT) is a way to measure how much light gets through tinted glass or window film.

You can easily measure it with a hand-held device that measures how much light gets through the windshield or car window glass.

You can buy a VLT or Tint Meter for $99 to $150 or more, depending on the features, if you want to test the VLT of your car’s glass.

Even better, you can get a free VLT Tint Meter app for your phone, though we can’t say for sure how accurate it is.

Since 2017, when the rules were changed, your car’s annual test in New York includes measuring the VLT of your window tint. 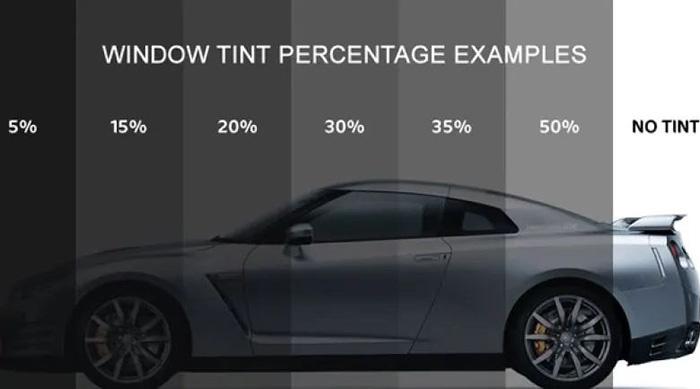 In the Empire State, the rules for how dark the tint should be and how reflective it should be are the same for both passenger cars and MPVs, except for the side windows on the back of the car.

What you need to know is listed below.

For passenger cars made after 1992, the front windshield, front side windows, and rear side windows must let at least 70% of visible light through.

If you have two side mirrors, you don’t need rear windows that let light in.

If not, the back window also needs to be 70 percent VLT.

The same 70 percent VLT rules apply to MPVs, except that the rear side windows can be dark if the MPV has two side mirrors.

A video from the New York DMV makes the rules about window tinting clear.

It shows how a professional measures the window tint on a car.

Most cars from other countries that are sold in the US and most new cars made in the US meet these national safety standards for 70 percent VLT.

This chart is a good summary of New York’s laws about tinted windows for cars made in 1992 or later.

All cars must have windows that let 70 percent of light in, as shown below:

* If the car has side-view mirrors,

New York law allows a dark, non-reflective strip of window tint no wider than six inches to run along the top of a car’s front windshield.

There are no rules about what colours can be used for these tints, and they can’t look reflective or metallic.

If it meets NY window tinting laws, you can use aftermarket glass or make your own window film.

In New York, people who make films don’t have to get their products certified.

Between the glass and the film on each window, the installer must put a sticker that says the tint is legal.

How Much Are NY Tint Fines?

Your car won’t pass the annual inspection until the problem is fixed.

That costs you time, money, and the use of your car. It also costs money to have your car inspected again.

Can You Get Pulled Over for Tint in New York State?

If you want to know, “Can you get pulled over in New York for tint?” Yes, police can pull you over if they think your car’s tint is too dark.

The DMV said that between 2012 and 2017, when the new law went into effect, police wrote more than 710,000 tickets for window tint violations.

If you get pulled over, you have until your vehicle inspection tag’s expiration date to fix the problem. If you don’t, you could get a fine the next time police pull you over.

If you have certain medical conditions or a disorder that makes you very sensitive to light, you may be able to get out of following the law.

The laws about window tinting in New York are clear, and if you put in a little extra work, you can avoid getting pulled over by the police and getting a ticket for having too darkly tinted car windows.

Laws and rules can change or be updated everywhere, so if you have a question, check the state website.

On the website for the New York State DMV, you can find helpful information about window tinting.