Until Tesla Model 3 overtook Nissan Leaf as the world’s best-selling electric car in 2020, the Toyota Prius was the most popular car ever made. 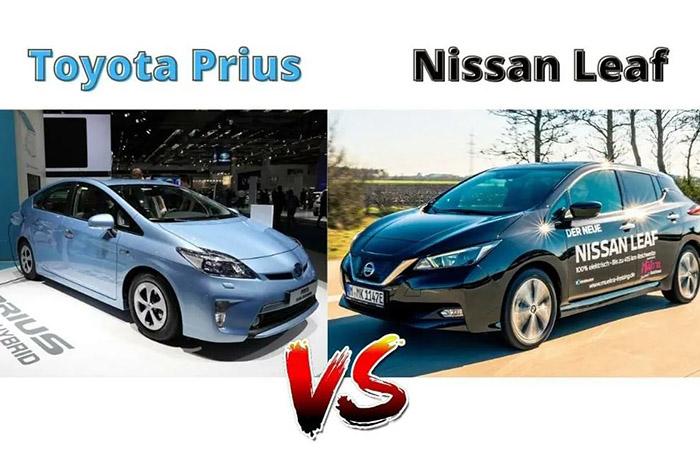 Beginning in 2010, Nissan Leaf has been in continuous manufacturing. Half a million globally were sold by 2020, with 114,827 sold in the United States alone. The 5-door hatchback body type makes it a subcompact or small family vehicle. The front wheels are propelled by an electric motor up front.

Nissan Leaf battery packs have a high failure rate in Europe, according to a research by Warranty Direct in 2015. A total of 50,000 vehicles, ranging in age from 3 to 6 years, were included in the study. The battery failure rate for the Nissan Leaf was found to be less than 0.01%, with a total of three occurrences. Cars powered by gasoline have a failure rate of 0.255 percent.

Leaf’s manufacture is special in that it is constantly tweaked to broaden its range and make modest quality improvements. When the first generation ended in 2017, the second generation took over and is still being produced today. The first generation began in 2010.

The Toyota Prius is known by everyone on the planet. Prius has been around since 1997 and has become a symbol of the hybrid movement. Internal combustion engines powered by gasoline and large-capacity batteries made an excellent marriage. In terms of fuel efficiency, the Prius may outperform any gasoline-powered vehicle on the road today.

the fourth generation of the Toyota Prius

Toyota introduced their plug-in hybrid Prius Prime in the United States in 2012. Currently, the second generation is in production. The Prius Prime’s capacity to run solely on electric power for short distances sets it apart from other hybrids. In the section of the article where we compare the two vehicles, we’ll talk about the differences in the vehicles’ powertrains. 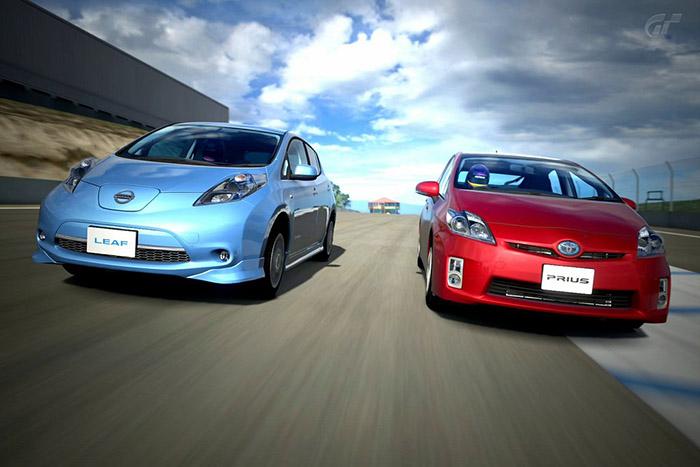 The Nissan Leaf and two Toyota Prius models, the classic and plug-in hybrid, are contrasted in the following section. For the most informed purchase, I’ll present information on safety, fuel consumption, interior comfort and features to help you make the best decision.

Due to the lack of a clear opponent in the form of the Nissan Leaf prior to 2010, I’ll only consider the third and fourth generation Prius cars in my analysis.

Nissan Leaf, Toyota Prius, and Toyota Prius Prime all have distinct features. Leaf is a battery-powered electric car that must be recharged by connecting it to a power source. The electric motor and batteries in the Toyota Prius let it use less gas than a standard car does, therefore it saves money on gas. The Prius Prime retains the gasoline engine, but its high-capacity batteries necessitate plugging in for recharge.

The average fuel usage for the combined drive is shown in the following table. Instead of miles per gallon, the chart for the Nissan Leaf provides information on the vehicle’s maximum possible range when the batteries are fully charged. The most dependable and unbiased source of information for this report is the EPA website in the United States.

Its range was initially somewhat restricted, but Nissan Leaf’s increased regenerative braking, weight reduction, aerodynamic improvements and of course larger batteries have all contributed to its current improved range. When the Leaf was first introduced, it had a 24 kWh battery. By 2016, that had grown to 30 kWh, and by 2018 it had reached 40 kWh, and by 2019 it had reached 62 kWh with the Leaf Plus. In order to charge the 62 kWh battery in under two days using a 120V outlet, we recommend switching to the faster charging options of 240V or a fast charger.

From 48 to 56 miles per gallon, Toyota’s Prius improved in a more linear pace than any conventional automobile. When driven like a regular Prius, the Toyota Prius Prime gets about the same MPG as a standard Prius, although it’s a little bit more expensive. Nevertheless, Prius Prime’s best mileage is achieved when the batteries are completely charged, with the first version achieving MPG of 95. Astonishingly, Toyota’s experts were able to enhance that statistic to 133 MPG!

Prius Prime appears to be the apparent winner at first glance, but the situation is more complicated than that. To begin, the 133 MPG range is only possible with a fully charged battery. When it comes to charging at home, it takes about 5 hours, and it can only travel 25 miles at a time. The 133 MPG figure is based on the fact that the range can be extended with the help of the petrol engine. If you charge Prime on a regular basis, your daily commute or city drive will use virtually no fuel. It’s no different from a conventional Prius when it comes to extended road trips.

Fuel Consumption – Which is the Best?

The year of the car you want to buy will have an impact on how much gas it uses and how far you can drive it.

Because of the short range and high cost of battery replacements, Leaf has lagged behind Prius and Prius Prime since 2010. Batteries will need to be replaced sooner rather than later on these models, which are between six and eleven years old. There is no refurbishing program in the United States, despite the car’s popularity. At least $5,000 will be needed to replace the smallest, 24 kWh batteries. For those who don’t mind a limited range, the second generation (2017+) is a wonderful option.

Prior to 2016, Toyota Prius was the clear leader; however, following that date, it was tied with Prius Prime for second place. The cost of Prius hybrid batteries has astonished me. Prius Prime batteries are twice as expensive as standard Prius batteries, starting at $2,000 each. Because the Nissan Leaf has such a short driving range, I’d rather take out the Toyota batteries even if they cost about the same to replace.

The Prius Prime is theoretically the greatest choice, but there is one problem: the price. The cheapest Prius costs around $24,500, while the cheapest Prime costs around $28,200. Prius is the more affordable option. Higher trim levels result in a smaller pricing discrepancy.

When you consider that a new Prius retains its value better than the Nissan Leaf’s starting price of $31,620, you shouldn’t expect to see a return on your investment. The cost of charging an electric vehicle, while lower, is not zero. For those who live in a state with electric vehicle tax breaks and incentives, the Leaf might reenter the fray.

The Nissan Leaf’s 110 horsepower and 280 Nm of torque electric powertrain is more than adequate for a tiny automobile. 148 hp and 320 Nm of torque are now available with the second generation, which is a big increase.

The electric motor boosts the 1.8L petrol engine to 134 horsepower and 142 Nm, making the third generation Prius a strong performer. Here are the individual numbers for the fourth generation, which I’ve been unable to locate an accurate figure on.. This vehicle has 121 horsepower from the gasoline engine and 142 nm of torque generated by the electric motor.

Even though the electric technology in Prius Prime differs from that in standard Prius, the power output remains unchanged.

None of these automobiles is very enjoyable to drive. Even though they’re marketed as fuel-efficient and dependable, their curb weight of about 3,400 pounds puts them above all other vehicles in their category. However, there is no clear champion in this area, as all vehicles perform similarly within the parameters of their roles. The first generation Nissan Leaf is the weakest.

Toyota Prius Prime has not been officially tested by Euro NCAP because of its resemblance to the basic Prius. To my knowledge, there are no significant changes in IIHS ratings between these two vehicles, with the exception of their headlights.

There is a comparison between the first generation Prius and the third generation Leaf in the first table. Both got top safety pick accolades from the IIHS after passing the tests with a five-star rating and outstanding individual scores.

The second-generation Nissan Leaf and the fourth-generation Toyota Prius have greater price discrepancies. Together with the Prius Prime, Toyota has continued to obtain IIHS top safety pick accolades for its safety aid technologies. The IIHS gave the 2017 Nissan a failing grade for short overlap front.driver side, although the 2018 model has been fixed. It did, however, maintain its position as the top safety selection.

You can’t go wrong with any model you choose when it comes to safety. Make sure to check the IIHS, Euro NCAP, and NHTSA for any unforeseen safety issues or recalls when you locate a model you like.

When shopping for a compact car, don’t forget about the vehicle’s interior room. To avoid confusion, I’ll just call both the normal Prius Prime and the plug-in Prius Prime “Prius.”

The area behind the hips.

Room in the Back

The latest Prius has less legroom than previous models for reasons I was unable to find. There was no change in Leaf’s dimensions, except for a 0. 2″ gain in rear legroom, which puts it just ahead of Prius. No matter which car you choose, it’s going to be fine for daily commuting and short-distance trips.

Because Nissan Leaf and Toyota Prius are direct competitors, their equipment packages are very comparable. A single-zone front air conditioning system, rearview camera, and electric power steering are all standard features on the 2021 versions. Toyota’s adaptive cruise control differs from the conventional one in the Leaf.

AUX and USB inputs, USB connections, and AM/FM stereo are all supported by audio entertainment systems. With six speakers in each of the Prius’s internal speakers, the Leaf has just four. Trims, packages, and specific options can be added to any of the three vehicles.

If you’re looking to buy a car, you’ll need to take into account how each vehicle’s power system compares to the others. Their pricing is directly affected by the power systems they use.

The Nissan Leaf, an all-electric plug-in vehicle, is another option. You’ll pay $31, 670 for the lowest S trim, which is nearly as much as the Prius’ most expensive model. Trim levels increase by several thousand dollars, and the SL PLUS trim costs $43, 970, which is $11, 320 more than the Prius Limited. Because the Nissan Leaf is more expensive than either of the Prius models, you should consider the cost of recharging it as well as any state subsidies you might be eligible for.

The Toyota Prius is the apparent winner, saving you a large amount of money with the base or lower end trim. The price difference between the Prius Prime and the higher-end trims roughly equals out, so you can make your decision based only on the power source. The price of the Nissan Leaf makes it a non-competitor in the normal market. If you’re searching for an all-electric vehicle, there’s no reason not to go with this one.

All models are good, but I believe there is one that stands out beyond the rest. Toyota Prius is the most cost-effective vehicle to buy and maintain, regardless of model year. Because the Prius Prime and Leaf have separate high-capacity batteries or battery sets that must be replaced, you save a lot of money if you buy a used car.

When it’s fresh new, the Prius Prime is a good alternative, but only if you buy it with a higher-end trim. In the case of the Leaf, the $7, 000+ differential is too expensive to recover even if you had a free power supply for the rest of your life! And that doesn’t even take into account the battery’s restricted range or the high cost of replacements.

Because of my extensive investigation, I’ve come to the conclusion that electric vehicles aren’t as environmentally friendly or economically viable as their proponents would have you believe. The Toyota Prius/Prius Prime would be at the top of my list if I were shopping for a car mostly because of its low operating costs and environmental friendliness.

Where Is The Aux In Honda Accord 2007
Can A Bad Catalytic Converter Ruin Your Engine?
2019 Mercedes GLE Spied Images
What Does The L Mean On A Gear Shift