Can you get pulled over in Oklahoma for tint?

In the state of Oklahoma, you can legally tint the windows of your car.

There are, however, some important rules and laws to think about.

Every state has different laws about window tinting, so it’s important to find out what those laws are in your state instead of making assumptions.

Every driver should know the rules of the road in the state where they live.

Here are the legal limits for tinting different types of vehicles and the different windows on your car. 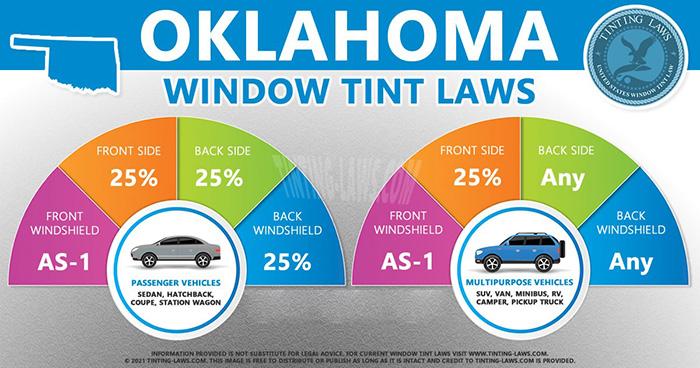 Like many other states, Oklahoma has different laws for different kinds of vehicles.

OK tint laws look at two types of vehicles: passenger vehicles and vehicles that can be used for more than one thing.

Usually, passenger vehicles have the following:

The federal government has set up these categories.

By looking at the VIN label on the inside of the driver’s side door, you can tell what kind of car you have.

Here are the rules that Oklahoma has about window tinting for these kinds of vehicles.

In Oklahoma, the front windshield of a passenger car must have a tint that doesn’t reflect light. The tint can be above the manufacturer’s AS-1 or within the top five inches of the window.

In Oklahoma, the front seat side windows of passenger cars can be up to 25% darker, which means that 25% of the light can still get through.

OK law also says that the back seat side windows can be up to 25% darker.

Cars and trucks in Oklahoma can also have back windows that are up to 25% darker than the rest of the glass.

MPVs are usually SUVs, RVs, vans, campers, sport utility vehicles, minibuses, pickups, and other vehicles that can be used for more than one thing.

If you look at the VIN label on the driver’s side door, you can tell if your car is an MPV or not.

Oklahoma has different rules for multi-purpose vehicles than for passenger vehicles when it comes to window tinting, so it’s important to know the difference.

Oklahoma allows the top five inches of the front windshield of an MPV to be tinted with non-reflective material that goes beyond the manufacturer’s AS-1 line.

In Oklahoma, multi-use vehicles can have tint that is up to 25 percent darker.

The state lets vehicles with more than one use put any level of tint on the back seat side windows.

MPVs in Oklahoma can also have any amount of tint on the back windows.

Oklahoma has some extra laws about window tinting that aren’t directly related to safety or regulation.

In this state, cars with tinted back windows must have two side mirrors on each side.

This is not needed for any other tinted windows.

Even though it is legal to tint a car in OK, it is against the law to use any kind of coloured tint.

For tint film to be sold in the state, it must be certified by the company that makes it.

Even though the manufacturers have to be certified, drivers don’t need a sticker to show that their cars have legal tinting.

Oklahoma does have medical exemptions that let drivers with certain conditions use darker tints than what the law says they can.

To get darker tints, a person must get a written statement from a doctor or optometrist saying that darker tints are medically necessary.

How is Tint Darkness Measured in Oklahoma?

Visible Light Transmission, or VLT, is a way to figure out how dark a window is.

This way of figuring out how much light a window’s tinted film lets through is based on a percentage. The more light can get through, the higher the percentage.

Oklahoma’s window tinting laws are based on the same industry standard.

How Reflective Can Tint be in Oklahoma?

Reflective tint is a metallic film that is put on a window tint.

This element makes a tint reflective so that it can stop sunlight from coming through.

This kind of tint is liked by many drivers because it cuts down on both glare and heat.

Drivers can use reflective tint in the state of Oklahoma.

But it can’t be more than 25% reflective or it’s against the law and not safe.

If you have more questions about the window tinting laws in your state, you should talk to your local authorities.

Even in the same state, different police departments may have different ideas about how the law works, so it’s best to know what’s expected in your area.

The goal of laws about window tinting is to keep people safe.

Too-darkly tinted windows can make it hard for a driver to see and lead to dangerous situations on the road.

Also, tinted windows can make it hard for police officers to see what’s going on when they respond to calls or make routine traffic stops.

If a police officer can’t see what’s going on inside a car, it might not be safe.

Talk to your local DMV or police department to find out more about the tinting laws in your area.