When you turn on your car’s air conditioner to combat the summer heat, it really makes things worse. Most likely, you’ve overcharged your air conditioner, which can lead to a variety of issues.

Poor cooling, no air coming from the vents, strange noises emanating from the engine compartment, and the check engine light coming on are all signs of an overcharged air conditioner. Toxic AC coolant necessitates the expertise of a trained AC mechanic to fix an overcharged AC.

How Can AC Overcharge? 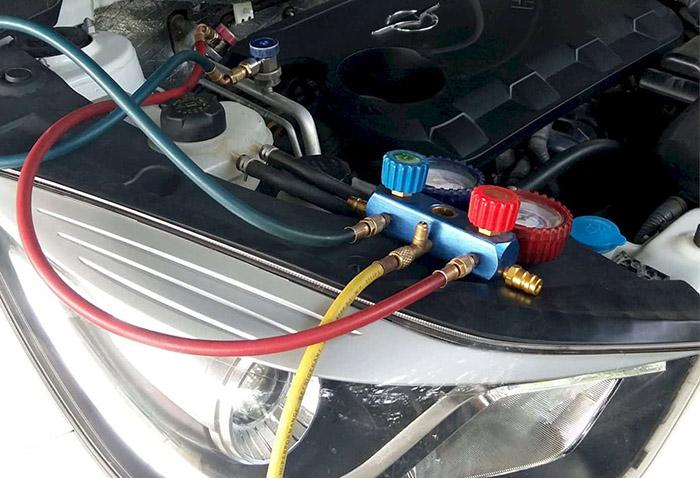 The most common cause of air conditioner overcharging is the use of home-refilled freon cans. Inaccurate pressure gauges cause the system to be over-pressurized, which is unsafe. Adding more coolant than necessary is also a typical practice, which results in an overcharge.

That an AC mechanic could make such a mistake is beyond my comprehension; it seemed impossible to me. Afterwards, I heard of people using coolant cans purchased from Amazon or a local supermarket to charge their air conditioners at home, which surprised me. In my previous writings, I’ve advocated for DIY repairs and spending money on tools and equipment, but charging AC by yourself is something I wouldn’t encourage.

What are The Symptoms of Overcharged AC

You can detect if your AC is overcharged in a matter of minutes or hours, and the symptoms will show up either immediately or over a short period of time.

It’s possible that you’ve overcharged your air conditioner if it’s less effective now that it’s been refilled than it was before. It’ll be difficult to maintain the temperature you’ve selected because the air flowing out of the vents will be too warm, even if you crank up the power.

To avoid overheating in hot weather, turn off the air conditioning as soon as possible if it doesn’t start working within a few minutes of turning on the engine. Don’t risk destroying the system because it’s overcharged to the point of failure!

A broken AC compressor can create a wide range of problems, including ripping the serpentine belt and damaging other parts of the vehicle. After re-filling the coolant, strange noises coming from the engine compartment are a sure clue that something is wrong. To get closer to the compressor, park the car in neutral and lift the hood if you can’t hear it but are having one of the first two symptoms listed. It’s on the serpentine belt, which is easy to spot thanks to its wavy appearance.

How to Bleed Off an Overcharged AC 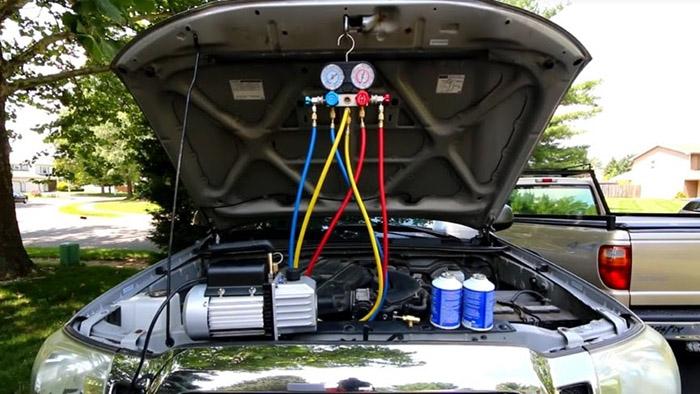 Overcharging an AC can only be remedied by bringing the car to a professional mechanic who has the necessary equipment to depressurize the system.

Only in the event that no parts of the air conditioning systems have been damaged by overcharging will a mechanic charge $100 to $250 to reduce the pressure. Compressors can cost as much as $1, 000, and if the serpentine belt snaps, the damage might cost thousands of dollars.

In an effort to save you as much money as possible, VehicleFreak provides you with the greatest DIY tutorials and product reviews. In this instance, driving your car to an AC specialist is the most cost-effective and best-performing option. Even if you’re an expert handyman, there are some repairs that can’t be done at home.

DIY AC Charging – Should You Do It

You can save money by doing your own repairs, from oil changes to headlamp replacements, but air conditioning is one item I strongly advise avoiding tinkering with at home. If you don’t know what you’re doing, you’ll only cause more harm than good.

I’ve seen everything from $10 cans to $100 AC kits on Amazon, and it makes me question why someone would try to do the task themselves when a mechanic can do it for much less money. Why is the technician still in business when he charges $100 for a can of freon that costs $10? Why? Because he has thousands-of-dollar compressors and gauges that tell him exactly how much coolant your car needs.

How Often Do I Need to Recharge AC?

Using the air conditioner frequently will eventually cause it to run out of power.

Can overcharging the AC cause overheating?

Many people have said they can, but I don’t believe that to be the case. Because of the separate radiator, compressor, and hoses, the air conditioner is a standalone unit. Nothing to do with the cooling system of the engine. When an AC is overcharged, it will not be able to cool the passenger compartment sufficiently, resulting in overheating. In most cases, lowering the windows and keeping the ventilation at a moderate level should suffice.

A sequence of failures is the only way an overcharged AC can cause engine overheating. Compressor pulley and clutch fail when the AC is overcharged, leading the compressor to fail. A jammed pulley can snap the serpentine belt, which powers the compressor.

An overheated engine can result from a broken serpentine belt if the water pump is also powered by the belt, in which case it is dangerous to drive with a broken belt. As a result, I’m confident in saying that an overcharged air conditioner won’t lead to excessive heating.

What happens if you overfill your AC with freon?

The efficacy of the AC will be reduced, and the compressor will be damaged, if the system has too much freon.

Why is my AC blowing hot air after recharge?

You’re most likely to have a coolant shortage if you attempt to recharge the AC yourself, which is a regular problem.

Will an overcharged AC freeze up?

Yes, an overcharged AC can freeze up, and the most expensive portion of the system, the compressor, is most likely to be affected. To avoid this, it’s best to leave AC recharges to the experts.

To fix an overcharged air conditioner, you must take your vehicle to a skilled AC repair. If you’ve come to this page to learn about the dangers of charging your AC at home, I’m here to tell you to stay away from that. When compared to the dangers involved, savings are negligible. Hire a professional to do this task, and look through our other articles to learn how to save money on simpler and safer projects.