The Main Differences Between Prius Vs Volt Updated 09/2022

As gas prices have gone up recently and over the past few years, more and more people are looking into all-electric or hybrid cars as a way to save money on transportation.

If you’re in this group, the Toyota Prius and the Chevy Volt are probably two cars you’ve heard a lot about.

What are the main differences between these two cars that you should think about? Let’s take a look! 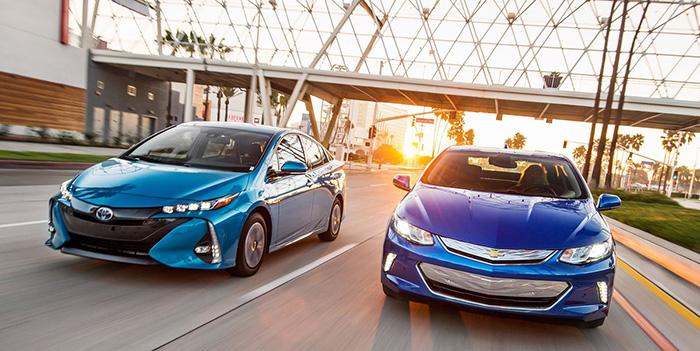 When you compare these two cars, one of the first things you will notice is that one uses gas and the other doesn’t.

The standard engine in a Toyota Prius is a 1.8L four-cylinder engine that runs on gas. But it also has two electric motors, making it a real hybrid car.

The Prius has a modest 121 horsepower and can get at least 52 miles per gallon. This makes it a great car for driving in both the city and on the highway.

The Chevy Volt does things in a different way.

Even though it has a gas tank, it doesn’t run on gas very often, if ever.

The Volt is actually a bit more powerful, with 149 horsepower. It has a gas-powered generator that can charge its battery packs when there isn’t enough electricity for it to run on electricity alone.

2. The Power of the Plug

One of the most important differences between these two cars is that the Volt can be charged by plugging it into an outlet, while the Prius has no plug at all.

When the battery in the Volt is fully charged, it can go 50 to 55 miles on electricity alone. If your car’s battery runs out of juice, the gas-powered generator will keep you moving.

When it comes to gas mileage, the Toyota Prius is better, and by a pretty big margin.

We recommend the Chevy Volt if you want to drive a car that doesn’t make a sound when you’re driving down the highway or through your city.

People who drive the Volt every day say that the fact that it is almost always silent is one of its best features.

Even though the Prius isn’t known for being loud, it sounds like any other car. You can hear the engine cranking out power, just like in almost any other car. 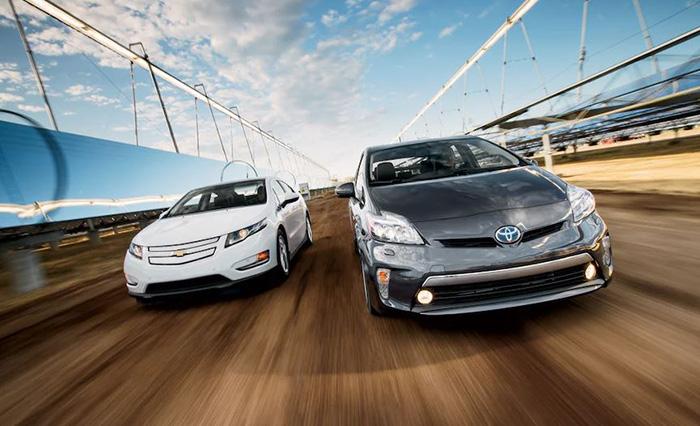 The Toyota Prius is hard to beat if you want to be known for driving a car that looks and feels like it came from the future.

The inside and outside of this car make it look like a real car from the future. Both drivers and passengers we know always comment on how comfortable the inside is.

Even though the Chevy Volt doesn’t look as futuristic as the Prius, it’s still a good enough car on its own that you should give it a lot of thought if you’re trying to decide which one to buy.

Even though the Volt is called a hatchback, it looks more like a stylish small sedan. The noise inside both cars is kept to a minimum.

When you first think of electric cars, you might not expect them to have a lot of space for carrying things. But we’ve found that both the Prius and the Volt will surprise you with how much space they have for cargo.

The Volt will work fine if you don’t plan to carry a lot of things in your car. It’s a good car if you just need to get your groceries home or take a few things on a weekend trip. There’s almost 11 cubic feet of space behind the back seat.

We recommend the Toyota Prius because it has 25 cubic feet of space behind the back seat. This means you can carry bigger loads around town or pack your luggage and other things for a long trip.

Even though the Prius isn’t a very big car, it has about as much cargo space as many of today’s crossovers.

If you want the best of both gas and electric power, the Prius is a good choice. This is especially true if you don’t want to plug your car into an outlet and wait for it to charge for hours.

But if you don’t think this is a problem, you’ll probably like owning a Chevy Volt!

You can plug your Volt into a regular household outlet to charge it, and it will be ready to go in about nine hours. If you have a 240-volt charger at home for your Volt, it will only take just over four hours.

Overall, both the Prius and the Volt get good marks for how they handle on the road. However, the Prius is easier to turn than the Volt.

Whether drivers are on winding city streets or highways with curve after curve, they rarely have anything bad to say about how the Prius drives.

The Volt also handles well in these situations, but some drivers feel that the car doesn’t respond as quickly as they’d like it to, especially on wet or slippery roads.

Even though there haven’t been any big problems with the Chevy Volt’s dependability, we think it will be hard for it to beat the reputation for dependability that the Toyota Prius has built up over the years.

Since the Prius was on the market for a long time before the Volt, the Prius has an unfair advantage in this area. Still, it’s been on the road long enough for drivers to know if it has any major problems.

Prices for cars and gas are going up at record rates right now. But compared to many cars that only run on gasoline, we think the Toyota Prius or Chevy Volt are a pretty good deal.

We think you should get a Prius if you don’t have a lot of money to pay for a car. With an MSRP of just under $26,000, it’s a car that’s pretty cheap for anyone who wants a car that doesn’t use a lot of gas.

Compared to the Prius, the Chevy Volt may cost you a lot more than you thought. The Chevy Volt has a manufacturer’s suggested retail price (MSRP) of $34,395, which makes it one of the most expensive electric cars in its class on the market today.

If you’re willing to pay more for a car that lets you drive almost entirely on electricity, the Volt is a good choice.

The good news is that both the Toyota Prius and the Chevy Volt come with almost the same safety features. There are daytime running lights, a panic alarm, anti-lock brakes on all four wheels, and driver and passenger airbags in the front.

The only big difference we found was that the Volt has a security system for the car, while the Prius does not.

Even though it will be different for you to switch from a gas-only car to a hybrid or nearly all-electric one, we think you’ll be happy with either the Prius or the Volt.