A small pool of oil left behind after moving your car on the driveway is a major problem. In light of how critical oil is to the engine’s health, any leaks should be repaired immediately.

The primary sign of a rear main seal leak is the formation of an oil pool beneath the transmission and engine. Rear main seal repair is pricey, despite the fact that the parts won’t set you back more than $100. Labor alone can cost anything from $500 to $1800, with the typical repair costing $1100.

What is the Rear Main Seal 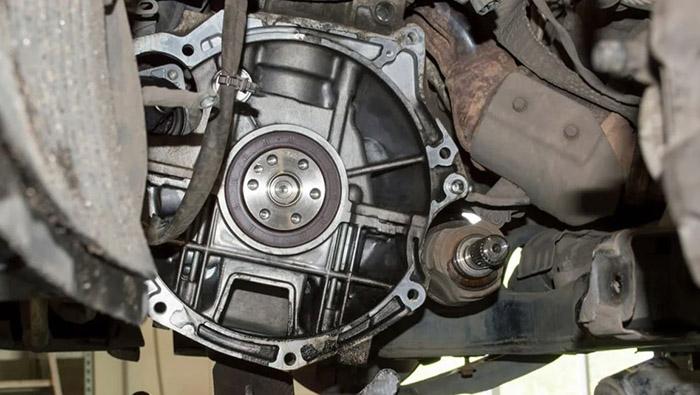 For further information on where to find a rear main seal on a vehicle, please see this article: It is positioned in the engine compartment in transversely mounted engines, whereas in longitudinally installed engines the seal is facing the wheel arches on the left or right.

To keep oil from leaking out of the engine, the seal acts like any other synthetic rubber ring. Because of this, the seal is extremely resilient and will last for many thousands of engine starts. The rear main seal is unique in that it’s quite difficult to access, necessitating the removal of both the transmission and the engine. 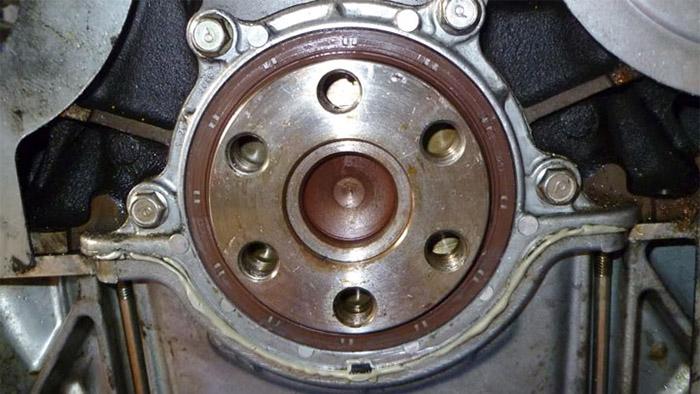 If oil puddles appear under the car, this could indicate that the rear main seal is beginning to fail. However, given the cost of replacing the rear main seal, you should rule out all other possibilities before making a decision.

There will be a leak in the transmission bell housing where it comes into touch with the engine’s crankshaft. Despite the fact that the bell housing appears to be leaking, this is not a conclusive indicator.

If oil is flowing from the top of the bell housing, you should rule out the valve cover gasket, intake manifold gasket, and distributor gasket. Inspect the gasket closely to rule out a rear seal leak, which is sometimes mistaken for a leak in the oil pan gasket. Rear main seal replacement is more expensive than most other causes of oil leaks.

The smell of Burning Oil

Leaking oil, even in minute volumes, will adhere to engine components and catch fire when exposed to high operating temperatures. You’ll be able to know something’s amiss when you open the hood, and the stench of burning oil will be obvious even from the driver’s seat.

It was one of the first lessons I learned from the old school drivers and mechanics that told me what to do when my car’s engine oil light came on. Take immediate action if the light on the dashboard flashes. Shut off the engine as soon as possible.

You don’t know if your car’s sensor has detected a tiny droplet of oil, or if a gasket has ruptured and drained your engine of oil in a couple of seconds. All of a sudden, every movement of the engine is essential since it could be running out of fuel at any moment.

Look for oily components and leaks under the car, as well as on the road if possible. From this point on, the cost of the repairs will be determined by your approach to the problem.

When in doubt, ask for roadside assistance and have your car towed to the mechanic. Even if you don’t notice any signs of leaks, it’s possible that your engine will seize and become scrap metal if you don’t fix the problem right away. Ultimately, the decision is yours, but I strongly recommend that you spend the money necessary to ensure that your engine is properly lubricated. 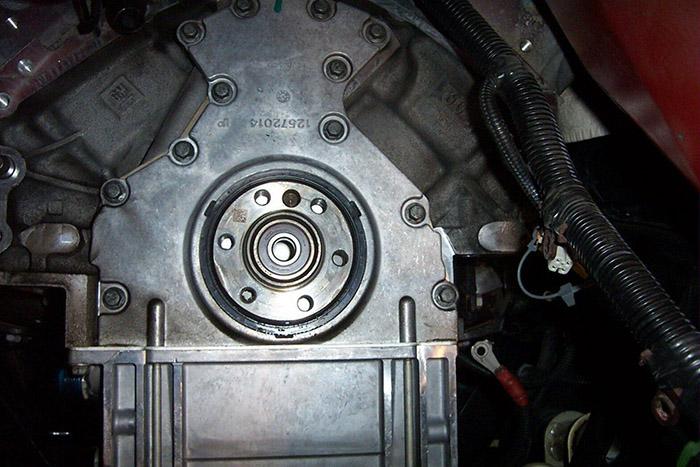 There is, unfortunately, a high price to pay for rear main seal maintenance. On Amazon or Walmart, you can buy the seal for $10 $100, but the labor costs can easily top $1, 000. It has been put together by AutoServiceCost, and some of the information can be found in the table below.

Why Is Rear Main Seal Repair So Expensive?

We tend to overlook or take for granted the abilities necessary to be a good technician. Because it’s not a crude lump of metal, the drivetrain can be repaired with care, even if it’s extremely long-lasting. In addition, consider the cost of the mechanic’s investment in the necessary instruments to repair the rear main seal of the vehicle.

If your mechanic doesn’t trust your diagnosis, he or she will most likely do their own investigation. For this repair, he will need to remove the transmission and flywheel/flexplate to gain access to his seal housing.

It takes a long time, and each part must be thoroughly cleaned and treated with care. Everything must be reinstalled before a second round of testing can determine if the repair was successful or not.

If too much oil is leaked, an oil leak can cause serious damage to the engine. If you have a faulty rear main seal, it will only become worse with time, and it’s impossible to forecast when it will leak more oil and deplete the engine. Adding more oil to the engine can delay the need for repair, as discussed in our article titled. If the engine is already running, may you put in more oil? What If You Wait Until It Cools?

Can you replace a rear main seal without removing the transmission?

The seal between the engine and transmission prevents this. Even though it’s quite rare, working on the rear main seal on some cars necessitates removing the transmission and the engine as well.

How long does it take to fix a rear main seal leak?

The job can be completed in an 8-hour shift assuming the mechanic has the replacement rear main seal on hand and there are no other vehicles in line. As a result, it is quite unlikely that the mechanic will arrive at your vehicle until the seal has arrived and he has cleared his backlog.

The cost of replacing the rear main seal is prohibitive, but it must be done before any other engine components are damaged. To get the greatest bargain, I can only advise you to contact every mechanic in your region and compare pricing, warranties, and delivery dates.

Best V8 Manual Cars On The Market
Best Place To Buy A Car Battery That You Need Know
How Prevalent Are Issues With One'S Automobile?
Accidentally Used 5w30 Instead Of 5w20