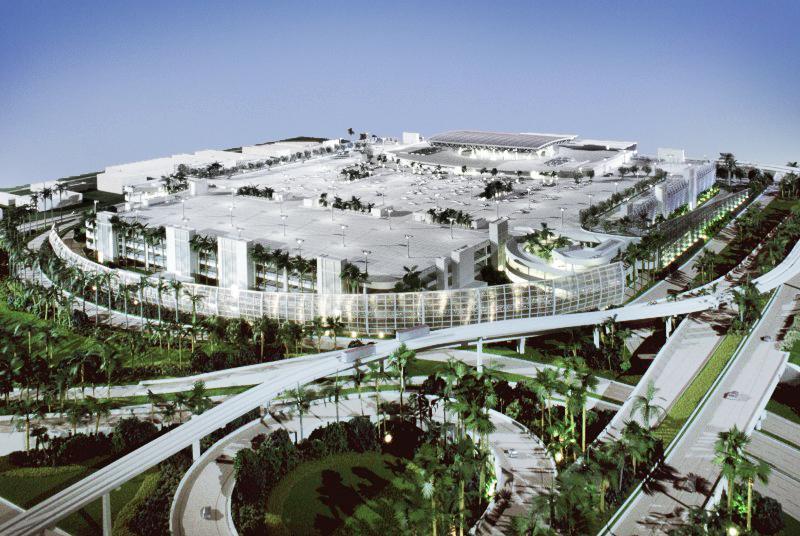 The Rental Car Center (RCC) is the first major structure of the Miami Intermodal Center (MIC) Program and opened for business on July 13, 2010. It was designed and built by the Florida Department of Transportation under the purview of AECOM’s MIC consultant management team, with HNTB providing construction engineering and inspection services and Turner Construction as contractor. Sequeira & Gavarrete, a Heery International Company, was the architect of record. Upon completion, the RCC was turned over to the Miami-Dade Aviation Department, who now operates and maintains the facility.

All rental car companies that operated inside Miami International Airport and many located near the airport have relocated into the consolidated RCC where each company has its own sales counter. Each of the facility’s four levels is 20 acres in size; the first three floors are dedicated to storage and maintenance operations and the fourth level accommodates a spacious customer service lobby where vehicle renters enter and choose their best option among rental car company offers – a virtual rental car shopping mall.

The RCC has many notable features such as its distinctive architecture which serves as a gateway for South Florida’s visitors. It also features the first multilevel fueling system in the United States. This innovative system required careful consideration of technical and life safety challenges, and permits a more efficient and economical car turnaround cycle for rental car companies. The RCC features:

The MIA Mover, a dual track 1.25-mile elevated, light-rail people mover system, began service between MIA and the RCC on September 9, 2011. As a result, there are no rental car shuttles circling the airport’s lower level.