Summers in New England can get hot and sunny, so many Rhode Island drivers choose to have their windows tinted just a bit to block out the sun.

But there are laws that must be followed about windows that don’t let light through.

If you want to make your windows darker, you might want to know what the rules are in this state.

And can you get pulled over in Rhode Island for having tint?

Read on to learn all you need to know about window tinting laws in Rhode Island. 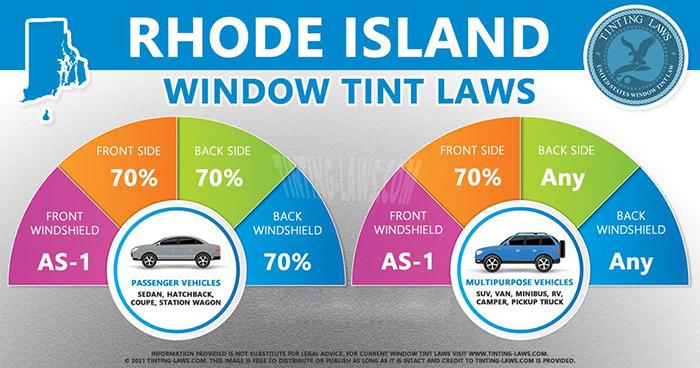 Visible Light Transmission, or VLT, is the most important metric to remember.

This thing measures how much sunlight can get into your car.

In Rhode Island, tinting laws were put in place in 2000. Visible Light Transmission is one of the things you need to think about before buying film for your windows in this state.

If you’re not sure, you can ask your manufacturer or dealer. They should be able to tell you if the film is certified and what the VLT is.

Depending on what kind of car you drive, there are two different sets of rules.

If you have a sedan, you can put a non-reflective tint on your windshield above the manufacturer’s AS-1 line.

The rules for SUVs and vans are the same, so you can also tint your windshield above the manufacturer’s AS-1 line, and your front passenger window must also let in at least 70% of the sunlight.

But there are no rules about how dark the tint can be on the back window or the windows of the back seats.

Aside from the VLT, there are a few other things you need to think about to make sure your window tint is safe.

Some states have rules about how reflective your tint can be, but Rhode Island doesn’t, so you can’t get in trouble for having reflective tint.

When it comes to your side mirrors, there are no rules, and you can choose any tint colour you want.

When you buy tint, keep in mind that manufacturers don’t have to certify their film in Rhode Island. It will be up to you to make sure you use the right shade for the right windows.

You also don’t have to put a sticker on your car to show what kind of tint it has.

But this doesn’t mean that police officers can’t check, because they will have special tools that can measure the Visible Light Transmission. 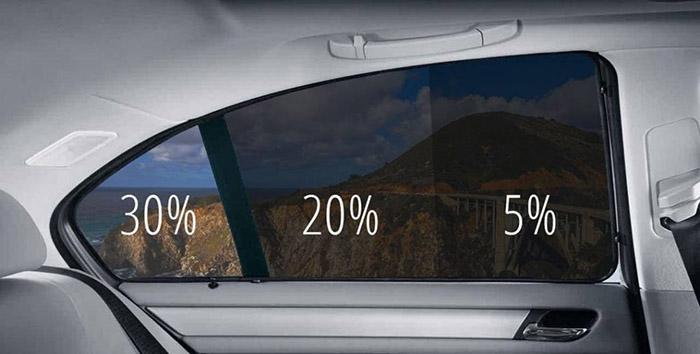 Most people who choose to tint their windows do so for either practical or aesthetic reasons.

You might need to clean up your car or worry about glare in the summer when you drive.

But people who drive for a long time or who are very sensitive to sunlight should worry about sunburn and too much UV light.

In fact, there are many situations in which window tint could be a good safety measure.

For example, people with Albinism, Cockayne Syndrome, Systemic Lupus Erythematosus, or Bloom Syndrome shouldn’t drive without tint because it could be dangerous.

Talk to your doctor about getting an exemption if you have a genetic or inherited condition that makes you very sensitive to sunlight.

You might be able to get a darker tint or one with extra protection.

Now that you know the most important laws about window tint, you may still have some questions.

People who have never had tinted windows may not know all the good things they can do, and they are often worried about the bad things that could happen if they break the law.

Let’s take a quick look at these things so you can make an informed choice about the window tint you buy.

Why Is Window Tint a Good Idea?

Window tint isn’t as important in a state like Rhode Island as it is in the south.

But temperatures can still rise in the summer, so it’s worth thinking about how darker windows can save you up to 45 percent on your air conditioning bill.

Also, tint protects the whole body from UV rays, which is a very important feature for people who drive a lot.

Another benefit is that thieves are often put off by the fact that they can’t see clearly into your car.

They won’t know if there’s anything valuable inside, so they’ll look for an easier target.

Why Is Window Tint a Good Idea?

In Rhode Island, you can get pulled over for tint, but not all parts of the state have the same rules.

Even so, it’s best to follow the rules because you could be fined up to $250 if your tint isn’t right.

Rhode Island is one of the stricter states when it comes to window tint. They have a high VLT limit and a harsh penalty for breaking the rules.

By following the above window tinting laws in Rhode Island, you can drive more comfortably with a light tint and also avoid getting pulled over and having to pay a fine.

Is Cruise Control Bad For Your Car
Are You Allowed To Have A Tinted Windshield And Windows In Texas?
How Long Does It Take To Replace An Alternator
Replace Mass Air Flow Sensor And Check Engine Light Still On