To be built, the Miami Intermodal Center (MIC) Program required going through a Right of Way (ROW) process in order to acquire the land needed for the MIC’s construction.

Early on, FDOT allocated $350 million for Right of Way acquisition, laying the groundwork for the entire MIC Program. Had all the land not been assembled at one time, skyrocketing costs would have made the program prohibitively expensive.

FDOT initiated a speedy ROW acquisition plan in order to secure rights over the needed land, due west of Miami International Airport (MIA). By 2003, 81 parcels totaling approximately 141 acres had been secured for construction of the Rental Car Center (RCC), Miami Central Station (MCS), roadways improvements and the joint development component.  Click here for a map view. 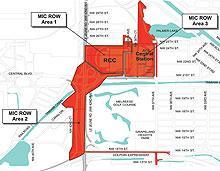 Completed in September 2002, this portion was for the construction of the RCC and for the MTAR, which facilitates roadway movements around the RCC. Geographic Boundaries: NW 25th Street, NW 39th Avenue, NW 21st Street and NW 42nd Avenue (Le Jeune Road).

Completed in December 2003, this portion of the area is the site of the future MCS, a terminal in
which various transportation systems will converge and for MTAR, which will facilitate roadway
movements around the MCS. Geographic Boundaries: NW 25th Street, NW 37th Avenue, NW 21st
Street and NW 39th Avenue.

All ROW was acquired under the eminent domain provisions of Florida Statute 337, Chapters 73 and 74, and was in full compliance and consistent with the Uniform Relocation Assistance and Real Property Acquisition Policies Act and FDOT’s Right of Way Procedures Manual. The Right of Way acquisition process included the following steps: appraisal report, appraisal review, acquisition, environmental assessments, lawsuit preparation, relocation, and property management.

Although the ROW acquisition process was completed in 2003, ongoing property management services continue today. Rental car company operations within the MCS boundaries have been relocated into the RCC and site clearing has been completed for construction of the MCS. Site clearing has also been completed to make way for the joint development component.

The new Metrorail MIA station and Orange Line service also required a ROW acquisitions process that was implemented through Miami-Dade Transit (MDT).  For information contact the MDT Public Involvement unit by phone at 786-469-5420, fax at 786-469-5583, or email at [email protected]