We’ll discuss automotive drive belts in this piece, a belt that isn’t given the attention it needs. The driving belt is a ribbed rubber belt with reinforcements.

The alternator, power steering, and air conditioning all depend on a drive belt that is placed in the engine compartment and is critical to their efficient operation.

Role of a car drive belt

In order to run normally, an engine requires a number of other components. A central computer (ECU) that processes data from various sensors, calculates certain values, and then makes the necessary adjustments for the engine to run properly is used in nearly all modern engines. We have an alternator that is powered by the motor with the help of the drive belt since this computer and these sensors need electricity from somewhere.

When driving, the power steering pump generates hydraulic pressure, which is sent through a belt to a power steering motor. The AC compressor is also equipped with a drive belt in cars with air conditioning systems. There are two auxiliary belts in most modern cars, but in some older models, there might be as many as three.

Importance of the drive belt 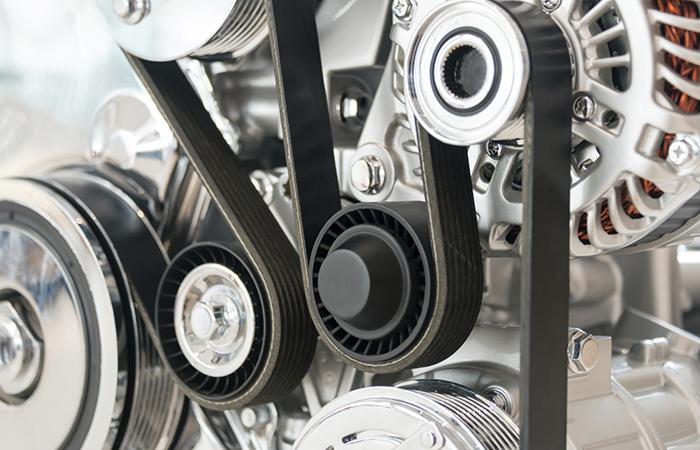 Because this belt is used constantly, most people don’t pay much attention to it, but it’s extremely vital because it’s essential for keeping the engine and the rest of the car operating, as well as providing power steering, climate control, and other necessities.

As a general rule, the drive belt, guide rollers, and tensioner should be inspected at least every 10,000 kilometers (6,000 miles).

How long does an drive belt last? The belt will last you a long time, but be on the lookout for symptoms of aging or wear.

Noise is the most common symptom among the other symptoms listed above. Whistling or squeaking could be heard. Noises are an indication that it must be changed because the device does not ordinarily make any noise.

When replacing it, it’s recommended that you also replace the tensioner roll. Changing the belt and discovering that the roller is defective means that you’ll have to pay for the labor again.

Oil or water on the belt’s surface might create belt noise in addition to normal wear and tear. There is nothing to worry about when it comes to water. Belts need to be replaced in the event of oil, and the location where the oil reaches the belt must be discovered.

What happens when the drive belt breaks?

Whenever the drive belt breaks, the driving experience will be drastically affected. It is impossible to operate the air conditioner or start the alternator without this belt. This means that you’ll keep going to the battery until it’s totally drained, at which point you’ll stop.

Nothing goes wrong. This circumstance cannot be compared to when a timing belt breaks. Remove the strap if it breaks so that the moving parts don’t get jammed.

How to check the drive belt?

An easy method of inspecting a drive belt is to look for any visible cracks or material removal from it, and to make sure that the belt is flexible. The contact surface of the guide rollers should be free of fractures and noise should be eliminated. The tensioner can be easily checked by checking the drive belt’s tightness and then clicking on it to see if it’s difficult to stretch it.