It can be hard to find the old Route 66 because it is now buried under new roads.

Only two of the eight states that Route 66 once went through (and still does, but in a different way) have detailed maps of the route.

In other states, Route 66 is almost gone because it has been written out or left to fall apart to make way for progress.

But just because finding Route 66 can feel like a treasure hunt doesn’t mean the old road isn’t still out there, hidden in today’s interstates and frontage roads, renamed U.S. Highways and state routes.

If you want to drive (roughly) all of Route 66 but haven’t found the right treasure map, these state-by-state Route 66 maps show what we think is the best route along the old Mother Road.

You won’t be driving the old Route 66 exactly when you’re on these roads, because many parts have been torn up, closed, or abandoned. But you’ll get very, very close and won’t miss anything important.

Now, let’s take a modern trip from East to West on Historic Route 66. 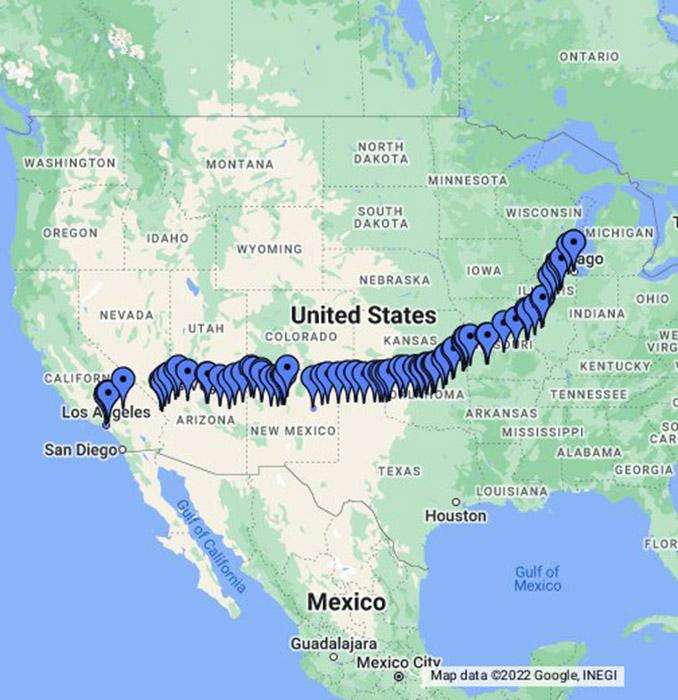 These maps of Route 66 will take you across the state of Illinois, from the route’s historic start in downtown Chicago to the Mississippi River east of St. Louis.

These Route 66 maps will take you across the state of Missouri, from the Mississippi River east of St. Louis to the Kansas border at Joplin. 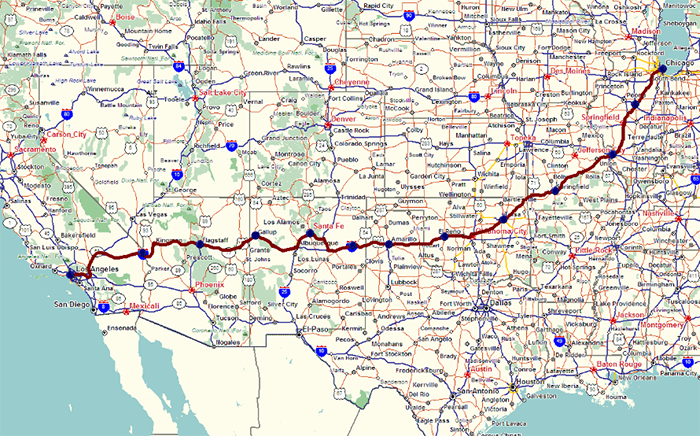 This map of Route 66 will show you how the tiny bit of the historic route that goes through the southeast corner of Kansas fits into the whole.

In most states, you don’t have to go back a lot to get a pretty full picture of Route 66. New Mexico stands out as an exception.

In Central New Mexico, it’s worth going a little out of your way to see more than one way the old road went.

Because of this, these maps have small loops along I-40 and through Albuquerque.

These maps of Route 66 will take you all the way across Arizona, from the border with New Mexico in the east to the Colorado River at the state line with California.

NOTE: The Oatman Highway section of the old Route 66 is a winding, high-elevation road that is thought to be one of the most dangerous roads in the country. Be careful on the road.

These maps of Route 66 will get you the rest of the way across Southern California, from the border with Arizona to Santa Monica, where the road ends at the Pacific Ocean.

When you’re ready for your big road trip along Route 66, you can go in a few different directions.

During its time as the Main Street of America, Route 66 changed its path more than once.

We think that these maps show the best route with the least amount of turning around.

When you start your drive, be ready for a mix of old and new things.

But every part of the old road has something unique to offer, even those that have been taken over by Southern California’s huge urban ecosystem or Chicago’s busy, modern vibe.

We think that to get the most out of Route 66, you should drive all of it, from the cities to the dusty desert ghost towns.

Do you want to know more about the must-drive parts of Route 66, including the parts of the old road that are on the National Register of Historic Places?