There are a lot of interesting things to know about Route 66, but when you’re getting ready to head out on the “Mother Road,” time and distance are more important than history and sights.

Our Route 66 Road Trip Frequently Asked Questions are meant to help you better plan your Route 66 road trip, from figuring out how long it will take you to drive the Main Street of America to figuring out when you should go.

How long does it take to drive Route 66? 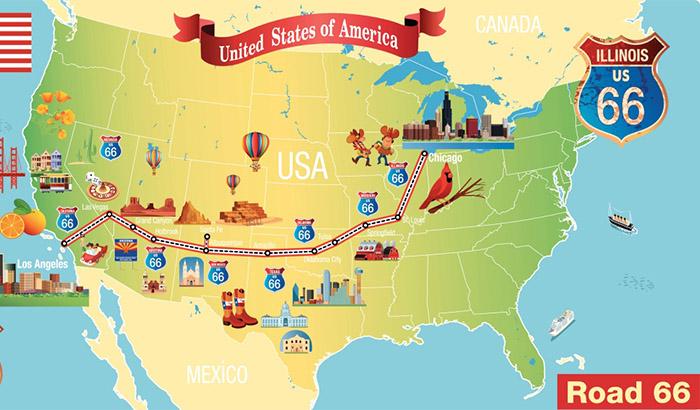 How long it takes to drive Route 66 depends a lot on what you want to see and do along the way.

If you just want to drive the route (along our mapped routes for Route 66), it will take you about 55 hours JUST TO GET THERE.

At an average of 8 hours of driving per day, that’s 7 days of going in the same direction.

If you want to drive back along the same route, you need another 7 days, or a full two weeks, of driving time. (If you stay on the interstates on the way back, you can cut your trip time by a lot, bringing it down to just over 30 hours, or 4 straight days of driving.)

But you won’t have much time to explore even if you drive back and forth on Route 66 for two weeks. For most people, two weeks on Route 66 is just not enough time.

If possible, you should add another week and cut down on how far you drive each day so you have plenty of time to stop.

If you want to stop at every Route 66 attraction and have time for some leisurely meals along the way, a month might be even better.

So, if you want to drive back and forth along all of Route 66, it should take you 3 weeks to a month.

What is the best month to do Route 66?

At any time of year, Route 66 goes through many different kinds of weather.

In Chicago, where the route starts, the weather will be very cold from late October to early April, and it will rain a lot in the summer.

After Oklahoma City, Route 66 levels off in the southwest. This is where you can expect summers with very low humidity and very high temperatures.

Since the weather is so different along Route 66, the best times to drive it are in the spring and fall, when the weather is milder all over the country.

Most people say that mid-April to mid-May and mid-September to mid-October are the best times of year to drive along Route 66.

Just keep in mind that just because the weather is milder doesn’t mean you won’t experience temperature extremes or weather events.

Early spring and late fall can be very hot in the southwest, and the highest points along the route, such as Albuquerque and Flagstaff, can drop below freezing in April and October (or even May or September for Flagstaff).

Still, the best times to drive Route 66 are late spring and early fall.

From beginning to end, the weather will be the most pleasant during these months.

Just remember that the weather can change along the way and pack accordingly, which leads to –

What should I pack for Route 66? 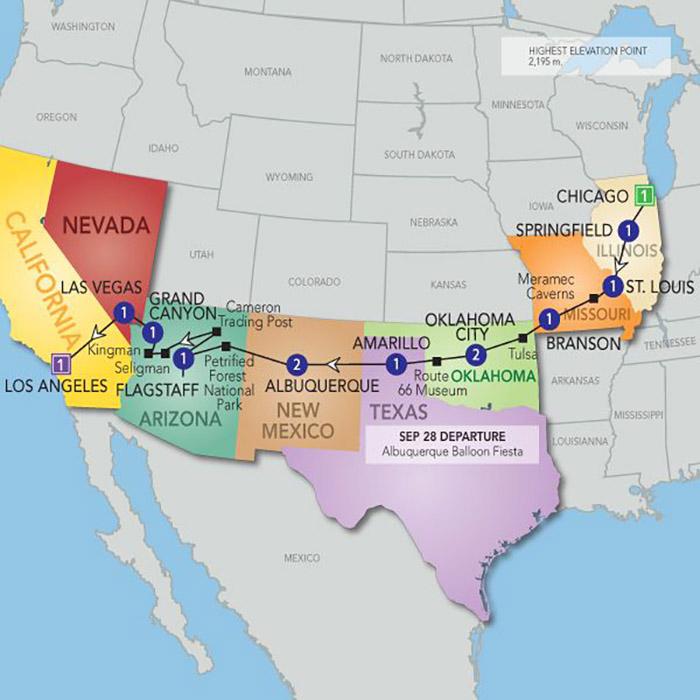 When you pack for Route 66, pack mostly the same things you would for any other road trip.

Make sure that you have:

You should bring clothes for both warm and cold weather, like a warm coat, a warm hat, gloves, a sun hat, and some extra blankets for the car.

Having enough water. You don’t want to be stuck in the desert without it.

Snacks. Or get a lot of them early on the way. As you move toward the West, there are fewer places to stop and rest.

An atlas or map. In the west, it’s also harder to get cell service and use online maps.

What is the most scenic part of Route 66?

It’s hard to say which part of Route 66 is the most beautiful.

It all depends on what you think is beautiful.

In the Midwest, you’ll pass through plains and prairies with lots of open space.

In the southwest, you will see deserts and rocky mountain ranges.

When you cross the Colorado River into California, you’ll end up at the Pacific Ocean.

Route 66 has a lot of different views, and the word “scenic” can mean different things to different people.

But most of the amazing things we’ve seen are in the Southwest, so we think your most beautiful moment will be somewhere west of Texas.

Can you still drive the entire Route 66?

Almost. You can still drive along the same general route, but some parts of the old road have been closed or left to fall into disrepair. (Some of them can still be walked over.)

It is thought that about 80–85% of the original route is still there.

Does Route 66 go through the Grand Canyon?

That would be great, right?

Route 66 does go through Williams, Arizona, which is one of the entrances to the Grand Canyon. This means that the Grand Canyon is a great place to stop on your Route 66 road trip.

Is driving Route 66 worth it?

It depends on how much you care about history and the open road.

Many parts of Route 66 look nothing like they did in the past.

This is especially true in cities, where new buildings and conveniences have mostly covered up old ruins.

But there are also parts of the route where not much has changed and you can easily picture the road and its surroundings as they were when Route 66 first went through town nearly 100 years ago.

We think that the drive is well worth it to see these pieces of the past.