Inconsistencies in the road, such as potholes, can be absorbed by a car’s shock absorbers and struts. Additionally, they aid in steering, braking, and acceleration.

Shocks aren’t standard equipment on all vehicles; some use struts, while others have a hybrid design.

This post will also explain the difference between struts and shocks in order to offer you a clearer idea.

Start with the fundamentals and make sure you’re on the same page!

Incorrectly, shocks and struts are frequently used interchangeably. The reason for this is that they provide the same function, but are not identical components.

Struts cannot be used to replace faulty shocks, and vice versa. Axles with shocks and struts are commonplace in automobiles.

Shock absorbers are separate from the suspension system, whereas struts are part of it. As a result, struts can perform a few more tasks than shocks.

Struts offer structural support for the suspension and retain the tire in the correct alignment in addition to decreasing bounce and roll and stabilizing the vehicle, like shock absorbers do.

During a wheel alignment, the struts are directly adjusted to vary the camber and caster angles.

This also implies that replacing struts usually necessitates an alignment, whereas doing so with shocks does not.

When Is It Time To Replace Your Shocks And Struts? 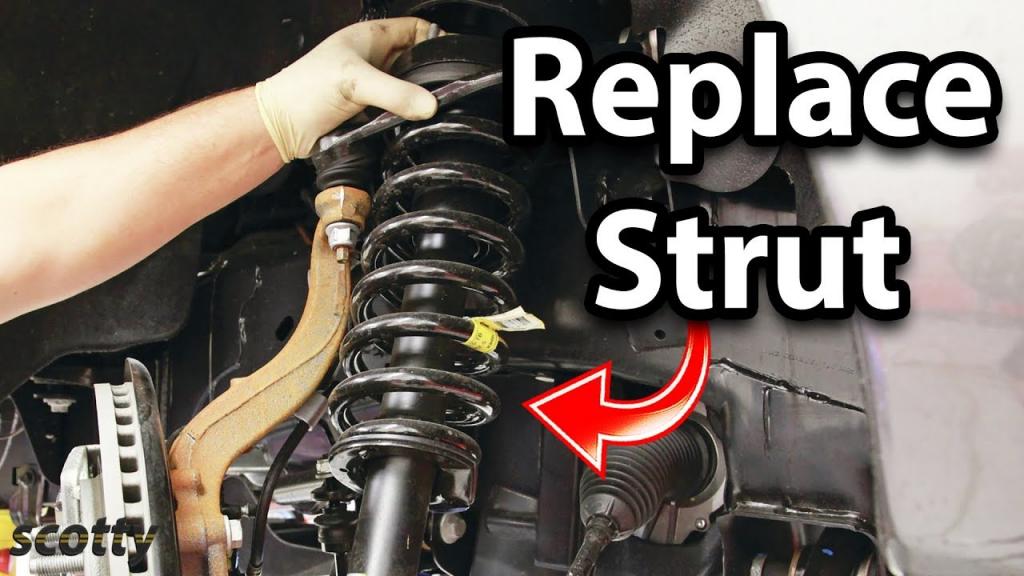 Once you’ve learned the differences between struts and shocks, you’ll want to know how often each needs to be updated.

When it comes to your car’s shocks and struts, you may notice a few warning signs. Examples of warning indicators include:

If you find that your automobile is leaning to one side, it may be due to worn out shocks and struts. When it’s windy, you might see the car sway back and forth.

A faulty suspension system might cause your car’s wheels to bounce, resulting in less continuous contact with the road. As a result, the tire will degrade in an unintended manner.

Scalloping/cupping, which are high and low places on the tires, may also occur as a result of the faster wear on the tires.

There may be an issue with your suspension if you notice that your car shakes even when the road is flat.

In addition, if the steering wheel shakes on a smooth surface, old shocks and struts may be to blame.

Swerving while braking is a very concerning symptom. In the majority of cases, the front end of the vehicle will experience considerable dipping.

Because of the dangers of applying the brake too quickly, it is imperative to address the problem soon if this occurs.

In the rain, this problem is even more deadly.

Stopping the automobile will take a little longer, although this is difficult to notice because the shift is subtle.

How To Test Shock Absorbers

If you fear that your shocks have been broken or if you simply wish to examine them, there is a simple method to do so.

Push the front of your car in an up and down motion, then stop abruptly. In proper working order, the car’s shocks will put an end to the motion.

Your shocks may be worn out and need to be replaced if your vehicle is constantly going up and down.

You can also test your shock absorbers in different ways. Shock absorber testing can be accomplished in a number of ways, all of which are described in detail on wikiHow.

It is important to keep in mind that this test does not cover struts.

How To Test Struts

Due to their placement and purpose, struts cannot be tested in the same way as shock absorbers.

The only method to tell whether the struts are worn out is to take the car out for a spin and look for any evidence of rattles, shaking, or nosedives.

If you intend to drive the vehicle, make sure you do so in a safe location and observe all local traffic rules.

Cost Of Replacing Shocks And Struts

Although 50,000-100,000 miles is considered the typical life expectancy of shocks and struts, there is no way to know for sure.

It is advised to replace both shocks and struts on the same axle while doing so.

A wheel alignment isn’t necessary when replacing shock absorbers rather than struts because they don’t impact steering, camber, or caster angles.

There is a significant price difference between struts and other parts of a vehicle. Wheel alignment is typically included in the $400-$1000 range for replacing a set of struts.

Your car’s suspension plays a crucial part in absorbing all of the bumps and jolts that come from bumpy roads and potholes.

Shocks and struts are often used interchangeably, but it’s crucial to know the difference between the two because of their price and purpose.

Struts perform the same function as shocks, but they also aid in steering and support the suspension structurally.

As a result, whereas shock replacement does not typically necessitate a wheel alignment, strut replacement almost always does.

Shocks and struts may need to be replaced if your vehicle begins to behave abnormally, such as trembling, swerving while braking, or tilting in the wind.

By pushing up and down on the front or back of the car, you can conduct a short test for shocks; if your vehicle continues to “bounce” after you let go of it, your shocks are most likely defective.

The only way to test your struts is on a road in a controlled situation.