After acquiring a car, it is inevitable that certain parts will need to be replaced at some point, whether due to wear and tear, corrosion, or an update. Changing the oil filter is one of the most important things you can do to keep your vehicle running smoothly.

It might be difficult for some car owners to detect if their oil filter needs to be replaced. The waste and fine particles carried by oil as it flows to the engine are captured by oil filters.

You should be aware of them since they play a crucial function in keeping the engine clean (by preventing tiny particles from entering the engine).

What Happens When Your Car Oil Filter Goes Bad?

Synthetic oils are generally considered to be cleaner than conventional oils, but what about the possible contaminants that may be located along the path that oil takes to reach the engine of your car?

Your engine’s oil filter is responsible for keeping contaminants out of the engine and allowing only clean oil to pass through.

Filter failure means that all of the debris and particles it picks up on the path are going to flow directly into your engine’s combustion chamber.

When these particles are continually introduced to the engine, they build up and precipitate out as lumps. For example, a lack of efficiency could lead to other concerns with the vehicle’s engine performance.

Oil filters, on the other hand, should be replaced on a regular basis if you want to maintain your engine operating at top efficiency.

What Could Cause an Oil Filter to Be Damaged? 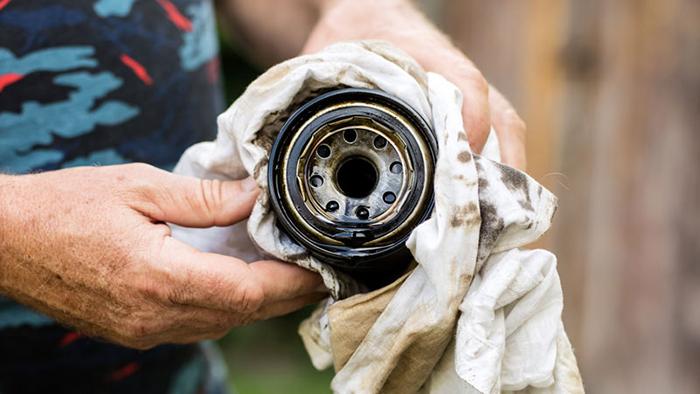 Over time, oil filters degrade and become less effective. However, there are several acts or practices that could accelerate the rate of deterioration. What is causing oil filters to wear out and need to be replaced?

Most likely, you’ve been using the improper engine lubricants and oils.

You may not have noticed, but the filter seals need to be replaced.

The filter was installed incorrectly.

You purchased a bad oil filter at a low price.

Oil filters can deteriorate more quickly if these factors are present. Now, how can you tell if it’s time to replace your oil filter?

Damaged or malfunctioning oil filters cannot be seen physically, and simply looking at one will not tell you whether or not it needs to be replaced.

Because of this, determining when an oil filter needs to be replaced rests on your ability to recognize these indicators when they first appear. If you ignore these warning signs, you run the risk of causing more harm to your engine than simply changing a faulty filter.

It’s not a big deal if exhaust fumes are a little smelly. The first clue that something is seriously wrong with your engine is when you begin to notice unusually dark exhaust fumes.

The black hue could be due to an oil filter that is clogged, which can allow oil to flow into the exhaust system. It’s much more crucial if the vapors give out a burning smell.

There is a good chance that your car isn’t accelerating as swiftly as before since it has been infiltrated by some debris. Earlier in this post, the author a stated that “the oil filter determines the efficiency of your car engine.”

If the filter is blocked or damaged, contaminants from the environment can enter the engine, reducing its performance and, if left untreated, increasing the risk of an early engine breakdown.

When You Start Hearing Metallic Noises As You Drive

If the oil filter becomes clogged, less oil will be able to enter the engine, and the engine appears to require a large amount of oil to run properly. You’ll hear noises while driving if the metal components scrape against each other even if it doesn’t get very hot.

If you hear what sounds like metal grinding on metal and the sound is coming from the engine, don’t dismiss it as a minor problem; instead, pull over and investigate the cause, which is usually an oil filter malfunction depriving the engine of the necessary oil quantity to function properly.

A word of advice: once you’ve replaced the oil filter, have a professional inspect the engine to see if any metals have broken. If so, have that fixed right away. After replacing the engine’s components, make sure to add enough oil to lubricate them.

Sputtering can be caused by clogged oil filters, and you may start to hear cracking noises when driving (especially during acceleration). Your automobile may not accelerate as quickly as usual if you have an oil filter that needs to be replaced.

Still looking for ways to tell whether your oil filter needs to be replaced? There are more symptoms to look out for, so keep reading.

On the dashboard of today’s cars, you’ll find an oil pressure gauge. If the oil filter is in good shape, the indicator will show a constant level of oil pressure.

The Engine is Overheating

Insufficient oil in the engine can lead to overheating, which occurs when metallic components rub or grind against one other, causing an increase in friction.

Although an increase in friction will make a significant amount of noise, it will also cause the engine to overheat.

Not only does overheating destroy the car’s entire system, but it also has the potential to harm the engine itself. The “Check Engine” light will flash on your dashboard as a reminder to take action quickly.

How frequently should I change the oil filter?

Changing the oil filter is something that some individuals do at the same time as changing the oil. However, oil changes occur so often that you may need to change the filter up to two times in a short period of time.

Changing oil filters every 7,500 miles or more is recommended by several OEMs. For the most up-to-date information, consult your vehicle’s owner’s manual.

How to choose the perfect oil filter for your car?

As it turns out, each of these belongs in the guide. Before paying for the filter, you may always check to verify if it fits your vehicle’s specified location. The threads and/or gasket diameters of oil filters are so similar that it’s difficult to tell them apart.

Hopefully, this post has helped you understand how to detect if your oil filter needs to be replaced, as well as some helpful hints.

Since there is no physical method to tell if your oil filter is damaged or blocked, the best practice is to be proactive and pay attention to any unusual changes in your car’s performance. It’s a great day.