Signs You Need To Change Your Fuel Filter Updated 01/2023

Misfiring, hard starting, decreased engine performance, and other symptoms may indicate that you need to replace your fuel filter. However, there are many other signs of a faulty gasoline filter, which we’ll cover in greater detail later on.

The fuel filter is one of the most frequently overlooked parts of automobiles. There appears to be a general lack of interest in the importance of fuel/oil filters from both drivers and mechanics.

These components, however, are critical and can cause significant problems if they are not properly maintained.

After 50,000 to 100,000 miles, it’s time to replace your gasoline filter. However, some people have never replaced theirs since they started driving their car, and they’ve logged more than 150,000 miles on the odometer!

As it turns out, when a fuel filter is blocked or damaged, you’ll notice a variety of peculiar symptoms.

When To Change Your Fuel Filter? 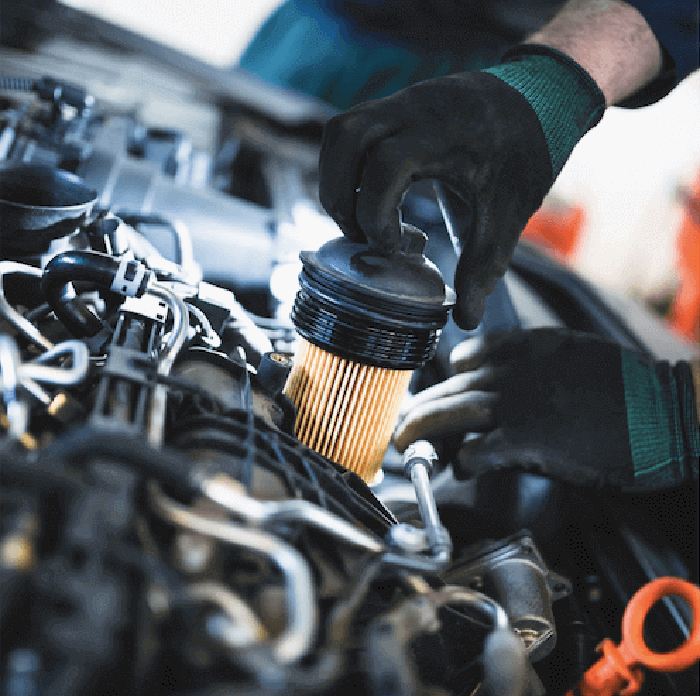 The fuel filter is just as critical as the oil filter. In order to keep dirt and fine particles from entering the engine, these filters are essential.

A malfunctioning fuel filter can prevent all of the fuel from entering the engine, or allow dirt to be mixed with the fuel.

If you’re wondering when to replace your fuel filter, here’s some advice: Fuel filters are easy to replace and don’t cost much money. There’s no optimal time to do it.

After 40,000 or 50,000 kilometers, you can change your gasoline filter. The ideal time to replace your fuel filter is a matter of personal preference.

It’s also a good idea to change the gasoline and oil filters more frequently as the automobile ages, such as after every 30,000 miles or 20,000 miles.

Even though it may appear inconsequential, the fuel filter is an essential part of the fuel pump and delivery system and has a major impact on engine performance.

Engine overheating, spitting, and other costly damage might result from a defective filter.. It’s crucial to inspect your fuel filter if you notice any of the following symptoms.

Signs You Need to Change Your Fuel Filter

The symptoms of a bad gasoline filter might vary from vehicle to vehicle, so you may not experience all of the ones listed here. When strange things start happening while driving, all you have to do is be proactive.

An engine or fuel system problem is frequently indicated by this primary symptom.

Clogged gasoline filters will prevent fuel from flowing into the engine smoothly, which means that the engine won’t be able to perform at its best.

It’s also possible for debris and dirt to get into the engine through a cracked or damaged fuel filter; this might cause the engine to run hotter than normal.

Engine performance is also harmed by carbon buildups caused by dirt and debris entering the engine.

If the vehicle’s performance drops significantly, it’s safe to assume that the engine or the fuel system is malfunctioning. With an OBD2 scanner or similar gadget, you can verify the situation.

On particular models from specific automakers, you’ll find the icon on the dashboard.

Fuel filter icons on the dashboard will light up when a filter is no longer working properly, exactly like the check engine light does when your car’s systems identify a problem with the engine.

It is possible that in some situations, if a car’s dashboard does not include a symbol for the filter, the check engine light may come on (illuminate).

In other words, if your check engine lights up or your fuel filter lights up, you should investigate and solve the problem right away.

Yes, one of the telltale symptoms that it’s time to replace your gasoline filters is a hard start. Hard starting can be the result of reduced fuel flow due to a clogged filter, as previously described.

Furthermore, in rare circumstances, the car won’t even begin to run. It’s common for this to occur when the filter has been ineffective for a lengthy period of time.

4. Inability To Drive On Top Speed

If you like to push your automobile to its limits, you’ll find that it struggles to accelerate when the gasoline filter is dirty.

Your fuel filter has to be checked if you find it difficult to accelerate up hills or on flat highways.

Engine misfiring can be caused by a number of things, but a clogged fuel filter is one of them.

Misfiring occurs when you notice an unusual amount of hesitation while driving; if the problem isn’t fixed quickly, it might lead to engine damage. Once more, a troubleshoot is required to determine the root reason of the misfiring.

How do you know when it’s time to replace your gasoline filter? All of the symptoms listed above could indicate a blocked or broken fuel filter.

A technician should be called if you notice any of these symptoms, but if you don’t feel comfortable doing so, you can pull out the gasoline filter and inspect it yourself.

Finally, your vehicle’s fuel efficiency can be impacted by a faulty fuel filter. As a result, you may discover that your car is using more gas than ever before. Other indicators may include sputtering and the automobile shutting down while you’re still driving.

Can A Car Battery Be Too Dead To Jump Start
Catalytic Converter Price Lookup Scrap Value
Nevada Tint Laws That You Need Know
What Is The Darkest Tint You Can Legally Get In Michigan?