The stench of burning oil can be a bothersome annoyance for drivers. Aside from the obvious inconvenience of not being able to operate the vehicle, this symptom could suggest a variety of issues.

An engine or gearbox problem might be detected by the odour of burning oil in a vehicle. Valve cover gaskets, cylinder head gaskets, and oil seal difficulties are all typical culprits, but a clogged air filter might also be to blame for the problem.

Where does the smell of burning oil come from? 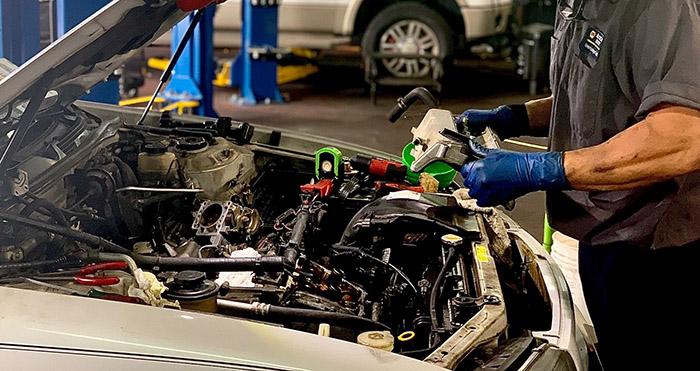 The scent of oil penetrates a car’s interior through one of the following:

As soon as the car’s interior is scented with burning oil, it’s apparent that there is a mechanical issue with the engine or transmission and attachments. It is possible to sense the foul odor in the engine compartment because of the presence of these odor-causing factors.

A good place to look if the scent isn’t coming from the engine is underneath the car, where the exhaust system can carry it for a long distance. The transmission or other under-car components may be the source of the noise.

The terrible smell of burning oil is perceived because the oil gets on the heated walls of the cylinders, on the exhaust system, and/or on other components associated to it. Engine malfunctions are the most common cause.

As the engine heats up and the oil begins to burn away, the odor of an oil leak becomes more noticeable. If oil enters the exhaust system while the engine is running, symptoms begin to show very quickly. The transient odor may be caused by oil or chemical particles from the road surface entering the exhaust pipe when it rains or snows.

With the help of a few symptoms, you can pinpoint the specific spot. This means the stench is likely coming from your car’s engine compartment if you can smell it while driving with your windows open and the scent intensifies or disappears when you switch on the interior ventilation or activate the recirculation mode.

A stench coming from under the car is one that you can detect even with the windows open and that disappears after all the windows are closed. It’s possible to see blue smoke rising from the exhaust pipe as well as smell oil when it’s discharged directly through the exhaust system.

Smell of burning oil coming from the engine compartment 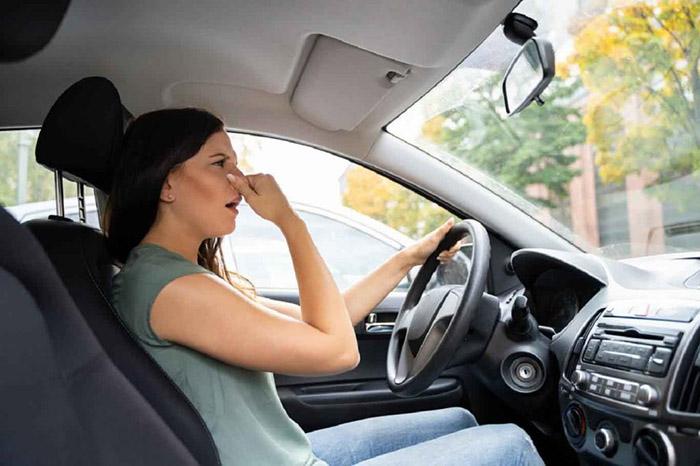 Checking the source of the odor can be done using many approaches. The stench can be traced to the engine compartment by scrutinizing the engine visually and looking for traces of oil.

It is possible that the oil traces are there because of recent repairs. When the engine’s oil was changed, a small amount of oil spilled over the engine and wasn’t properly cleaned up. Transmission oil is also available in this form.

It’s possible that the valve cover, crankshaft, and cam seals are leaking, or that the crankcase ventilation system is blocked or defective. Also, the cylinder head gasket may be deteriorating. It’s recommended to take your car to a mechanic for an in-depth look at these problems because they can be tricky to diagnose on your own.

It is possible to try to tighten the cover fasteners if oil is leaking from under the valve cover gasket. If that doesn’t work, a new gasket must be installed.

For example, oil may be leaking from the crank or camshaft seals if the crankcase ventilation system has been blocked or wear has taken place.

If the oil level is normal, the air system is not clogged, and there are no indicators of high pressure, the seals must be replaced (no smoke comes out when the oil filler cap is opened).

There is some difficulty in dealing with oil leaks caused by a faulty cylinder head gasket, and it is best to seek help from a mechanic.

There may be an issue with the cylinder head gasket that affects not just oil but also coolant, which is mixed in the cooling system and cylinder block and can leak.

Smells of coolant and white smoke from the exhaust, stains in the antifreeze, and an abnormally high or low antifreeze level all suggest a problem. The sooner a gasket is replaced, the better.

Smell of oil coming from under the car

This is similar to the preceding situation when traces of oil suggest a problem but finding them requires access to a pit or an elevator. The transmission input shaft oil seal or the crankshaft oil seal are the most common sources of these oil leaks. Only by removing the transmission can the precise cause be established.

The oil sump may also be leaking owing to a damaged gasket, a loose drain plug, or an o ring that has deformed. To get rid of the problem, worn parts must be replaced.

Transmission fluid is deeper in color, has a sulfur smell, and has a thinner oil layer than motor oil, all of which help us pinpoint the problem and separate it from other types of oil.

Make sure the exhaust is clean before checking the engine compartment and under the vehicle for oil stains. A bad smell, oil splatters, and blue smoke are all signs that something is seriously wrong.

The problem could be caused by worn piston rings, worn valve stem seals, or a fault with the turbo in turbocharged automobiles. To find out what’s causing the problem, you’ll need a full engine diagnostics.

Not only can oil splatter point to a problem with the engine or transmission, but the stench that comes along with it can be downright revolting.

Even for a trained professional, diagnosing and repairing oil leaks can be extremely difficult and time-consuming. This is why it is advisable to choose an approved repair facility when you want to address oil leaks.